On 7 March 2013, Kevin Rudd was a lead speaker at a pro-population growth meeting held by the "Urban Development Institute of Australia", which is a property developer body that lobbies continually for higher immigration to grow Australia's population. Now Mr Rudd is our Prime Minister, but he still sounds as if he is working for a bunch of property developers. 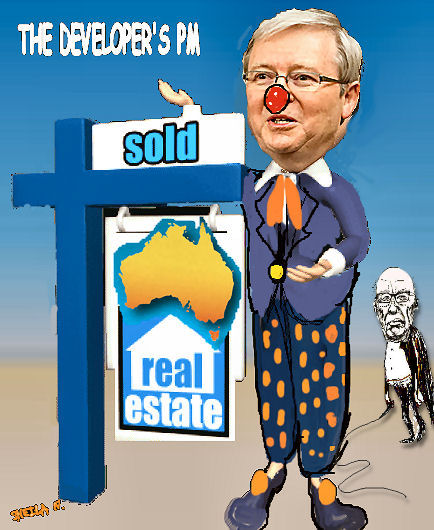 It's sustainable if you say it is

Rudd and Murdoch: one setting only

Mr. Rudd is in favour of a Big Australia. I believe (after much reading on the subject) that it will be unsustainable and will put our population in real peril. Australia is a desert continent with very poor soils. Because of fossil fuels we have been able to produce more food than ever before from this continent, but this will come to an end. 2 reasons 1. fossil fuels are finite and there are strong indications that global oil production has already peaked 2. Unless scientists are wrong about GGEs and climate change, we must stop using Fossil Fuels or we won’t have an environment as we know it.

Mr. Rudd is glib and fanciful in what he says. Julia made a good start when she said she was in favour of a “sustainable Australia” rather than a “Big Australia” but then the whole issue was buried in Tony Burke’s report which recommended population be regionalized – thus sweeping the problem of population numbers into another realm and the government went on to preside over a huge migration program which is more than our natural increase and thus more than double our population growth rate.

Rudd’s intention to continue “ Big Australia” is contained in the quote “ then of course the country can grow”.

Population growth doesn't pay for itself: we do

A sign that our existence in Melbourne is going down hill is that Victorians are already paying more and more for water because of the desalination plant which would not have been necessary had the government not anticipated high population growth and that Melbourne will be a megalopolis. I can see a time when people won’t be able to pay for the water they need.

WA uses almost exclusively desalinated water and ground water. This is a recipe for collapse. Perth has the highest population growth rate of any capital city and comparable to many 3rd world countries.

The Victorian State of the environment Report 2008 showed that all environmental indicators in Victoria were declining because of human activity and population pressures. Since then the population has kept on growing. I understand all reports from other states have shown the same.

We are already in environmental decline. The country is so delicate, so immensely biodiverse and intricate but since the European invasion we have been stomping all over it with hob nail boots.

Division of finite resources amongst more is not growth

At some time in our past history, when Australia had a sub-optimal population, adding to the numbers could have added to our wealth on average.

However there are no longer industries which require additional labour to produce additional goods, services or food for either domestic consumption or export. So, adding to Australia's population through immigration cannot rightly be labelled 'growth'. It can only possibly lead to our finite stock of natural resources, including arable land and living space, being divided amongst larger numbers of people. It can only make Australians on average poorer.

In addition, an ever greater proportion of our wealth has to be spent on roads, freeways, parking lots, public transport, power generation, government bureaucracy, etc. to keep our ever-expanding cities working.

It is time that our economy was properly investigated so that we can find out who gains from degrading our environment and making us poorer overall and how the economy can be fixed so that we can achieve full employment without the need to continually add to our population.

AUSTRALIA FIRST PARTY PRESS RELEASE National Wattle Day 1st September 2013 Nominations for the Native Australian Award "THE ORDER OF THE WATTLE BLOSSOM" are invited from Australian Citizens GENERAL CRITERIA. Persons nominated should have displayed a commitment to Australia's cultural heritage, our national values, our native soil, or any other suitable aspect that has contributed to the advancement of our European derived civilisation. Nominations may be either Native Australians, members of the Australoid Race, or any assimilable immigrant who has particularly exhibited having taken up the Australian Spirit. Please forward particulars, including the following information to the address below before 25th August. Name and address of nomination; suggested award citation. Include your own name and address. In keeping with past tradition, up to five awards can be granted. AUSTRALIA FIRST PARTY www.australiafirst.net Email: ausfirst [AT] hotmail.com P.O. Box 223 Croydon 3136 National Contact Line 02 8587 0014 Voting for other than AUSTRALIA FIRST is just a waste of time