Animals Australia organised rallies throughout Australia today and Victoria's was on the steps of Parliament House in Spring Street Melbourne at 1.00pm. What a united crowd it was that started to assemble well before 1.00 p.m. The eventual numbers were huge. I would not like to hazard a guess but to give the idea, I was standing on the footpath near the bottom of the steps and could not see my way out in any direction. People covered the footpath all across the steps, up the steps and well across Spring Street. It was a vey large crowd. Pictures inside. 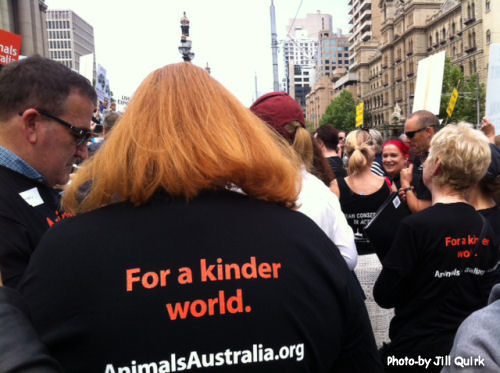 Hon. Kelvin Thomson gave an impassioned speech highlighting that more than 90% of animals raised for meat were processed in Australia and that our task is to make it 100%. 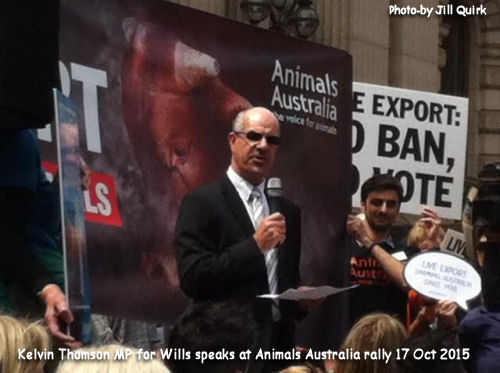 Mr Thomson also pointed out the frustrations of negotiating with agriculture minister, Barnaby Joyce who says he cannot do anything regarding breaches of the laws with respect to exported animals (e.g. being sold to unapproved outlets overseas) nor says Mr. Joyce can he do anything after a breach has occurred - a recipe for inaction! 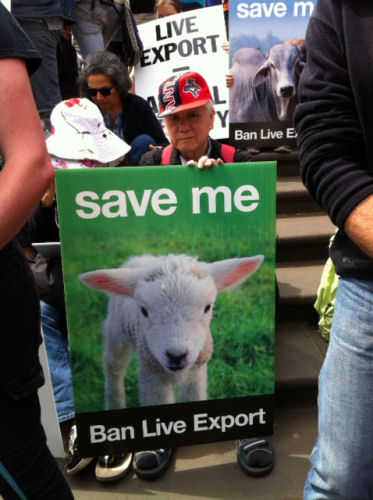 Other speakers were Hon. Adam Bandt MP, Dr. Liz Walker, President of RSPCA, and of course Lyn White President of Animals Australia who told an absolutely heart rending story of an experience with an Arabic speaking colleague in a Middle Eastern country in a slaughtering shed where the colleague stayed amidst a very unsympathetic, bloody multiple animal slaughter to comfort 2 terrified sheep who were tied up watching this in terror waiting for their turn. 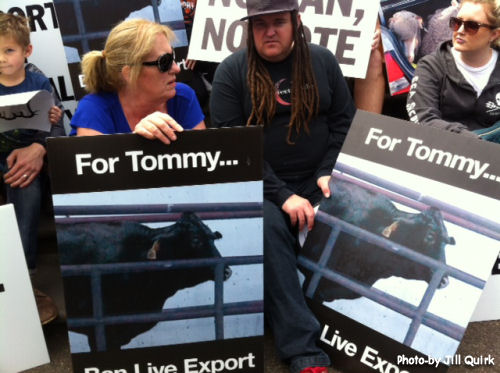 Animals Australia urges everyone to contact their MPs to give them the message to stop live animal export. 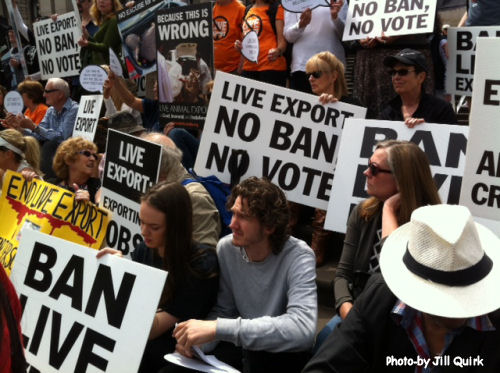 Even some of the exporters themselves are complaining about live export cruelty. After evidence of sledgehammers being used in Vietnam to kill cattle, live export industry bosses finally recognised in March 2015 that there was a serious problem in Vietnam. They responded with a “crisis meeting” and a “6 point plan”. The fact that 5 out of 6 points in the industry’s action plan address things the industry should already be doing reveals just how dire the situation in Vietnam was. Sending live animals to under-developed third world countries inevitably means that there's going to be little control over care and slaughter of animals. Animals Australia says it has lodged three more legal complaints relating to the video footage, concerning widespread ESCAS breaches during the recent Eid al Adha festival, involving thousands of sheep in Kuwait, Oman and the UAE. Already Saudi Arabia is under fire for their massive breaches of human rights. How can animals be protected with any "animal rights"? How can the ESCAS system be controlled, from Australia, once the animals are in the Middle East? If the rules were being properly enforced then re-offending export companies would be facing criminal charges by now. “The situation in Kuwait during the Festival of Sacrifice was particularly egregious as Animals Australia had warned the Australian government eight weeks earlier that export laws were still being breached there, with hundreds of sheep facing brutal slaughter,” said Lynn While, chief investigator for Animals Australia. Rather than focusing on addressing breaches of regulations, exporters were allowed to send three more shiploads of sheep to Kuwait and those hundreds turned to thousands of animals brutalised during the Festival of Sacrifice - of Festival of Suffering. Animals Australia’s investigators witnessed terrified sheep being dragged through the streets and stuffed in car boots in suffocating 48°C heat, in the three Middle East markets. Wellard chief executive officer Mauro Balzarini said ESCAS compliance costs importers hundreds of thousands of dollars in lost sales and similar amounts in extra staff and costs, for exporters. The system is broken, but one reason only, why export laws are being ignored and that is because there are no meaningful consequences for breaking them! There's unconditional support for the live export industry, from Barnaby Joyce and our government, because the industry has become "too important" to lose! Thank God for Animals Australia. How can anyone watch this footage and continue to support this vile trade. Is this industry and government incapable of compassion? Continual claims that ESCAS works, yet they tell that to the 10,000 sheep that were brutalised. There should be no compromises, or agreements. The live export trade must end!