"Mark, I am fully aware that your job must be challenging and frustrating at times, but ignoring the elephant in the room – the increasingly obvious negative impacts of population growth - is putting EV and all who care for our environment on a never ending hamster wheel of frustration, disappointment, and ultimately hard earned campaign money down the gurgler. Unchecked population growth is having a ratchet effect, steadily increasing the pressure on the environment and reversing previous efforts to protect it. " (Jenny Warfe) 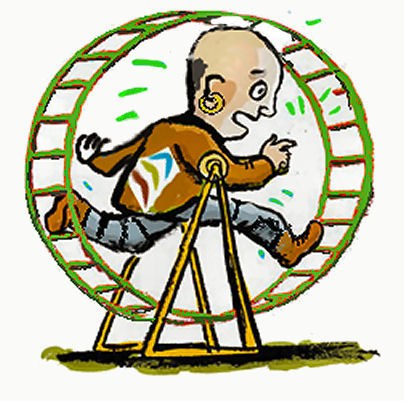 Thanks for your recent response to my concerns about Victoria’s population growth being the biggest threat to Victoria’s natural environment, and apologies for my slow reply.#1f497d"> Congratulations too on EV’s campaign on moving away from coal#1f497d">.

1.      Population policies are largely set at the national and international level and it is a global issue

2.      Solutions cover numerous issues on which you (EV) are not the experts

1.      Population policies are largely set at the national and international level and it is a global issue.

Climate change and renewable energy are National and International issues too, but EV has no problem running effective campaigns on these issues. Of course everything about climate change, energy and water use has numerous variables, but it is disingenuous to ignore absolute numbers of people as one of the most impactful variables. Melbourne’s population is currently increasing by around 2,000 people per week – over 100,000 per annum - (~ 60% of which is migration), so it is ridiculous to ignore this ever increasing, compounding, input#1f497d"> and its effect on energy and water consumption and other ecological services.

I recently gave a talk on sustainability to the Mornington Peninsula Shire and#1f497d"> made these points:

·         Victoria has the highest population growth rate of any state.

·         This leaves less $$ to protect local biodiversity – an issue which Councils and environment groups keep saying they are concerned about.

·         Australia’s growth doubled from 1% to 2% per annum in the last decade, so we must now spend an extra 7% of government revenue on  infrastructure just to avoid infrastructure deficit2 – let alone what we should be spending to protect the environment and prepare for climate change.

·         All this means that, contrary to the Growth lobby’s rhetoric, population growth is not an investment, it’s a recurrent cost – a drain on local and state government budgets

State and local governments, NGOs and community organisations are left to mop up the excesses of the population Ponzi scheme currently driving our economy#1f497d">. Funding for our task is hopelessly inadequate. I suggested to MP Shire that they should lobby the Victorian government with these facts, and request the Victorian government to lobby the Federal government via COAG and relevant Ministers. State and local governments#1f497d"> should also include population facts in locally produced information on biodiversity and the environment. I make that same suggestion to EV.

In our favour, I think the tide is beginning to turn on the until now unquestioned benefits of population growth. The mainstream media has run dead on the issue for a long time, no doubt to placate vested interests, but perhaps they can no longer ignore the failing infrastructure, falling living standards, housing unaffordability and appalling growth in homelessness, etc. etc.  Here are just a few examples of former Growthists changing their tune:

·         Professor Judith Sloan – Economist and contributing Economics Editor at The Australian (!) is starting to talk about the downside of population growth, See: Judith Sloan

The broader impacts from any increase in Net Overseas Migration (NOM) also need to be taken into account. Increasing numbers of immigrants can adversely affect the quality of Australia’s natural and built environment unless governments take action to mitigate congestion and other pressures. Even with such action, there are additional costs for the community as environmental services have to be replaced with technological solutions. While there are various estimates of the cost of these solutions, the actual cost can be lower due to economies of scale, or higher if environmental services are currently ‘free’. Moreover, some environmental impacts, such as the recreational value of near empty beaches and the value of biodiversity, are hard to measure, let alone monetise. Yet, such considerations should be part of the broad cost-benefit assessment underpinning decisions on the long-term migrant intake. To inform this debate, the Australian Government should publish projections of the impact of varying rates of migration and population growth on the natural and built environment. This would also help to address community perceptions (as expressed by participants) that debate about the impacts of immigration is lacking

·         The Grattan Institute in 2014 found that the extra money State governments are forking out for infrastructure fully accounted for their burgeoning deficits - You know, those deficits that cause them to cut social and environmental programs. See: Grattan Institute

·         Commonwealth Bank. In its recent paper "How does Australia look on a per capita basis?", quoted at: Business Insider

So, if former “economic rationalists” have even#1f497d"> started talking about the financial downsides of population growth without the usual mutterings about racism being slung at them, surely it’s time for us to talk about the ecological downsides? NGOs and community groups who care about our environment are being handed an opportunity to add ecological degradation to the growing list of down sides from population growth. The real issue is about bums on seats, not the colour of them.

Colleagues have suggested a campaign along the lines of “Canberra is the problem”. As we agree it is federal immigration policies out of Canberra driving most of the growth and we are growing by about a Canberra-worth (or maybe Canberra-worthless) of people every year, an advertising campaign could be run showing Canberra’s popping up all over a map of Australia next to already big cities, or swamping our natural attractions, habitat for other species etc. (Just this week, C7 reported on distressed kangaroos becoming common in Melbourne’s suburbs, stating that spreading suburbs are wiping  out their habitat).

Indeed, the Victorian government itself has produced evidence of the negative impacts of population growth in its State of the Environment Reports 2008 and 2013 showing that population pressures were adversely affecting Victoria’s environment. So, it’s hardly fringe opinion that I am propounding. It’s time to remind government of their own#1f497d"> findings.

#fdfdfd">2.      Solutions cover numerous issues on which you (EV) are not the experts. My response is:

Non experts influence public debate all the time on a vast range of issues. Politicians aren’t experts in all issues, but they happily pontificate on anything that appeals to their particular world view or party dogma. Indeed their cultural/religious beliefs, which should have no role in good government, are influencing#1f497d"> some policies which have a negative impact on the environment. Environmentalists should be naming that problem.

It is a cop out for environmentalists to pronounce that because we are not say, demographers, we cannot have a reasoned and informed position on human population impacts#1f497d"> on the environment – which we purport to care deeply about and may have spent years studying and working in. As long as we are well informed and use facts what is there to be scared of? At least we should have a go in my view.

It’s interesting too,isn’t it, that Bernard Salt is not a qualified demographer but he calls himself one, is considered an expert, and his opinions are widely publicised on a wide range of issues. Conversely, the mainstream media rarely consults Sociologists/Demographers such as Dr. Katharine Betts and Dr. Bob Birrell from The Australian Population Research Institute.

Mark, I am fully aware that your job must be challenging and frustrating at times, but ignoring the elephant in the room – the increasingly obvious negative impacts of population growth - is  putting EV and all who care for our environment on a never ending hamster wheel of frustration, disappointment, and ultimately hard earned campaign money down the gurgler. Unchecked population growth is having a ratchet effect, steadily increasing the pressure on the environment and reversing previous efforts to protect it.

There is no logical end point to infinite growth with finite resources. Unless we address the (irrefutable mathematical) problem of compounding population numbers, we are sitting ducks for exhaustion, disappointment and job dissatisfaction – and of course environmental degradation. #1f497d">

Perhaps a coalition of well regarded community, planning and environment groups could support one another to really get stuck into the issue?

As Paul Ehrlich has said, "Whatever your cause, it's a lost cause if we don't stop population growth". Obviously that applies just as much in our local area as globally.

Letter to the editor from Mary Drost about Melbourne at 8m

http://www.heraldsun.com.au/news/victoria/future-melbourne/how-were-preparing-for-melbournes-population-to-top-8-million/news-story/b66db8e05d1deedbb7c1cf2733ffcdff?&utm_source=Herald%20Sun&utm_medium=email&utm_campaign=editorial&mid=2322488 Letter to the editor The article about population this morning, the 14th, is very disturbing. Why wont any government see that Melbourne and Sydney are drowning under such high immigration. Very few first world cities are as large as we are now and only very very few are 8 million - London yes and that works only because of the incredible underground railway network that started in 1863 and is still growing. Melbourne is currently $200 billion behind in infrastructure and they talk about spending $100 billion over the next 30 years - imagine how far behind we will be by then. Without the infrastructure we will be third world. Having lived in Jakarta and seen it happen there, I dont want to see Melbourne becoming am overcrowded polluted gridlocked nightmare. Regionalisation has merit but wont work unless there are jobs out there and migrants are compelled to go there, but as migrants all want to go to Sydney or Melbourne the only sensible solution is to reduce immigration down to a manageable number, not increase it to 400,000 a year which is what they are talking about. Melbourne simply cannot stay remotely liveable the way we are being forced to cope with 100,000 a year. It is time for the State Government to tell the Federal Government that Melbourne is full. Mary Drost