This article gives a 'good cop bad cop' analysis of Australia's two party history since the fall of the Whitlam Government. It looks at the evolution of economic theory and foreign involvement in wars over this period. 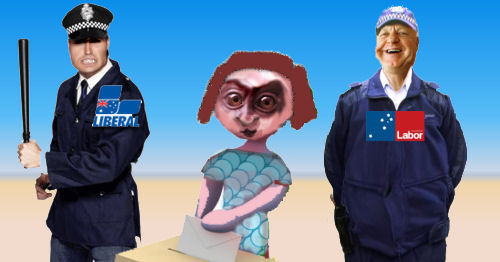 As United States whistleblower Christopher Boyce (aka 'the Falcon') revealed on SBS Dateline on 18 February 2014, after the CIA helped to destroy the Whitlam Labor government in 1975 it attempted to consolidate its victory by buying influence amongst newer leaders of the Labor Party.

Consequently, when Labor finally won office again on 5 March 1983, the reforms of the Whitlam government were abandoned. Instead the Labor government of former ACTU President Bob Hawke helped pioneer in Australia the adoption of neo-liberal 'free market' economic policies that would later be adopted around much of the rest of the world. Australian finance and industry was exposed to globalised international competition, including the removal of government control over the Australian dollar's exchange rate (i.e. the “floating of the dollar”) by then Treasurer Paul Keating in December 1983. Government services and the public servant numbers were reduced. Also publicly owned assets were privatised with no electoral mandate – QANTAS, TAA (the domestic air service), the Australian National Line shipping company and the Commonwealth Bank.

Since 1983, Labor governments have generally played the role of 'good cop' whilst Liberal/National Coalition governments have generally played the role of 'bad cop'. Prior to his defeat in March 1983, 'bad cop' Malcolm Fraser imposed a 12 month wages freeze during which the value of real wages fell 9.1% as a result of cost of living increases not being matched by wage rises. Subsequently the 'good cop' Hawke Labor government with the help of ACTU President Cliff Dolan imposed the Prices and Incomes Accord on the Trade union movement. The accord allowed restricted wage rises and promised increases in social spending.

Labor has also backtracked away from Gough Whitlam's opposition to war. In 1991 the Hawke government sent troops to fight in Operation Desert Storm after Iraqi dictator Saddam Hussein had been tricked into believing that the United States would not retaliate should Iraq take action against neighbouring Kuwait for slant-drilling into Iraq's oil fields. Sanctions imposed against Iraq after its 1990 invasion continued until until after Saddam Hussein was overthrown after the 2003 invasion. This continued even after bleeding heart' Paul Keating became PM in December 1991. Many hundreds of thousands of Iraqis died as a result. One estimate puts the death toll at more than 1.5 million including 750,000 children under the age of 5. Other wars, which gained bipartisan support from the Labor Party include the invasion of Afghanistan in 2001 and the invasion of Libya in 2011.

Both sides of Australian politics, with a only a few honourable exceptions, are shamefully complicit in the United States' proxy terrorist war against Syria which started in March 2011. In that war, 210,000 Syrians have so far died at the hands of jihadist invaders from nearly every corner of the Muslim world and a number of other countries . Australia expelled the Syrian ambassador under the pretext that the Syrian government had allegedly massacred 108 of its citizens, including 34 women and 49 children at Houla on 25 May. This allegation that the Syrian government had massacred Syrians in a region particularly renowned for its strong support for the Syrian government is contrary to common sense and all credible eyewitness and forensic evidence.

Both sides of parliament have also sided with the neo-Nazi government of Ukraine which came to power in February 2014 as a result of a CIA-orchestrated coup. Both sides have also unquestioningly accepted the lying mainstream newsmedia narrative that the 298 passengers, including 27 Australians, aboard Malaysian Airways Flight MH17 were murdered by East Ukrainian self-defence forces with a BUK surface to air missile on 17 March 2014. This is contrary to all eyewitness and forensic evidence, including the photos of the pilot cockpits apparently riddled with cannon shells on both sides indicate that MH17 was shot down by 2 Ukrainian Sukhoi 17 fighters.

Both Labor and the Coalition have voted in Parliament to support dragnet collection of all our Intenet and telephone communication meta-data by our spy agencies. This is in spite of whistleblower Edward Snowden's warning that this has never prevented even one act of terrorism.

The above are only some examples of how corrupt Australian and global politics has become since 1975. However while there is still a free and open Internet, and a trade union movement with capable leaders we still stand a chance of reversing the damage and re-establish a quality of democracy comparable to what we once enjoyed.