Zaky Mallah and the Zombification of ABC Australia

Material has been added to this article on 1 July 2015. The general deception and essential horror active within the current bullshit storm being unleashed around the ABC and Mallah is fully revealed by simply reading the factual account of Mallah's background, linked below, and then considering what was actually said in the Q&A program in context to that factual background. 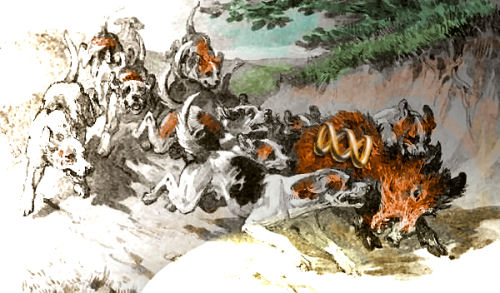 As stated at the outset by ABC chief Mark Scott, Mallah had a democratic right to ask the question that he did on that program. Beyond that though, every Australian citizen had the right, and a vital and pressing need, to hear Mallah's question and the Minister's answer to it.

In true fact and context, it was Ciobo's answer that was horrendous. His reflex response was steeped in ignorance, intolerance, exclusivity and malice. It flashed a stark, Freudian insight into this current government's purpose and will toward our national 'Freedom and Security'.

But having correctly established Mallah's democratic right, the ABC Chief then immediately resiled from his base position to also acknowledge that 'it was a mistake' for Q&A to have Mallah on the show.

What the hell? How? Why?

That weak-minded contradiction gave the hounds of fascism ground to swerve around the sound bulwark of Scott's fundamentally correct, crucially important argument. This avenue of circumvention allowed the rabid attack to proceed unabated; upon the ABC, upon Scott's compromised 'defence', and upon democracy itself and the free social dialogue necessary to its healthy function.

True to type, the ABC journalist group have since let these baying hounds set the parameters of the ensuing media 'conversation'. Every attack dog from every available right-wing brood kennel has emerged to swell a lobotimised howl for the ABC'c blood. The cacophony is now so loud, so pervasive and so disturbing that even moderate liberal puppies like John Hewson apparently feel they also have to join in with harmonic yelps, lest they be found socially and personally wanting in some indeterminable but viscerally uncomfortable way. To my mind, Turnbull has established beyond all doubt that he is utterly amoral and unable to control the fascist horde he sleeps with, or that he has fully resigned himself to being a part of it as the pragmatic mechanism for best maximising his own personal achievement. Labor and the Greens are both absent from the fray regarding the truth on this matter.

Faced with this unmoderated, slavering onslaught upon their own character, and quite possibly their own professional existence, the ABC journo group has proven unable to execute a competent and forensic examination and prosecution of the pertinent facts and context of the situation. No wonder they fail so abysmally on critical issues that are removed from their direct, immediate personal well-being, such as population, housing affordability, etc. They can't even effectively argue the case for their own professional freedom and identity. How then can they possibly act in any useful way to mediate due protection of our rapidly diminishing democracy, social equity or resource sustainability. Especially now that they have gone down so badly in this ugly episode of media and party political gang rape. PTSD now forthcoming or what?

Things are not at all well in this Nation at present. Very clearly our democracy now depends heavily upon citizens acting to inform themselves and each other. The mainstream media cannot be relied upon.

Within all of this it is also imperative to recognise that the frenzy and consternation of this attack upon the ABC has served to utterly obliterate any useful attention toward the nature of Government intent and character that was revealed by Minister Ciobo in his interchange with Zaky Mallah. Maybe the ABC is not in fact the primary objective of the current political exercise. Rather it is a subsidiary victim for the aggressors, although a desirable one nonetheless.

Notably, and perhaps shamefully, Tony Jones initiated this cover-up of spontaneous, 'pants-down' revelation of awful truth when he immediately declared that Zaky's final incisive observation be 'struck from the record'. What on earth did he mean? Zaky's comment can't be excised from the public record as its recording is not limited to a contained, formal transcript from which it can be simply and completely struck. It is recorded on public, readily reproducible media. It would have to be blasted out of its public domain existence by a campaign of mis-information and intimidation, which is exactly what has now been achieved.

Surely Tony's declaration at the time wasn't the invocation to begin this ensuing spiritual cleansing. Rather, was he simply prescient of its imminent arrival and reflexively at pains to be not too far on the wrong side as it unfolded? Which begs the question, just how well trained are the ABC cohort? Are they Pavlov's reporters, conditioned to familiar non-threatening ground by the constant bell-ring of the baseless but unchallenged accusation of them 'all being lefties'. My god! Why do they fail to challenge this inaccurate, essentially meaningless and effectively limiting generalisation of themselves as a work-group? Do they actually embrace the wistful but practically disabling and pathetic romance of it? Where might such a high profile embodiment of meaning render a real 'leftie'? As a pathological nut-bag or extremist? No wonder then that the parameters of social discourse have mutated so far to the right. And so excruciatingly clever to employ the self-absorbed narcissism of 'authentic' and wannabe celebrity journo's as vectors to deliver this mutation.

If the ABC journo group do actually embody the contemporary definition of being 'lefties' then I am indeed down a deep, dark rabbit hole and am in desperate need of the right drugs and/or implements to get back out again... and quickly please. Mind control is not the product of compulsion by the aggressor. It is one of submission by the victim. However no one person is an island. At some point within the labyrinthe of perceived reality and illusion we all need to access, and also to provide, some collective help. 'Invasion of the Body Snatchers' is an old film with a modern message in this regard. I've no doubt that Zaky could certainly do with some collective support right now. He deserves recognition of the merit of his basic position, and for his stoic courage and relatively calm consistency in the face of persistently mendacious attack, unreasonable accusation and confected collective hate being variously levelled at him by the voices of political neanderthals and 'progressives' alike. In this regard, Waleed Aly should very particularly bow his head in shame over his own efforts interviewing Zacky on a recent episode of The Project.

Thanks Zaky. Your effort has helped me to understand things more clearly than I did. However, with that understanding I also do feel more endangered, not by you, but by the horrific nature, breadth and scale of the social response to you. By many real measures, this country is not as safe as it once was. The enemy is how we think, or are lead to not think, about important things.