The new refugees in the first world 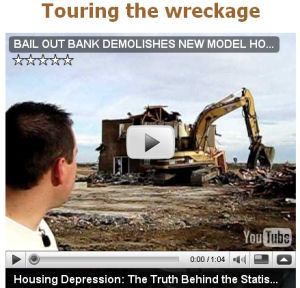 Now in Southern California, soon in place near you

The link http://www.brasschecktv.com/page/702.html provides two short videos that starkly illustrate the ultimate results of unsustainable growth, as it is unfolding right now in Southern California, and as it is likely to unravel anywhere that continues too far with an economy based predominantly upon land speculation, urban construction and retail.

Extensive areas riddled with debt and without productive function or options

This growth model produces extensive areas that are riddled with debt and have no genuinely productive function or options by which to repay that debt. The extremity of circumstance shown in these videos also presents a new, terribly real, but currently unreported wave of refugees - the repossessed homeless.

The same situation developing and compounding in Australia

It can happen anywhere in Australia, but I will talk about a situation near my area, Rainbow Beach in Queensland. A world heritage area, and the last small town on the coast, it has been subjected to waves of developer proposals and attempts to massage opinion now for several years.

Bringing the issue closer to home in Cooloola (an obsolete term since Council amalgamation but how else do you quickly describe the region around Gympie, Queensland, Australia), what will happen to the many local families whose debt makes up the rapidly escalating amount of unpaid Council rates? Just prior to the recent rate rise this figure was $3m, up after last year's rate rise from $1.8m only two years ago. The new rate rise of 15-25% plus levies, a 30% increase in electricity costs, fuel on the rise, etc. will all combine to make this situation even harder. Yet local jobs, and all plans to 'increase' them, are focussed on land development and the retail that spins off of it.

Councils have no business getting their constituents into debt

How is Council prepared to deal with these contingencies? It couldn't happen here? That's exactly what they thought in California only two years ago. Denying physical reality didn't help them avoid it. Fringe and regional suburban areas in Australia are structurally very similar to the depicted Californian situation.

The last thing Rainbow Beach (or any other small town) needs is to become a regional suburb. That is not development. In the light of current knowledge, it is socio-economic suicide.

The second last thing we need is for our Council to continue taking the region down this doomed urban development pathway to increasing debt, under-employment and overall infrastructure deficiency.

It's all a hard message to grapple with for some of us but we ignore it at our peril.