Senator Joyce should comment on the impact of landscape-scale bulldozing of native ground cover and natural land features during the construction of cotton farms and other broad-acre irrigation enterprises, when he calls for damming of the Balonne River in Queensland, in response to the St George floods. 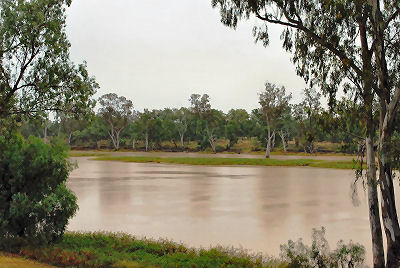 The continuing campaign, by Federal Opposition Senator Barnaby Joyce, to dam the Balonne River, ostensibly to mitigate the impact of flooding around St George, has been criticised by environmental and public water-rights advocacy group, Fair Water Use (Australia).

Coordinator of Fair Water Use, Ian Douglas, responded today, “If the Senator is genuine in his desire to reduce flooding, he should first call for the demolition of inappropriately sited and unregulated levees, constructed by irrigating agribusinesses in the Darling catchment, including one seven metres high which runs for many kilometres next to the Balonne on the cotton property of Cayman Islands-based Eastern Australia Agriculture, just downstream from St George.”

“We would also like Senator Joyce to comment on the impact of landscape-scale bulldozing of native ground cover and natural land features, during the construction of cotton farms and other broad-acre irrigation enterprises, which has effectively removed the natural barriers to surface-water flows in the upper Darling catchment, especially in the St George area”, he added.

When the Howard Government came to office, land clearing was accelerated in Queensland. As more and more landholders wanted to clear their properties before the feared regulation of clearing, permits were building up and creating backlogs in Department of National Resources offices across the state. Contractors used both the notorious bulldozer-and-chain clearing process and mass distribution of herbicide that poisoned native vegetation. This silencing of the bulldozers was the culmination of a 15 year campaign of public pressure, when the Queensland State Government passed laws to phase out broadscale land clearing in May 2004. The laws protect almost 20 million hectares of native bushland that would otherwise be open to land clearing. That's an area larger than the state of Victoria, and three times as big as all Queensland's National Parks combined. WWF-Australia commissioned a scientific analysis of the biodiversity impacts of clearing in Queensland in January 2003, which found that land clearing kills more than 100 million birds, mammals and reptiles each year in this state alone. Queensland had the highest rate of land clearing of any state in Australia. Between 1995 and 1997 the average rate of land-clearing across Queensland accelerated from 289,000 hectares a year to 340,000 hectares a year. However, cattle producers complained that this decision to ban the clearing of one million hectares of endangered regrowth vegetation in Queensland would cut jobs in city slaughter yards, for stockmen and in rural towns. It is still imagined that we can have a healthy economy without a healthy environment! Wonder if anyone on the Royal Commission will have the courage to connect the Queensland's floods with their massive land clearing and the permits for developments in flood-zoned areas?