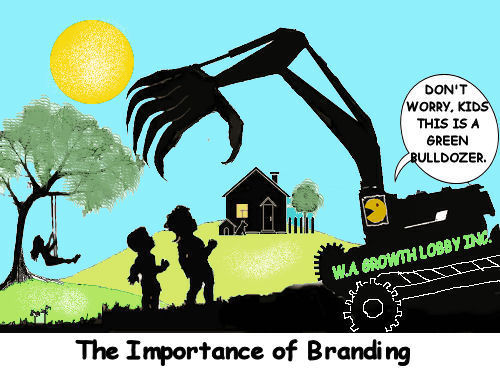 All of this makes it surprising that Senator Ludlum , when speaking in parliament[1] about the Transforming Perth Study (a joint study by the Property Council of Australia, the Office of Senator Scott Ludlam ) would state:

“ It has been an unexpected joy working with the Property Council and a cohort of developers that they brought in to keep our feet on the ground. My thanks go to William De Haer and to Joe Lenzo, the Executive Director of the Property Council of Australia, for their committed work in bringing this report to fruition...”

Although this plan, ‘Transforming Perth’, did include provisions for light rail, cycleways and green ways, and aimed to stop urban sprawl by utilizing existing infrastructure, it was still Urban Consolidation, a term that has become synonymous with ‘Sardine suburbs’ and is now replaced with a less confronting name –‘Smart Growth’. But when you consider that developer-related corruption in NSW recently saw 11 Liberal politicians resign or stood down in just 9 months, 8 councils sacked in 5 years , 19 corruption inquiries by ICAC that led to 14 prosecutions, then Senator Ludlum’s gushing endorsement of developers suggest he is at best naïve. He is also at odds with some of his Green colleagues, like David Shoebridge, who argued that:

During his speech Senator Ludlam went on to say:

“This new study was commissioned... to take a long, hard look at what has happened in Australian cities in the last 50 or 60 years... Perth does have a good public transport network, but it simply has not kept pace with the growth of the city...”

Well what happened in the last 50 or 60 years was that the population of Australia grew from 7.5 to 24 million. Perth now contains over 2 million with a growth rate that reached 2.5%, the fastest in the nation, adding 346,000 more people in the decade since 2001. This explains why the transport system was overwhelmed. NO major city in Australia has been able to keep up with the extra infrastructure demand created by explosive population growth. Advocating, or even accepting accelerated population growth as a norm is tantamount to endorsing the unsustainable growth economics of the major parties, whose policies create all the environmental mayhem that the Greens deplore. As an example the water flow into Perth's dams has slumped by 80% since 1970 and is predicted to decrease even more in the future. Desalination plants, re cycling and underground water supplies help but are energy intensive and cannot supply cheap water to manufacturing, let alone agriculture.

Preventing urban sprawl is of course essential because we cannot afford to lose our best agricultural land, native forests or open spaces to endless housing. But Perth's sprawl has now extended in a strip 240kms along the coast. This has occurred because people want to live near the beach, where it is cooler. Temperatures across the world are rising due to climate change but in cities they have climbed much faster due to the Urban Heat Island effect – the heat retention created by roads and buildings and loss of vegetation which is more prevalent in regions with higher density housing.

But the most alarming section of Senator Ludlam’s speech was the scale of the proposal:

”The Transforming Perth study identified more than 1,500 hectares of land along seven high-capacity transit corridors in Perth and showed that if you built medium density dwellings, .....along these corridors-of four or five storeys, you could potentially fit between 94,000 and 250,000 dwellings along these corridors...”

Using the lower figure of 94,000 dwellings that equates to about 200,000 to 300,000 people and will require employment for around 100,000 in a state with sharply declining opportunities. The term ‘Smart Growth’[2] was coined as a way of convincing sceptical residents that putting more people into their suburbs was the right way to go, that it would utilize existing infrastructure and cut transport problems. But it hasn't worked out like that because existing suburbs lack the infrastructure for such increases in population. There will not be enough schools[3] or hospitals, water, sewerage or power facilities. Furthermore their construction will be more expensive because of the higher land prices, because land prices increase in proportion to population density. Medium density housing is not, in fact more affordable because prices are a function of supply and demand. Nor is it a ‘green’ solution since it does not reduce the human footprint (currently estimated at 6.25ha./person in Australia). Instead, medium density adds to the Australian footprint since higher densities provide less opportunity to collect enough solar or water. They are unfriendly to vegetable gardens, they don’t permit outdoor clothes-drying and they are more reliant on air conditioning. New house construction also adds to Greenhouse emissions. A two bedroom house creates 80 tonnes of CO2 equivalent. Our economic dependency on housing has left us with high personal debt – totalling $1.8 trillion with one of the world’s highest debt to GDP ratios, setting Australia on a course of reduced personal wealth for the bulk of Australians and the prospect of ever rising greenhouse gas emissions.

On the plus side Senator Scott Ludlam received the Planning Champion Award for his collaborative work with the Property Council and AUDRC "Transforming Perth". It is a plan which will cater for population growth (of which more than half is government-engineered) for perhaps 10 years. After that, well perhaps we go to 10 stories? And after that…?

The true cost of urban sprawl – Why infill development is Perth’

The true cost of Perth’s urban sprawl has been highlighted in the recent #DesignPerth report, with the focus of Perth’s future cost savings and sustainability being placed on infill development. They admit that the cost of providing water, power, communication, and education to greenfield sites is $150,000 per lot! Even property developers are admitting their limits to costs. Now, they are promoting "infill", or filling in existing suburbs with more towers and density. “Population growth is not a bad thing if it is used to generate more sustainable cities. Every city needs to see its growth plan as an opportunity to create a better city – one that has a reduced footprint and a better livability”, the report states. Obviously they are concerned about how people are reaction to the massive growth in Perth, and the potential environmental destruction to native vegetation and wildlife habitats. If designed properly, denser environments provide more people with greater access to more variety and more amenity – more varied shopping, closer to work, easier access to the city with its entertainment and cultural provisions, and access to a greater variety of parks and recreational places,” the report states. The report concludes by substantiating the real savings of increasing Perth’s infill target in a manner that we can all understand, by increasing to 60% the WA Government would make savings worth $23 billion by 2050. Enough to pay for the entire Perth Light Rail network, as originally proposed, 12 times over or the Fiona Stanley hospital 9 times. Imagine the infrastructure that could be developed if urban sprawl was reduced. Nothing in the report suggested any limits to growth, but damage control. http://wapropertynews.ventura-id.com.au/true-cost-urban-sprawl-fill-deve... It's expected that jobs will keep rolling out, and that "migrants create jobs"! Just where is Australia's population growth heading, and what is the target to be achieve by never-ending growth, without a plan or a cap? It's just short-term-ism, and inflating the housing Ponzi scheme while it still generates profits. These vertical slums will be condemned by future generations, as they suffer lack of water, declining living standards and excessive heat.

The deceit of the claimed benefits of High Density living

Given the claim: " If designed properly, denser environments provide more people with greater access to more variety and more amenity – more varied shopping, closer to work, easier access to the city with its entertainment and cultural provisions, and access to a greater variety of parks and recreational places,” the report states." So our priorites are shopping and canned entertainment are they? We know the recreational places created today are tiny compared the vast parks set aside when Melbourne was established - precisely because the English immigrants came from the crowded, high density living that was "London" and despised it. The creation of the TV and Media room has allowed this 'density' to take hold in Australia - but take away these, and if everyone - out of boredom - was to go outside, the parks and entertainment venues would be utterly insufficient. So the whole premise of this growth relies on most people NOT taking advantage of 'local cultural provisions' (unless this meaning is restricted to cafes). High density might be ok if surrounded by gardens with rural escapes close by, but not the way we are experiencing it - miles and miles of concrete lined with inhumane gigantic coloured boxes in place of beautiful buildings - and the traffic! Who can go anywhere? - travel away from home today is probably harder for most than it was for villagers 300 years ago. At least back then they could walk to the local shops - now you have to drive. But that detracts from the point - what if what you desperately want is contact with nature? Modern cities are so artificial, in every aspect that a complete feeling of alientation from nature is certain. We are supposed to instead take pleasure from Hollywood films that have had the same plots now for 40 years, and this is considered an appropriate replacement for the beauty of nature, with its wild-life, trees, waterways etc - all things are being progressively destroyed to make our 'sustainable cities'. The insanity of it, and the increasingly blatant lies as the contradictions become more and more evident are now getting almost too much to bear!