Flying Scales - Story of a family of Ospreys

Very early on I made a decision that I wanted to understand a few birds rather than know a little about a lot. In my area, the three birds I loved were the Little Egrets, Spoonbills, and the Osprey. This focus stayed with me till the last photo taken. Any other photo of any other bird came about due to the fact they were in the area of these three birds.

I was blessed that we had eight nesting pairs of Ospreys within a 30 minute drive of where I lived, five different areas and environments, five natural nests and three nesting in placed poles. (They had cut down their trees for developments but we got the developers to put up poles, best outcome.) 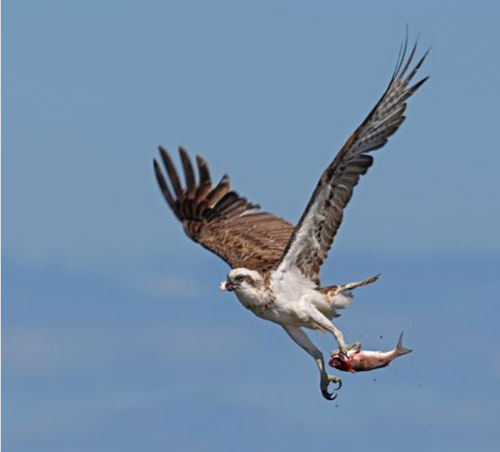 So I had a great choice of subjects. I had my favorite pair I called Mr & Mrs Smith. Natural nest in a massive dead tree. Once belonged to a pair of Sea Eagles but someone shot them with a cross bow 15 years ago and the Ospreys took it over. He would eat some times on the Fly, as he ran the gauntlet of all the other birds that wanted his fish. In the picture, you can see the scales flying of and it looks like part of the fish gill stuck in his beak.

It was beside a gravel road 80 meters from the river, had the easiest access of all the nests, good and a bad thing, but the couple of locals who lived near by loved them and if any one came down their dead-end road they knew. In the end we put up a letter box, we asked the shire to consider renaming the Road to Osprey Road and they did. We turned them into a asset, I suppose, but they so helped to build awareness and brought thousands of people to see and want to help, not what you really want but it did bring a community together. School kids came to watch them, wrote 'em letters.

This [picture] is Mr Smith. He was a great hunter: Eight fish a day. During fledging, and for three years, I was able to be around them and capture their life. I did this with little Dave and Deb and Sam Spoonbill and his missus. Spend an hour here, hour each with the others, mix the days - sometimes you spent a whole day because things were happening. It was an amazing time, one I truly miss.

One day during year three, Mr Smith did not come back. I searched for days, found him drowned downriver. He had a mullet that was four times bigger than the normal ones he caught, and he could not lift it out of the water. Was like losing a best mate. I was buggered, just cried for days.

Three days later, I was on the freeway going to Perth. Their nest was a mile north, and Mrs Smith was on the left rail, just sitting there. Never seen them on the rails of the freeway bridge before. On the way back I found her flat on the road. I stopped and picked her up and went and buried her with Mr Smith. She had kicked the chicks out of the nest - she could not leave them to get tucker as they were too small - and they were at the bottom of the tree. Buried them with mum and dad. After that day I was buggered for a month, never went back to the tree 'til a year ago. Couple years later a big storm knocked the top of the tree off and the nest came down. Apart from stories, my and anyone else's images, no-one would know of their existence. These two birds that changed and affected so many lives would be a bit like, “Did the tree make a noise when it fell down in the forest? Only if someone was there to hear it."

So every photo we take is a record of what is, was, and was once. We have no idea how important they might be one day. Every photo is unique, an individual and a totally different perspective of a split second in time. Each and everyone of us is a keeper of that moment, looking at it like that. Just makes it a whole different ball game. We are the keepers of history!! Well that’s how I see it.