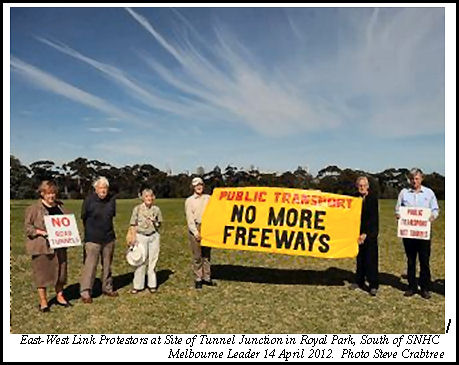 Royal Park Protection Group Inc. (RPPG) members would have experienced a sense of déjà vu on 18 May 2012 when Premier Ted Baillieu launched a “review” of the East West Link (EW Link.) In a hard hat (a requisite for politicians in front of cameras) he started up a huge mechanical drill beside the Eastern Freeway not far from Hoddle Street in Clifton Hill, purportedly to obtain earth samples from the area designated as the start of the EW Link Tunnel.

The Premier appears unaware that the State Government has conducted two reviews of the EW Link, namely, the 2003 Northern Central City Corridor Study and the 2008 Eddington Review which found that most traffic is travelling north-south, not east-west. For the past 13 years RPPG has been ever vigilant over the likely destructive impact of a tunnel tollway/ freeway through Royal Park and inner suburbs. On 26 July 1999 Dr Paul Mees, then President of the Public Transport Users’ Association (PTUA), spoke at RPPG’s AGM on the topic “Implications for the inner city of a Royal Park Freeway Link”. Since then under the regimes of Jeff Kennett (Liberal) then Bracks and Brumby (Labor) we have fought extension of the Eastern Freeway, now known as the “EW Link”.

On 18 May when Ted Baillieu flicked the switch on the EW Link, Adam Bandt, Federal Member for Melbourne, called a protest mobilising more than 50 people within 2 hours “to send a clear message that Melbourne residents want more trains and trams over dirty private roads to keep Melbourne liveable.“ The snap protest got coverage on all major news channels and on 774 Drive and 3AW Radio. Rod Quantock (RPPG Deputy Convenor) and Julianne Bell (Committee member) attended and spoke on Channel 10. RPPG is campaigning together with allied groups - Protectors of Public Lands Victoria Inc. (PPL VIC); Yarra Campaign for Action on Transport (YCAT); and the PTUA not only to oppose the EW Link but to support the Doncaster Rail Link (but down the Eastern Freeway not through Balwyn and Kew.) (See YCAT and RPPG websites at http://www.ycat.org.au and www.royalparkprotect.org.au )

On Saturday morning last the Hon. Terry Mulder MLA, Minister for Public Transport and Roads, was interviewed on 3AW about the EW Link. While this and rail projects were discussed at length, no mention was made of the Doncaster Rail Link. Hence it seems that the EW Link will get priority.

In March/April last consultations were arranged by a “community engagement consultant” hired by the Department of Health and orchestrated by the City of Melbourne who said they were going to ask people “what they wanted” on the 3 hectares of land on the corner of Gatehouse Street and Flemington Road. RPPG and other community organisations recommended for this land being reclaimed under the old RCH buildings an extension of open woodland of Royal Park and plantings, as specified in the Royal Park Master Plan in keeping with indigenous bushland. We said that account must be taken of the location – surrounded by gridlocked traffic - therefore the dense treed barrier in Gatehouse Street must be continued along the street frontages. The question of what people “want” (suggestions given included a maze and sports facilities) appears irrelevant as under the Royal Children’s Hospital (Land) Act 2007 this land, which is to be declared “surplus project land”, will be reserved by an order of the Governor in Council “as a public park to form part of Royal Park.”

PPL VIC and RPPG representatives met Health Minister David Davis on 30 March 2012 to raise our concerns about the above issue plus Stage 2 of the RCH redevelopment including: construction of the hotel; the second car park extension under Royal Park; the operation of the helipad; and the disposal of the mountain of spoil left in Royal Park after excavation for the first car park. In addition it was pointed out to the Minister that there was no community representative on the RCH “Reference Group”. We thank him for appointing our nominee, Kevin Chamberlin, President of the North & West Melbourne Association and past President of PPL VIC, to represent the community on the Reference Group.

Most RPPG members will know that the Lord Mayor has, most ill advisedly in our view, attempted to fast track installation of a toilet block at the entrance to the Australian Native Garden in Royal Park. In addition to threatening the environment – 5 heritage pepper (peppercorn) trees and mature eucalypts - and being extraordinarily obtrusive (a huge 3 cubicle stainless steel model), this public convenience dubbed “Doyle’s Dunny” is to be constructed in an unsafe location as it is on a mulched garden bed; directly under the massive upper branches of a 100+ year old pepper tree; on the edge of a bike path; and directly in line with the driveway out of the Gardens. In addition, it is regarded as unwise to locate a toilet in an obscured glade of trees as it is an open invitation for “anti social behaviour”.

See http://melbourne-leader.whereilive.com.au/news/story/toilets-create-bit-of-a-royal-park-stink/
We thank members for the on-line comments on this article (still on display) and for your support over this important issue for Royal Park. We will keep you posted as we are still corresponding with Council!

Snap Protest - Say No to East West Link - Yes To Doncaster Rail Link Tuesday 21 August 12:30 pm Outside Dan O'Connell Hotel Carlton Protectors of Public Landands Victoria Inc. and Carlton Residents' Association are inviting you to our snap protest - Say No to East West Link Yes To Doncaster Rail Link next week. As you would know Stage One of construction of the East West Link has commenced with "geological investigation" (ie drilling for soil and rock samples and testing for underground water) along the proposed alignment of the above/under/on ground road way. Note from comments made by the State Government that the tollway/freeway it is highly likely to be an above ground "aerial roadway" akin to CitiLink along Princes Street and through the inner suburbs with compulsory acquisition of property along the route. It is likely to be open cut through Royal Park. Please support us at this crucial stage of our campaign. The drilling rig will be installed on the reserve outside the Dan O'Connell Hotel Carlton, north east of the Canning St/Neill St intersection, Carlton. The reserve is right on Princes Street behind the wall. (The reference for this drilling site is EWL-B12-007 on the map from Linking Melbourne Authority. Please advse if you could like a copy of the map sent on email) Time: 12:15 pm for 12: 30 pm start Date: Tuesday 21 August 2012 Reason: Continue protest over East West Link and demand the Doncaster Rail Link. Speakers: Councillors and community representatives Bring: Green triangles with No Tunnel message or Trains not Tunnel placards or Public Transport Not Road Tunnels placards/banners. Location: Near the drilling rig see above location. Transport: Car parking in Neill Street. Trams in Nicholson Street and Lygon Street. Bus in Rathdowne Street. Walk down or up Princes Street to the Dan O'Connell Hotel. Contact: Julianne Bell Protectors of Public Lands Victoria Inc. Mobile: 0408022408 [email protected] or Ian Bird Carlton Residents' Association [email protected] Phone: 93471411 Please circulate to your groups urgently.

Something you should know about the euro crisis

The euro crisis is not something what is caused by some countries or people.
It's an general issue about how money is working.

Bitcoins are limited and every day more people know about them, the value is raising since months and will raise much more.

All problems in the world where caused because of the money system.

Sorry for spamming but this is important.

If you like it anyway you could also think about donating some Bitcoins.
Bitcoin Address: 1PHvSMNeh7XzqauYUyHyUEWGz63ich1XkB