How much further can developer-debts drag us down?

Role of debt in a fool's paradise

The world graph shows Australian private debt to be proportionately higher than that in the US, Financial sector debt to be significant and Govt debt to be relatively small. Why then is so-called excessive Government debt ALL we ever hear about from the media and the growls emanating from the political bear-pit? Are they just stupid or are they trying to hide or completely deny something?

Also of morbid interest is that the UK is an economic meltdown waiting to happen. Financial debt is running at 1000% of GDP. How can that astronomical amount possibly be bailed out when it implodes? Greece and Spain are flecks of dust compared to that one.

These give a snapshot of the extremity of the national and global debt situation. Very evidently it is the biggest elephant in the global lounge-room at the moment and will only get stinkier and more broadly destructive the longer that its overwhelming presence is ignored. 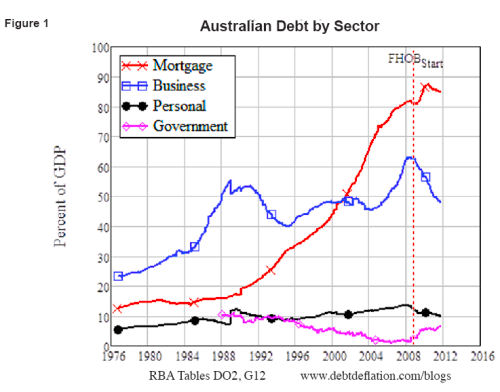 Australian debt related to housing represents a huge part of the costs of doing business and of living. The opposition has a lot to say about the cost of a carbon tax, but that cost would be imperceptible if governments and the growth lobby stopped pushing up land and housing costs by importing whole towns worth of people into this country.

We are looking at long-term loss of spending capacity

There is a pressing need for governance to recognise the game-changing transition that is now irreversibly underway so that the best outcomes can be drawn within the very unfamiliar and difficult economic rules of this new game. We have now moved from a long build-up period of enormous credit spending and debt accumulation into a long period of debt de-leveraging and consequent loss of spending capacity. The loss will hit Individuals and thus the retail economy, and hit all levels of government and thus the entire public spending program. Public debt and Government financial capacity will be hit even harder if governments continue to bail-out wealthy financial institutions for their speculative losses.

Unfortunately a number of reasons make such bail-outs likely to occur, and particularly so if the ordinary person remains unaware of the nature of this big structural change that is underway. Its impacts will reach deeply across our entire socio-economic framework. It effectively destroys the growth model that has been employed since World War Two.

Local councillors need to educate themselves beyond State ideological feed

Local Councillors need to become aware of this so that they can pull back from a futile reliance upon property development and associated tourism to drive Shire economy. I know most do not have the mental faculty or will to do so, however some might if the material is presented in the right way. This need is especially urgent in the context of the impending construction a new Strategic Town Plan.

Greg Wood is a leader in the fight to stop inappropriate development at Rainbow Beach Queensland in a World Heritage area.http://www.inskip.org/index.html

Greedy few gain from reduction of our overall wealth

Where is Australia not able to produce wealth because of a shortage of
workers (apart from the mining 'industry' which does nothing more than
remove from the ground our finite non-renewable legacy of fossil fuels and
metals which rightly belongs to this and all future generations)?

What little of the Australian economy produces real wealth that can
actually be traded for real imported wealth--agriculture and our minuscule
manufacturing industry--has already more than sufficient human resources within
this country.

Adding to our population at best can only increases the number of
people amongst whom this continent's finite quantity of wealth must be shared
thereby making each of us on average, poorer.

On top of that increasing the population adds to dis-economies of scale caused
principally by abysmally planned urban expansion, most likely done for the
benefit of the motor industry, and tollway builders amongst others, as well as
land developers. As a consequence many people live far from their workplaces,
education, shopping and entertainment and recreation facilities and other
amenities and are forced to drive long distances each day with resultant
gridlock during peak hours.

The Banks are the primary predators in the 'growth economy'. They're just not so materially visible in their action as the barracuda developer's and such that so publicly thrash and tear, shrouding the financiers with their crudity. Everything that is created out of debt, the bankers own. That's why they encourage the escalation of debt-financed asset speculation. However the process can go too far, as it has now. Nothing can maintain an exponential growth rate, not even imaginary credit.

Southbank, Melbourne, is 50% owned by foreigners living in places like Hong Kong, KL, Singapore and Jakarta because that is where the developers run big selling sessions. So the Australians who buy and live in these apartments are very angry because the Melbourne City Council want to bring in good rules about heights and separations but this so called expert Panel will not agree and want the sky to be the limit and as close as you like – well it is called discretionary, which as we know is meaningless.

Where, for instance, the people and the council want 20 metres between buildings, recently the Minister approved a building only 10 metres from its neighbour. Pretty tough on both sides of the divide – high in the sky and all you look out at is into someone else's living room.
Disgusting!

"Planning" is synonymous with growth and deregulation

There's no Planning as such in Melbourne any more. It's become synonymous for growth, and liberalizing building and construction standards. The fox is in charge of the chickens - those with vested interests in growth and the property market are setting the rules, and standards on height, and the extension of our urban growth boundary. It's all downhill, and Victoria's economy is at a standstill from all the financial demands of growth.

These high rises cast long shadows, are imposing, windy tunnels and are not family friendly. How can children live in them? The residents ultimately will be forced to add to urban sprawl if they decide to have families.

These towers are about warehousing people as consumers, as economic units, to add to our customer base and GDP, not about planning human-centric living standards for Melbourne.

The carbon tax will exacerbate the high costs of power, water is becoming a luxury item, Councils keep increasing rates to keep abreast with their services, rubbish disposal costs a premium, traffic congestion drives the need for more freeways, and jobs are going offshore.

The obvious end result is that Melbourne ends up family-hostile, with more and more homelessness and crime, and closer to a divided community of haves and have-nots - like a third world city.