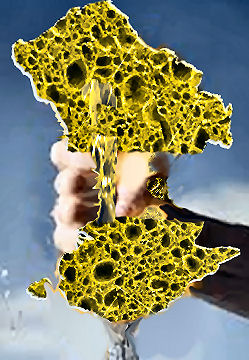 While the Murray-Darling Basin Authority apparently struggles to find even a paltry 3,000 gigalitres of water in its increasingly compromised attempt to restore the nation’s most vital and productive river system, a new report[1] reveals Australia to be the world’s largest net exporter of virtual water. This water is exported in crop, livestock and industrial products. It is the water consumed to create produce for export.

Independent data cited in the Canadian paper. It does not pertain to the time of the Australian drought.

The report also indicates that our agricultural sector is responsible for the vast majority of the total volume of water exported from Australia in this way, shipping an average of 72,000 gigalitres of virtual water overseas every year.

“While few would question the important contribution made by most Australian farmers, it defies belief that a country continually struggling with unreliable rainfall and severe drought allows more virtual water to be lost than any other nation on the planet”, national coordinator of Fair Water Use, Ian Douglas, commented today.

He added, “This sad fact is made even more poignant when one considers that the Murray-Darling Basin Authority seems incapable of finding a mere 7,600 gigalitres of environmental water to ensure the health of our most important river system”.

“These statistics also confirm the arrant irresponsibility of applying Murray-Darling water to semi-desert country, irrigating water-intensive crops such as cotton - a product which largely heads offshore, together with the vast amount of virtual water it contains”, he concluded.

1. The report (PDF, 1.8MB) may be downloaded from the Fair Water Use web site.

Full media release and report may be viewed at: http://www.fairwateruse.com.au/content/view/317/48/, Fair Water Use Australia, 'striving for a revived Murray-Darling basin by supporting environmentally sustainable water-use'.

1. The report Leaky Exports: A portrait of the virtual water trade in Canada (PDF, 1.8MB) may be downloaded from the Fair Water Use web site.

I find this very hard to believe. Who is allowing Australia to ship so much water? More than any other nation? There's just no way. My dad was there a few years ago and he could hardly find words for the seriousness of the drought they've been having. Who is collecting all the shipped water? Surely someone needs to be fired.

Editorial comment: 1 litre of water can be very closely approximated to 1000 cm3 = 1 x 10-12 km3. This means that the 72,998 Gigalitres that Australia is exporting each year can be thought of as 73 cubic kilometres of water, figure that is almost too huge to imagine.

As stated in the paper, the definition of virtual water is somewhat variable:

“In 2003, A.Y. Hoekstra (a scientist at the University of Twente in the Netherlands) expanded the definition of virtual water as being to denote the water used in the production process of an agricultural or industrial product, “including the water applied in the use and waste stages of the product.”. He used this definition to calculate the Virtual Water Content (VWC) of various agricultural commodities and later did an extensive estimation of the Virtual Water transfers between nations.”

Although a proportion (as yet undefined) of virtual water will certainly return to the hydrologic cycle, the water consumed in the creation of produce for export in any given year is effectively lost to other uses, including environmental flows and production for the domestic market.

Australia has an embarrassing oversupply of water

Subject was: Virtual Water Supply Virtual : Existing in the mind, specially a product of the imagination. (thefreedictionary.com) While the usage of Murray-Darling River water for various agricultural purposes is certainly contentious and debatable and all affected or concerned are unlikely to ever agree on the answers to the problems it seems to me that this report has very little relevence to the debate. Australia has an embarrassing oversupply of water as many Queenslanders have found this year, it just seems to be in the wrong places at the wrong times. My use of 8,000 virtual litres to buy a pair of leather shoes or 2,400 virtual litres to eat a hamburger or the export of cattle (or minerals or most other products) to China is hardly going to affect anything that this Fair Water Use mob is concerned about. So - The problem is? And - The answer is? On the scale of things I need to apply my mind to this is certainly well down the list and well below the problem of my virtual sex life. If the only answer to a problem is that we need to go back to living in caves, count me out of being part of the solution.

Forget the "virtual sex life" - try some memory stimulants! In Australia, the world's driest inhabited continent, drought punctuates the climate record with disheartening regularity. We are a nation of droughts and flooding rains! Some droughts last for a long time, while other droughts can be short, but cause lots of damage. Here are some other major droughts that have affected Australia: * 1864 to 1866 – this drought affected all States in Australia, except Tasmania. * 1880 to 1886 – the southern States of Australia were affected, especially along the east of the country. * 1895 to 1903 – this was one of the most severe droughts in Australia. It caused the death of almost half of all sheep and cattle in the country. * 1911 to 1916 – 19 million sheep and 2 million cattle died from lack of water. * 1918 to 1920 – only parts of Western Australia were not affected by drought. * 1939 to 1945 – nearly 30 million sheep died during this six year drought. * 1963 to 1968 – this drought destroyed almost half of Australia’s wheat crop and 20 million sheep. * 1982 to 1983 – this was an intense drought that affected many areas of Australia. * 1991 to 1995 – a long-term drought that affected rural producers and cost about $5 billion to Australia. The last drought, or "big Dry", started in 2003 and has only recently broken with flooding. We need to be reminded at times that we depend on Nature's bounty, and should not assume it, or destroy the ecological basis for our survival and well-being.

Dear friends We need to talk about water! With a growing population and increasing demand, there is growing competition for an increasingly scarce resource and ever more pressure on our rivers and aquifers. What can we do? You’re invited to come and join the conversation at Environment Victoria’s Frankston hub, for an evening with me and Yarra Riverkeeper Andrew Kelly. We’ll be exploring ideas, potential solutions and upcoming opportunities to get involved and have your say. What: Water@theHub, a conversation about our water future When: 6.00-7.30 pm. Thursday 23 August, nibbles provided Where: Environment Victoria Frankston hub, 130 Young Street, Frankston With: Environment Victoria Healthy Rivers campaigner Juliet Le Feuvre and Yarra Riverkeeper Andrew Kelly I know these issues are important to you because you came to our last Frankston water workshop 18 months ago. Now it’s time to dig deeper and start the hard conversations about what we really need to do. Please pass this invitation on to others who you think may be interested, and RSVP to me to let me know if you can come. Hope to see you all at the Hub next week! Regards Juliet Juliet Le Feuvre Healthy Rivers Campaign Manager Environment Victoria Work days: Monday and Tuesday. DIRECT: (03) 9341 8106 MOBILE: 0428 770 019 RECEPTION: (03) 9341 8100