Who's afraid of Julia Gillard? The Growth Lobby, that's who. 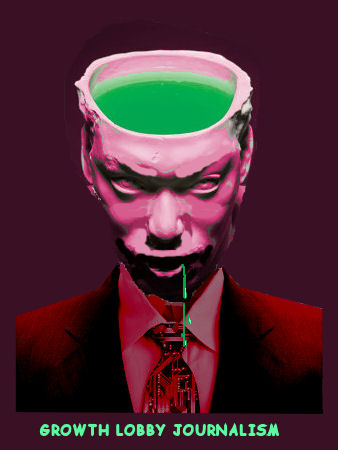 The Australian Growth Lobby has only a couple of primitive weapons - calling the PM a racist and misrepresenting the figures. The other side has all the good arguments, as well as truth on its side. This article analyses the childish statistical misrepresentation and social innuendo in the Australian Financial Review editorial, "PM's own goal on population," 5 July 2010, p.54.

Who's afraid of Julia Gillard?

Fears about what Gillard's population policy statements mean are coming from the commercial growth lobby and, to a lesser extent, from the NGO sustainable population lobby. The first fears that Gillard is serious about not wanting a big Australia and beyond their control. The second fears that Gillard, too, will let democracy down and fall in line with the depraved agenda of the growth lobbyists, like so many Australian prime ministers. Using the commercial media, the Growth Lobby has prevailed over this country since Captain Cook brought over the first political prisoners, known then as convicts, later as colonists, never really as citizens with rights.

The apparent fear in the hearts (do they have them?) ... well, minds ... what about small, reptilian brains? (Oh, dang it, that's disrespectful to snakes)... of the growth lobbyists is therefore encouraging, because unless they are playing a truly elaborate farce, they really are worried that they have lost control of the P.M.

They only have a couple of primitive weapons to do this with - calling the PM a racist and misrepresenting the immigration and economic figures. All the good arguments are on their opponents' side. However the Growth Lobby does control the mainstream media still.

"PM's own goal on population" (Australian Financial Review, Editorial, p. 5 July 2010, p. 54) misrepresents the immigration figures by presenting them as percentiles of population growth. By stretching an average over 40 years between 1971 and a projected 2011 they manage to get a figure of 0.6% risk of being an immigrant per 100 people in Australia. What they don't say is that that percentage steadily declined over that time because the actual numbers of immigrants stayed the same at around 80,000 per annum. What changed was the total population numbers, as immigration and natural increase added to them.

The Australian Bureau of Statistics (ABS), which really is where the expert demographers are, doesn't talk in terms of immigration as a percentage of the total population because it is actually far more usual and more relevant to say what per cent of the total annual increase immigration represents.

This more usual measurement of immigration, however, wouldn't help The Australian's anonymous writer to fudge the facts.

In fact, in 2007 the ABS sent out media releases to tell Australians that the population had just increased by the most people ever and that net immigration had contributed 54% of that increase. This was the first time that immigrants minus emigrants had outnumbered births minus deaths in Australia.

"Australia recorded its largest annual population increase ever, according to figures released today by the Australian Bureau of Statistics.
Australia grew by an estimated 307,100 people for the year ended March 2007, the largest increase since record keeping began in 1789. The increase gave Australia an annual growth rate of 1.5% (the highest rate since 1990), and brings the population to an estimated 20.9 million.

Queensland again recorded the highest growth rate of all the states and territories, at 2.3%, followed by Western Australia at 2.2%, the Northern Territory 2%, Victoria and the Australian Capital Territory 1.5 %, South Australia and New South Wales 1% and Tasmania 0.6%. "

On 30 June 2010, the ABS put out another headline, which said that immigration was now contributing to two thirds of the annual population increase!

There were 22.2 million people resident in Australia in December 2009, with 432,600 people added in the year to December 2009. Despite recent increases in the fertility rate, nearly two-thirds of the gain was from net overseas migration. In the year to June 2008, there was a doubling in the net gain of people on student visas (to 109,000). ABS projections show, depending on assumptions about migration and fertility, that Australia's population may be between 34 and 40 million in 2051."

The editorial in the Australian Financial Review also describes the intakes as if they had occurred accidentally or naturally, when in fact the growth lobby organs played a role in forcing those figures up.

Growth Lobby scapegoats PM to avoid its own responsibility

But the Growth Lobby doesn't want to be identified with its actions, let alone take responsibility for them. It would rather imply that the Prime Minister - an immigrant - is a racist or an immigrant turn-coat, in as contrived a manner as it has used in its 'explanation' of immigration statistics.

See what you make of this concluding statement in the anonymous editorial:

"Ms Gillard is Australia's first foreign-born prime minister since Billy Hughes. It will be a sad irony if the first word of her premiership becomes the final word of historians on her time in office: the leader who diverted the country from a future open to the ideas, creativity and effort of tomorrow's equivalents of her own parents, into a cul de sac of stagnation, insularity and rapid ageing."

Rather than a 'sad irony', many Australians would see Gillard's attitude as comforting in its loyalty to her new country and a sign of courage. Courage in the face of a low kind of blackmail which has seen fainter-hearted immigrants shut up about the dangers of over population simply because they are afraid of being accused of shutting the door behind them. Such immigrants are a liability in a time when the growth lobby has forced us to pay through the nose for desalination plants, when the supply of cheap oil upon which the unprecedented population numbers of the 20th and 21st century rely upon, is dwindling, and food and water are looming as scarcities.

These costs of population growth are never weighed up against the paltry gains of those who directly invest in it, in the narrow and false economic arguments which are the final weak links in the Growth Lobby's chain that binds us.

Just to complicate things, that meant that the population growth rate was slowing. Because the population was so much bigger, however, the smaller rate of increase still represented a much greater number of people.

If net migration added 54% to the growth, they would also contributed at least this amount, probably much more, to the "natural" birth rate. Some migrant groups believe in having big families. Thailand has successfully limited their population growth rate through advertising condoms, with good humour. Improved education, especially of women, and the distribution of free condoms has meant that over the past generation Thailand has significantly reduced its birth-rate. Two decades ago Thailand had the same population as the Philippines; today there are 60 million Thais and 90 million Filipinos. Thailand's long-term economic growth has been remarkable. This progress has been reflected in the very significant improvement in indicators of well-being, such as life expectancy, infant and maternal mortality, and literacy. Poverty incidence has declined dramatically. The Government has been taking a people-oriented policy approach and gradually moving the country toward a social welfare-oriented system and forward as a single economy.

There is a lot of focus on the "border security" issues surrounding asylum seekers. However, most are found to be genuine. We are under obligation to take our fair share of refugees. However, all this media focus is distracting us from the real source of population growth and community stress - legal economic immigration! We have the highest level of population growth in the developed world, at third-world rate. This has meant that we are under pressure financially to keep developing the infrastucture needed, and our public services are always suffering "shortages", and we must pay more for the basics of life. Over 50% of our population increases are from immigration, and also our "natural" growth rate. With public housing in shortfall, and excessive rents and mortgages, how would we accommodate these refugees without compromising public housing - with citizens already on long waiting lists? First, Julia Gillard must address Kevin Rudd's bungled "big Australia" policy, and then we would easily be able to address our refugee intake.