The Australian Government has decided not to support a global ban on the trade of the northern variety of the bluefin tuna.

With northern bluefin populations falling dramatically, a proposal by Monaco to prohibit sale under the Convention on International Trade in Endangered Species has won US support, but not Australia's.

The Atlantic, or northern bluefin tuna has lost 72 per cent to 82 per cent of its original stock is under pressure also from illegal or unregulated fishing for the sashimi trade. 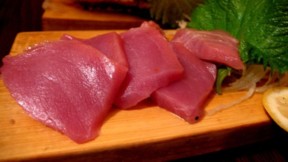 Japanese, Korean, Indonesian and Taiwanese Bluefin tuna fleets use long line fishing which results in the incidental deaths of thousands of seabirds, particularly petrels and albatross.

However, the Australian Government has decided not to support a global ban on the trade of the northern variety of the bluefin tuna. Instead, the Environment Minister, Peter Garrett, has decided to support stronger trade control measures and fisheries management.

Japan, the biggest consumer of the fish, has indicated it may not honour the ban on northern blue fin tuna.  Japan says that bluefin is not facing extinction, but acknowledges that recent rates of exploitation are probably not sustainable.  Sushi is a popular dish in Japan, where fatty bluefin – called o-toro – sells for as much as 2,000 yen (£13) apiece in high-end Tokyo restaurants.  The solution, they insist, is stricter management of fisheries, which have consistently exceeded their own quotas.  They feel their "culture is under threat" - a culture of poaching, bullying and powerful lobbying!

The trade ban would allow individual countries to continue to catch atlantic bluefin tuna for domestic consumption.   Imports from the East Atlantic and Mediterranean, which could be completely shut down by the threatened ban, would reduce Japan's sources of bluefin tuna by about 20 per cent. 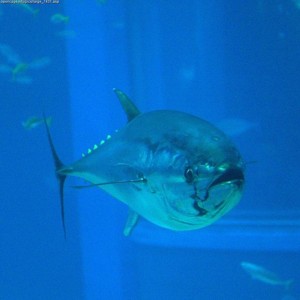 The northern bluefin fishery has a poor record of compliance with control measures, and Japan  consumes  up to 80% of the world's tuna.  Japan holds the line on whaling and they are also sending a signal that limits on bluefin tuna aren't up for debate either.

The Southern Bluefin Tuna is one of the sea's most impressive creatures. A beautiful and powerful fish, it is well suited to a long life endlessly swimming the open seas.  An adult Bluefin grows to around 200 kg and over 200 cm long. Its close relative, the Northern Bluefin Tuna, Thunnus thynnus, can grow to a massive 700 kg.

Glenn Slant, global marine program leader for TRAFFIC, a program of WWF, put the situation more bluntly last year: The southern bluefin tuna is at an all-time low, below 10 per cent of its original population size, and what that means is at any time it could collapse.

The Australian Government continues to sanction fishing of southern bluefin tuna and perhaps is making this decision to block the protection of northern bluefin because it fears embarrassment that we continue to allow fishing of a critically endangered species in our own neighbouring waters.

Every indication is that the Bluefin Tuna population is crashing toward extinction, said Felicity Wade from The Wilderness Society last October. While it is heartening to see governments finally acting on its plight, the 20% international cut is inadequate for the crisis the blue fin tuna is facing. Australia had the largest quota reduction .

If we were serious about bringing this fish back from the brink, concluded Ms Wade, the fishery would be completely closed while populations recovered.

Sea Shepherd plans to oppose illegal bluefin tuna fishing in the Mediterranean region and will employ the same hard-line tactics it uses against Japanese whalers in the Antarctic waters, Paul Watson said.

The decision by Peter Garrett, and Japan, makes mockery of "fisheries management" and principles of "sustainability".

Japan overruled, why can't they farm tuna like they do salmon?

THE UN body overseeing commerce in endangered wildlife today rejected a proposal to outlaw international trade in eastern Atlantic and Mediterranean bluefin tuna. European Union nations, whose fleets are most responsible for the overfishing of the bluefin, abstained from voting on the Monaco proposal. Japan's traditional dish, sushi , is under threat. Japan, Canada and many poorer nations feared a ban would devastate fishing economies. Only the United States, Norway and Kenya supported the proposal outright. Surely, it is the lack of breeding stock that will ultimately devastate the economies of poorer nations, not the lack of trade! It is assumed that marine resources will just conveniently restock, magically, to fit in with the human-created economic agenda and the cultural preferences of taste buds.

The Japanese to claim sushi is not under threat is akin to saying the sky will fall in. When they get home the Japanese must really laugh at the bullcrap that western countries and organisations believe.

Successive reductions in annual fishing quotas in Australia waters "prompted a move away from canning to value adding through farming. The first experimental farm was established at Port Lincoln in 1991 under a tripartite agreement between the Australian Tuna Boat Owners' Association of Australia, the Japanese Overseas Fisheries Cooperation Foundation, and the South Australian Government. Over the past decade the farmed sector has grown to the point where around 98 per cent of the Australian southern bluefin tuna quota is now farmed.

Farming is undertaken by those operators who have access to part of the Australian quota and who possess the necessary farm lease sites, and the equipment and expertise to catch tuna. There are currently fifteen tuna farms on eighteen sites, which range in size from 20 to 30 hectares.

New areas off Port Lincoln have been opened up from 2003 when there is expected to be twelve farmers operating on twenty-five lease sites."

So all that froth and bubble by Japan at CITES is akin to loggers claiming only 500 year of Eucalytus regnans provide quality woodchips for toilet paper.

Japanese spin is palpable. The 'scientific whaling' crap is more of a con than the Year 2000 bug. The sad thing is that the CITES mob believe them.

Unfortunately bluefin tuna farming belongs in the same utopia as kangaroo farming, it just doesn't exist. It is very misleading of the tuna industry in Australia to use the word "farming" as every single individual actually comes from the wild, they are just fattened up in large pens until they are big enough for slaughter.

Isn't bluefin farming renewable and exclusive from the wild?

The bluefin that are farmed are all taken from the wild usually as juveniles, this applies for southern and northern bluefin. Southern bluefin juveniles are captured between the north west coast of western Australia and Indonesia, the only known spawning ground for the species. They are then transported in submerged cages to the various "farms" or ranches in Australia where they are fattened up for the market. Debate continues about their status but many believe they should be listed as threatened due to the collapse in their numbers. All bluefin, northern or southern that ends up in the marketplace has been taken from the wild.

Scott, Thanks for claifying. From what you explain, it sounds like bluefin 'farming' is in reality a form of disguised poaching. If so this is a public fraud. Salmon farming is contained farming of renewable salmon on a site remote from the wild salmon. So in this sense, this form of fish farming is publicly acknowledged as completely separate to wild salmon fishing. But if as you state, bluefin farming is dependent on wild fishing, then this represents gross misrepresentation and must be exposed and stopped. What organisation adopts the role of independent public watchdog? Cheers, Tiger Quoll Snowy River 3885 Australia

It seems as though the southern bluefin industry is always on the verge of a breakthrough when it comes to successful captive breeding programmes but alas, they always end up dying. In the meantime though, the image of "farming" SBT is maintained and the protected industry continues to be Australia's biggest seafood export. Little wonder then, that in 2005 the the minister for the environment and heritage, senator Ian Campbell refused to include the SBT under the Environment Protection and Biodiversity Conservation Act. Campbell made this decision despite the Threatened Species Scientific Committee recommending the SBT be listed as endangered..... you wonder why these scientists bother sometimes. A government report from 2008 released with little fanfare (pg 314 onwards) gives a history of the SBT fishing industry. Sobering stuff.

Peter Garrett is considering a marine park for our Eastern coast

Peter Garrett is actually considering a policy FOR the environment, but what happens? There are those with commercial interests who don't want it! Mr Garrett yesterday announced he would "consider" more than 2.4 million square kilometres of ocean, spanning most of Australia's east coast, for marine protection zones. It would spread from Torres Strait to southern NSW. Following consultation with recreational and commercial fishers, conservation groups, scientists and traditional owners, the government will release a draft marine plan early next year. Once our population grows, so do commercial interests and the demands for jobs and economic benefits. Our natural assets will be more under threat as resources for industries. "Sustainability" can easily just be pushed aside as immediate demands become more prolific, and loggers, energy markets, the fishing industry, land clearing will be the threats that inundate our government Ministers.