Melbourne supporters will be holding their weekly vigil for Julian Assange this Friday at 6:30pm outside Flinders Street Station. It is vital for every Australian, who values free speech and opposes the unlawful detention and torture of Julian Assange by the U.K. government at the behest of its U.S. master, to demand that our government act now to free Julian Assange. For more information, see @LorineBrice, @Melbourne4Wiki.

Be there: 7:30pm, this Friday, at Flinders Street Railway Station. Listen to speeches and help us hand out leaflets.

Failure to act could well result in Julian's death, as Greek Australian activist, Yanis Varifoukis, explains in the video embedded below:

Yanis Varoufakis: "They don't want to extradite Assange. They want to kill him."

Post on Twitter: Adelaide For Assange (@ForAdelaide) Protest for #JulianAssange this Saturday, 11am - 1pm at the Malls Balls in Rundle Mall!

At 6:30pm this coming Friday 9 April outside Flinders Street Station, as the world approaches 11 April 2019, the second anniversary of the #e73a42;">illegal imprisonment of Australian journalist Julian Assange, his Melbourne supporters will again be holding their weekly vigil to demand that Scott Morrison his authority as Australian Prime Minister government to make Britain end it's imprisonment of Julian Assange.

As we have done at previous vigils, we will be displaying our banners (one of which is pictured to the left), making speeches and handing out leaflets. We will also be handing out an additional leaflet to promote the International commemoration of the second anniversary, this coming Sunday 11 April, of the British Government's imprisonment of Julian Assange. For details of other commemoration events in Australia and overseas, see Melbourne protest at British Consulate to mark 2nd anniversary of the arrest of Julian Assange - 4:00pm Sunday 11 April (4/4/2021) also published here on candobetter.net and the Twitter @Candles4Assange page.

Please be there, both this Friday 9 April at 6:30PM at Flinders Street Station and this coming Sunday 11 April at 4:00pm at the British Consulate at 90 Collins Street to help us get Australia's visionary, multiple award-winning journalist Julian Assange back to his wife Stella Moris and their two children.

The number of partcipants in our Friday 9 April weekly vigil for Julian Assange in front of Melbourne's Flinders Street Station, due other to commitments by some members of the group, was somewhat down - only 5 this week rather the 9 or 11 we had come to typically expect at our previous weekly vigils. Five people weren't enough to share around the arduous work of holding up my large 4.8mx1.7m banner [1] in addition to making speeches, handing out literature and engaging in discussion with interested members of the public, so the banner was left unfurled.

In spite of this the public responded particularly well, with a large proportion being interested enough to accept one or more of our printed leaflets. Whilst a sizable proportion of the public, who were passing through that street corner in front of the railway station, were still not concerned one way or the other, about Julian Assange, the number who expressed support for him vastly outnumbered those who showed their hostility. Many thanked us for our efforts and a sizeable number told me that they would be coming to Sunday's commemoration of the second anniversary of the British Government's illegal arrest and imprisonment of Julian Assange in Belmarsh Prison at 4:00pm on 11 April 2019 at the British Consulate at 90 Lyons Road, roughly 1.6km to the Northe-East.

Fanny gave a speech, but (yet again!) I was not able to figure out, fast enough to record Fanny's speech, how to use the video recording feature of my mobile phone, so Fanny's speech was not recorded. However, Anita was subsequently able to work out how to use that video recording feature and so my own subsequent speech was recorded. Later today (Saturday 10 April, I will upload that recording of my speech to YouTube and embed it in a more complete article about that vigil on /.

In time, in order to achieve our goal of forcing the Australian government to act effectively to achieve Julian Assange's freedom, we need to, and anticipate getting, far greater numbers to other planned events for Julian Assange. Such events include protests such as our planned commemoration of the second anniversary of Julian Assange's imprisonment. In the short-term future, to begin with, it should be possible to build protests numbering in the order of several hundred - enough to at least begin to make a few more politicians take notice.

So, if you have time, please attend the 4pm Sunday protest at the British Consulate.

[1] That banner has impressed members of the Melboune public on foot, or in cars. It has also, amangst others, impressed Denver Free Assange (@DNVFreeFA). So far, two members of the group each own one umbrell stand. Without those 2 umbrella stands, it would have been necessary for three people, at any one time to hold up the banner. Because it is such hard work to hold up my 4.8mx1.7m canvas banner for our vigils of duration of 2 hours or longer, a minimum of 5 or 6 people were needed to share the work around. It would have been very dificult for us to accomplish the other necssary tasks

[2] The commemoration of this second anniversary will by held at 4pm outside the Melbourne British Consulate at 90 Collins Street, roughly 1.6 km North-East of Flinders Street Station.

From 6:30pm until 8:30pm, this Friday 16 April, Melbourne supporters of Australian journalist Julian Assange will be holding our weekly vigil at Flinders Street Station. If you are free at that time, please come along, help us hand out leaflets and hold banners. We will be giving speeches to explain to passersby the facts about Julian Assange and to demand that the Australian government act to prevent the United States' attempt to extradite Julian Assange and to make Britain end its illegal imprisonment and torture of him.

From 6:30pm until 8:30pm, this Friday 23 April, Melbourne supporters of Australian journalist Julian Assange will again be holding our weekly vigil at Flinders Street Station, where we will be holding banners, handing out leaflets. If you are free at that time, please come along, help us hand out leaflets and hold banners and listen to our speeches.

Help us force the Australian government act to end the illegal imprisonment, so far for almost nine years, of Julian Assange and to prevent the United States' attempt to extradite Julian Assange.

Whilst this figure is still a very long way short of what is warranted by the continued illegal imprisonment of Julian Assange in solitary confinement at Belmash Prison, it enabled us to make our vigil more striking in its visual and vocal impact on passing Melburnians.

For the first time, with the aid of umbrella holders, filled with water to stablise the three poles holding up our very large (2.8m x 1.7m) banner, [1] pictured (again) below, we were able to keep our banner displayed in full for the full duration of the vigil, making its visual impact so much more effective than on previous occasions.

For most of the vigil, a group of Christian evangelists behind us kept talking very loudly through their public address system. At one point they committed to finish after 5 more minutes, but they continued until 8pm. Some of us attempted to give speeches over the loud noise coming from behind, but could not be heard very well. The video recordings of those speeches are not likely to be of much use.

So, against this loud backdrop of noise, we attempted to make speeches through a megaphone and handed out double-sided A5 leaflets to passersby [2]. Our speeches, in addition to our large banner, still aroused interest from passersby causing more to accept a copy of our double-sided A5 leaflet, with a number committing themselves to support other future actions that we might take in support of Julian Assange.

After the Christian evangelists left at 8:00pm, some of us spoke through the megaphone.

I personally spoke on three occasions on the megaphone. Three other participants also spoke. (I will upload the Video recordings of myself and others to YouTube. ) Whilst, I still think that making speeches greatly increases the effectiveness of our vigils, I think my own speeches suffered from my not having them written out prior to the vigil and my not having too many facts about Julian Assange's case, at my finger tips. Consequently they were repetitive and much less effective than they could have been.

Still, given that Julian Assange's case is so open-and-shut it should be possible, in under one minute, to make any curious and open-minded member of the public enraged at his treatment and, from that point onwards, have his/her undivided attention, whilst I proceed to explain all the other outrages committed against Julian Assange. Hopefully, I will be able to do this next Friday. 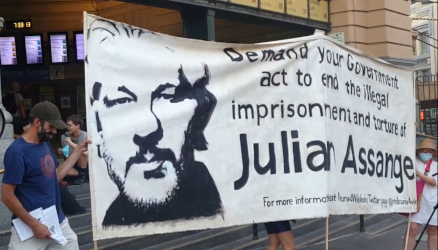 This banner, shown here at a previous vigil, was used again at this vigil, but,
this time for the full two hour duration making its impact more effective.

[2] The PDF file used to print the leaflet was originally attached to my article Barraitser's 'compassion' towards Julian Assange a ploy to avoid judicial scrutiny of the United States' illegal war on journalism? (12/1/21). This PDF file was later adapted to become my article Uphold the Rule of Law - demand that the Australian government act to end the illegal imprisonment and torture of Julian Assange (11/2/21). Whilst we need a new, more up-to-date, leaflet about Julian Assange, please feel most welcome to download the existing PDF file, print more copies of this leaflet and hand them out.

Please help us to bring Julian home for his two children and their mother, Stella Moris (@stellamoris1) by joining us again tomorrow evening (Friday) from 6:30pm outside Flinders Street Station, help us distribute leaflets, hold up our large banner (pictured below) and listen to speeches.

Here's why I couldn't make yesterday's vigil for Julian Assange:

My apologies to Melbourne supporters of Julian Assange for not attending yesterday's weekly vigil or Julian Assange commencing at 6:30pm outside Flinders Street Station.

The reasons I could not make it are:

However (whilst not wanting what makes our vigils necessary to continue - the illegal imprisonment of Julian Assange at Belmarsh Prison), I look forward to seeing you all again at 6:30pm next Friday at Flinders Street Station and at other protests with that banner, which can now display its message to both passengers leaving Flinders Street Station and passing motorists.