United States, get your thieving bloody hands off Venezuela! 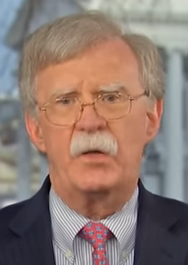 John Bolton wants US oil
corporations, instead of
PDVSA, which is owned
by the Venezuelan people,
to be able to extract,
export & sell Venezuela's
natural wealth (see
embedded video).

The most recent of many attempts by the United States to overthrow the government of Venezuela has also failed, but not without a terrrible cost. According to a 27 page report by economists Mark Weisbrot and Jeffrey Sachs (pdf here) the sanctions imposed on Venezuela since 2017 and theft of billions of dollars of Venezuela's gold and bank deposits have cost the lives of 40,000 Venezuelans, yet, in spite of all these hardships, ordinary Venezuelans, including members of the armed forces, rallied to defeat the attempted coup of 30 April.

The United States government leaders have made little effort to conceal their motives for having caused this much death and suffering. Watch below, National Security adviser John Bolton (pictured above), explain to Fox News on 29 January 2019 how United States' oil corporations will soon be able to able to take over the extraction and export of Venezuelan petroleum once their actions against Venezuela achieves their goal of having their appointed 'President' Juan Guaido take over from from the elected President Nicolas Maduro.

"We're looking at the oil assets. That's the single most important income stream to the government of Venezuela. We're looking at what to do to that. We're in conversation with major American companies now. I think we're trying to get to the same end result here."

The above confirms the worst fears of the motives of the neo-con swamp that still controls the White House's foreign policy: All their platitudes about 'freedom' and 'democracy' for Venezuela are nothing more than a cynical smokescreen to cover their plans to take from Venezuela its natural wealth and hand it across to their corporate mates.

Until these thieving, lying criminals are thrown out of office and, together with their military industrial complex mates, are made to face justice, there cannot be peace.

Will Venezuela finally hold Guaido to account for his treason?

On 23 January 2019, Juan Guaidó, who was virtually unknown in Venezuela at the time, declared himself 'interim President of Venezuela.' He did this at the behest of his masters in the United States government: Secretary of State Pompeo and U.S. National Security Adviser John Bolton. Bolton on at least one occasion shamelessly stated that he wanted U.S. oil corporations to be able to exploit Venezuela's oil wealth once the elected President Nicolas Maduro had been replaced by Guaidó.

In spite of Guaido's clear act of treason on behalf of a country which has repeatedly interfered destructively in the affairs of Venezuela and practically every other country in Latin America since before the start of the twentieth century, Guaidó and his supporters have, astonishingly, been allowed until now, to freely walk around Venezuela in pursuit of their nefarious goals. Guaido has openly asked for an invasion of Venezuela by the United States, and called for the continuation of the sanctions which have so devastated his country, costing 40,000 lives by one estimate!

Finally, nearly eight months later, it seems that the Venezuelan government has finally decided to act against Guaidó, even if not explicitly for the actions described above.

As Stephen Lendman reports in Venezuelan Usurper Guaido to Be Charged with High Treason? (7/9/10):

Until now, his government failed to hold Guaido accountable for sedition and treason, the highest of high crimes against the state.

“We have initiated an investigation (into) an illegal negotiation behind the country's back (by Guaido) that intends to withdraw the historical claim our country has on the territory of Essequibo. The facts imply a crime of treason.”

Preceding his remarks, Venezuelan Vice President Delcy Rodriguez accused Guaido of being part of a “criminal organization” — aiming to hand Bolivarian territory and resources to foreign corporations, including ExxonMobil.

In April, Guaido's parliamentary immunity was lifted. He faces various charges, including “usurping the functions of the president.”

On Thursday, Maduro asked prosecutors to charge him with treason, urging “(t)he Public Ministry and the Attorney General's Office have to act expeditiously because pretending to deliver the Essequibo is a crime of treason to the Fatherland.”

Maduro urged Venezuelans to defend the nation's “legitimate and non-renounceable” territorial rights over the Essequibo region.

Venezuelan Defense Minister Vladimir Padrino defended his country's claim to the territory, saying: “The Sun of Venezuela is born in the Essequibo.”

The territory is located in southeastern Venezuela. It's rich in oil and other natural resources. It links the Caribbean Sea with the Orinoco River.

Venezuelan authorities have audio recordings between illegitimate Guaido envoy to Britain Vanessa Neumann and his “outside advisor” Manuel Avendano to “deliver the Essequibo” to ExxonMobil and other corporate interests, Rodriguez saying:

What’s likely next? Will Guaido be formally charged with treason, arrested, jailed and prosecuted?

He was guilty of the highest of high political crimes against the state by illegally self-declaring himself interim president in January — attempting to illegally usurp power in cahoots with the Trump regime.

Accountability for his criminal actions is long overdue!

The following has been expanded from a tweet in response to Tim Anderson's question, "Spot the difference between Alexei Navalny and Juan Guaidó":

From Maduro Accuses Left and Communist Party of Being Agents of Imperialism (16/2/21) by Ernesto León | Venezuelanalysis:

In the last few weeks, there has been an escalation in the verbal attacks from the Venezuelan government against the revolutionary left. These attacks, by president Maduro and National Assembly speaker Jorge Rodríguez, have been directed particularly against the Popular Revolutionary Alternative (APR), a political platform that gathers several parties and organisations to the left of Maduro’s government. Very serious allegations have been made, including that the left opposition to the government is acting in cahoots with US imperialism.

Up until now, the attacks against the APR had consisted of intimidation, censorship in public and private media, and several acts of repression against APR candidates during the National Assembly election campaign. The most important and serious issue here is that these latest attacks could set the stage for a higher level of repression against the left wing and the workers’ movement.

One of the motives for intensifying the political campaign against the APR could be that, in order to bypass the economic sanctions from US imperialism, as well as overcome the deep economic crisis that currently exists, the Maduro government will go much further to the right, deepening its monetarist policies and increasing privatisations. These types of measures will always mean a heavier burden for the working masses to bear, and within that context the APR could play an important role, organising and leading mass protests against the upcoming package of economic measures.

… The APR and its component organisations have a track record of fighting against imperialism and imperialist aggression, opposing US sanctions on Venezuela. Furthermore, they have consistently demanded that Juan Guaidó be arrested for his participation in a failed coup in 2019, the attempt to overthrow the elected president, his call for a US military invasion, his collaboration with a mercenary incursion, etc. The Maduro government has chosen to let him walk free, while it attacks those who want the pro-imperialist traitors jailed for being “in cahoots with Elliot Abrams”!

My comment: For years I have despaired at the way the Bolivarian government of Venezuela has allowed Juan Guaidó, who openly sides with the United States against that government, to freely walk the streets of Venezuela. Given that at least 40,000 (a very outdated estimate) Venezuelans have died as a consequence of United States' sanctions that Juan Guaidó has repeatedly supported, for President Nicolas Maduro not to have put him on trial for treason is, at best, gross negligence on his part.

Were such a trial to occur in public, the case against Juan Guaidó would be seen by world public opinion to be overwhelming and conclusive.