Plausibles and implausibles in the French Presidential elections 2017

Unexpectedly Nicolas Dupont-Aignan, the president of the Stand up France (Debout la France) has backed Marine Le Pen for President of France. He feels that France must be saved from Macron's savage globalism and believes that many Republicans will join him in this. One can see that on the face of it, Le Pen has slightly fewer prospective votes than Macron, if you go by the form on the nine candidates who didn't make it to the second round and how their voters might now vote. But Le Pen is running a superb campaign and elite favorite, Emmanuel Macron has already tripped over his highly publicised very expensive shoes. As Le Pen has implied, now that the field has narrowed, people will be able to see both candidates more clearly. [The original title of this article was "Le Pen's chances as President improve as Stand Up France's leader backs her & Macron looms."]

Nicolas Dupont-Aignan of Stand up France (Debout la France ) won 4.70% of votes in the first part of the French presidential election (which contains 2 parts). On the 28th of April 2017 as a guest of the 8pm news on France 2, he said that, like so many other political personalities, he might have washed his hands on the subject of who people should vote for in the second election round. He thought that might be more in his personal interest and that of his party but he is convinced that Emmanuel Macron is "Hollande force 10", meaning 10 times worse than François Hollande.

After a lot of thought, he says, the president of the Stand up France party met with Marine Le Pen on Friday 29 April 2017. "We signed a governing agreement evolving her platform, with some changes and even some additions from my presidential policies." He feels that France must be saved. "This evening I officially announce that I will be supporting Marine Le Pen, that I will even campaign with her, on a broader governing project." Nicolas Dupont-Aignan believes that many Republicans will join him in this.

The plausibles and the implausibles: Eleven First Round 2017 Presidential candidates 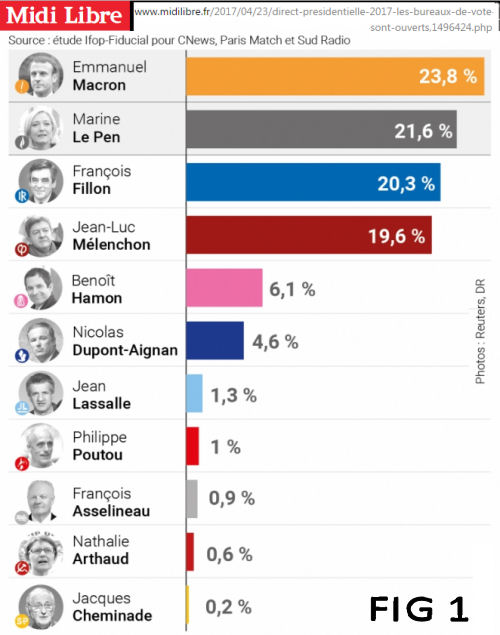 In the first round of the French Presidentials there were 11 candidates, who could be organised according to their positions across immigration, Islam or racism, border control, industrial and pension laws, the EU and Syria. The field was filled with right and left look-alikes and truly implausibles.

The implausibles attempted to confuse the public by straddling the main points of tension irreconcilably: For instance, although workers in France fear oursourcing, privatisation and immigrant competition for employment and housing, those posing as the 'left' (Nicolas Poutou and Natalie Artaud) now promised to defend workers rights, pensions and public ownership, whilst insisting on variations of open borders, racism conspiracy theories, immigrant over citizens' rights and vague anti-war ideals, without detail on Syria. Slightly more three dimensional Benoît Hamon, who split up the left some years ago with Mélenchon, however, also wanted 'firmness towards Russia and more arms',

Among the plausibly implausible were Mélenchon and François Fillon. Mélenchon, a long-time soldier for the Chardonnay left, with a long-term following drew nearly 20% of votes, comparable to Fillon's score. Fillon's policies located him on the 'right' and they ressembled Le Pen's on foreign and EU policy. (Le Pen wants to create a referendum about leaving the EU and she wants good relations with Russia, wants to respect Syria's sovereignty instead of invading it and trying to depose its legally elected president.) Fillon was highly critical of the EU, but drew the line on exiting it. He wanted to cooperate with Russia against ISIS and was against regime-change in Syria. He drew slightly over 20% of votes.

Those on the implausible 'right' had to compete with the National Front, so they also talked about boosting citizens' rights, preventing outsourcing, increasing protection of local product, getting out of the EU or modifying it, border protection and getting out of Syria or even working with Russia and Syria to get rid of ISIS. Possibly the most implausible of the implausibles was Jean Lassalle, from the Pyrenees on the border of France and Spain, who had been mayor of his town for forty years. He spoke very slowly in a thick folksy accent and his thought flow was so circumstantial that he simply could not get to the point. Despite this or because of it he obtained a higher vote than the two lesser socialist workers type candidates, Natalie Artaud and Phillipe Poitou.)

With the exception of Macron, who is shockingly approving of the United States's illegal acts against Syria, most of the 'right' candidates, following Le Pen, desired to end war in the middle east. This is understandable in France, which is located within refugee distance and nuclear fallout from that region. By ignoring this reasonable desire not to interfere in the region, 'centrist' Macron, the EU itself and Britain, seemed more in line with a United States centered outlook than the French perspective. Macron's ridiculous statement that 'France has no culture' seems overtly anti-France and smacks of economic rationalist slogans we have heard in Australia.

By the results from the first round, it looks like most French who voted could tell the difference between the completely implausible candidates, with the exception of Macron. What is left is the question of how their votes will be distributed in the second round, when Macron and Le Pen duke it out.

Macron is overtly backed now by the current government, the EU, and the mainstream press - i.e. all the usual suspects among the power-elite and the forces the world and France have been dealing with for years. After the first round, Benoit Hamon, who ran on a kind of socialist-ecologist-Europhile-anti-racist-porous borders-anti-Syria-pro-USA-NATO line denounced the National Front as racist and inimical and urged everyone to vote against them. Mélenchon could not resist coming out yesterday and said, although he would not tell people who to vote for, everyone should be able to work out that he would vote for Macron. But voting for Macron shows how insincere he is about workers' rights, other socialist principles and anti-economic globalism. For the left these days, open borders trump all their founding principles.

This left Nicolas Dupont-Aignan whose policies were very close to those of the National Front, but described by him as more 'Gaullist'. He was outspoken during the second debate about how Macron had come out of nowhere, powered by the corporate globalist elite and their mainstream media. He held up a sheet of paper featuring all the front pages that had featured Macron and he read out phone texts between him and a mainstream media editor who said they would not give him coverage until he was kinder about François Fillon (former Sarkozy government minister mired in corruption scandal of jobs for relatives). After the first round he said that he would meet with his party members and discuss where they all stood vis a vis Macron and Le Pen. The outcome of this was a strategy, deftly delivered on France 2 on 28 April http://www.francetvinfo.fr/politique/nicolas-dupont-aignan/nicolas-dupont-aignan-je-soutiendrai-marine-le-pen_2166736.html. He said that he had had discussions with Le Pen and some of her staff and that they had reached an agreement for her to take on board some of his policies in a future government. Macron, he said, is far too dangerous an option to vote for because he represents more of the same to which France has been subjected by Sarkozi and then Hollande, in terms of savage capitalism. That leaves Marine Le Pen. When the newsreader exclaimed something to the effect of Dupon-Aignant now advising his members to vote for the extreme right, Dupont-Aignon said, clearly and calmly, that Le Pen was not the extreme right. 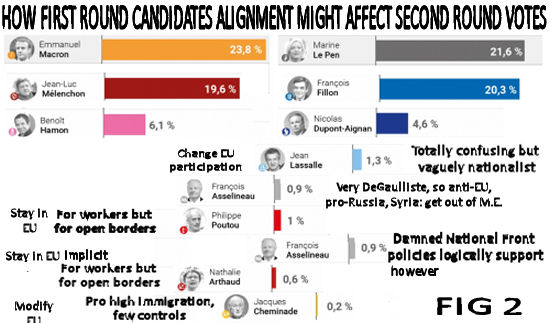 Looking at Figure 2, which is a light-hearted attempt to show how the first-round candidates and their voters appeared to be aligned vis à vis left or right and the main positions, one can see that on the face of it, Le Pen has slightly fewer prospective votes than Macron. But Le Pen is running a superb campaign and Macron has tripped over his highly publicised very expensive shoes with a pretentious and premature Parisien victory celebration vs Le Pen's regional loyalty meeting location; by his behind-closed-doors fraternisation with Whirlpool management when Le Pen was out there with the Whirlpool workers, who are threatened by Whirlpool's taking French subsidies and relocating its factories to Poland; followed by Le Pen's huge rally at Nice, where 86 people had been run down by a truck driven by an Islamic extremist on Bastille Day 2016. Le Pen's post election comments as the guest on France 2 the evening of her coming second, behind Macron, in the first round showed once again her criminal-law barrister skills of defence. Among other brilliantly aimed arrows, she said that it was easy to campaign when the mainstream media and the establishment throw roses in your path, and, that having eleven candidates in the field had created a kind of smokescreen for Macron, but now the mist will clear and the public will be able to see him more clearly for what he really is.

France has no culture?

" Macron's ridiculous statement that 'France has no culture' seems overtly anti-France and smacks of economic rationalist slogans we have heard in Australia. " Surely France has been a focus of European culture, leading the way with secular government, tolerance of the persecuted, and in the arts, architecture, language, history and food? Just like in Australia, without "culture" or values, it's an easy path to globalization, and cultural destruction through mass immigration.

Hard to believe that the French would swallow that one!

With their beautiful cheeses, wines and general cuisine, it is amazing that anyone would try that on the French and expect them to swallow the line "France has no culture". It's been used on Australians for about 20 years and they guilelessly embrace it!