Yesterday at 6.00pm about 200 people gathered on Parliament House steps, Spring Street, Melbourne to show their support for the proposed "Great Forest National Park" and to highlight the need for areas to be included to be protected from logging in the interim.

This rally was under the auspices of The Wilderness Society and of The Victorian National Parks Association. Other smaller groups joined in e.g. Rubicon Forest Protection Group Inc. This group has put out an excellent pamphlet about the need for forest conservation. 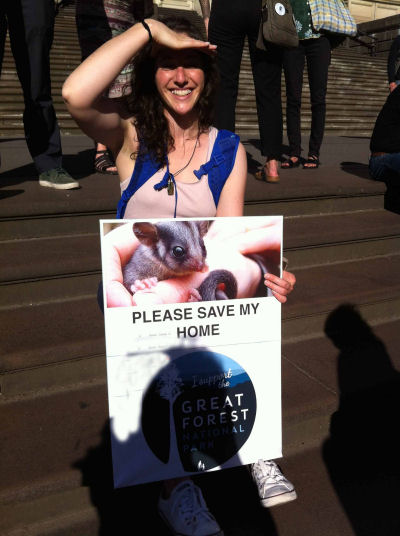 ".....the extensive logging road network cuts though previously intact ash forests and Antarctic Beech/rainforest communities alongside waterways....many coupes show poor regeneration of mountain and alpine ash while others become a monoculture of ash trees lacking a diversity of understorey shrubs and ferns.......Logging or killing by fires of 1939 regrowth mountain ash forests, results in an initial rise in streamflow due to reduced transpiration, but aged 10-15 years the growing forest starts to use more water. Importantly, this effect of lower water yields lasts many decades...." rubiconforest.org 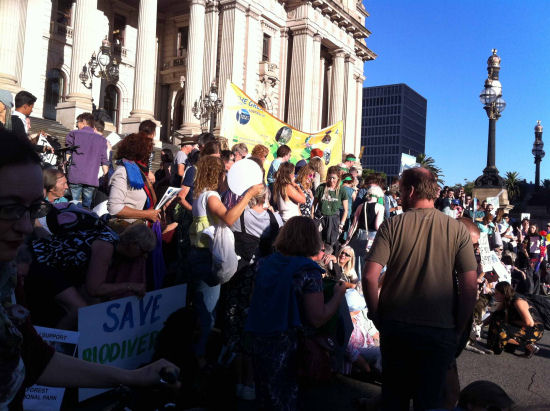 
"...with Melbourne's population set to explode to over 7 million in the next few decades , water security is a huge issue. These Mountain Ash forests provide most of Melbourne's drinking water...intact forests produce conditions that actually increase rainfall and purify our air and water...... "

A point of interest is that parks surrounding Sydney total 1,094,207 ha. Parks surrounding Melbourne total 168,891 ha and, with the Great Forest National Park, would total 522,104ha

The great importance of this rally and the forest issue to the people of Melbourne is that it is all on the city's doorstep.

What can we do?

Participate in online poll "Should the Fairy Possums's forest habitat be protected from logging while the Great Forest National Park is being created?" wilderness.org.au/possumpoll

Show your support for the creation of The Great Forest National Park Text #GFNP to 0428029437
"Like" the GFNP on Facebook at Facebook.com/greatforestnp

On Dick Smith and immigration

John Burke writes: Re. “Dick Smith
versus the migrants” (Wednesday)

In ignoring Dick Smith’s overall approach to the population issue, Bernard
Keane does no one a favour.

Sure migrants have built this country, sure we are all migrants or their
close descendants, sure One Nation is a redneck abomination and sure more houses
could be built if there were the will. Having said all that, it’s disappointing
to see Keane lining up with the growth-without-limit merchants; those people
whose well funded  lobbyists haunt the corridors of our parliaments: the
rent seekers, the unthinking and the greedy.

As Dick has said often enough, we cannot have infinite growth in a finite
world, or in Australia in this case. Our recent rates of population growth will
see us with about 100 million people in another 100 years and with 200 million
50 years later and onwards exponentially. Now as we have grown from the
Aboriginal population to almost 25 million over some 220 years we have wreaked
huge environmental damage on our country. Think the Murray-Darling, think a huge
mammal extinction rate and so on. Think of the devastation should we pursue
growth at our current rates!

Plenty of European countries, as well as others like Japan, seem to manage
well economically with zero or negative population growth, with wealth per
capita being the relevant measure rather than GDP. As for Bernard blaming
nimbyism for traffic and such issues, that’s just silly. If you don’t look after
your own backyard then who will? The countless planning mistakes that continue
to be made in the face of community opposition are testament to the necessity
for ongoing nimby activity.

The interesting thing is that we don’t seem to be allowed to discuss the
future of our population. Keane doesn’t want to, our political and business
leaders don’t want to, out major environmental groups refuse to and so it’s left
to a few people like Dick Smith to carry that flag. If we were to agree that
population growth should stop one day then it behoves us to talk about by what
process that will occur. Shall we, being rational beings, manage our own destiny
or shall we let the rent seekers keep pushing until Australia is on its knees,
environmentally, socially and economically. As David Attenborough has said,
“There seems to be some bizarre taboo around the subject”.

Dick Smith cares about Australia and its future. He needs support and
understanding rather than the sort of facile rebuttal dished out by Bernard
Keane.

http://thelimitedvoid.blogspot.in/2017/02/dick-smith-again-right-on-immi... Keane is taking the Politically Correct view, which is perhaps the standard the crikey requires. They are more interested in appealing to their target market than disseminating useful and correct information. I don't think building more houses will help. Subdivision and allowing development in existing residential areas increases, not decreases the price of land. The more relaxed the restrictions are with regards to what can be built on the 1/4 acre blocks, the HIGHER the price of housing and land. Ironically, increasing supply increases price, as it increases the profit an investor can make through subdivision. The more "boutique" apartments or townhouses that can go up, the more profit from the initial land purchase, and consequently, the more the investor can pay for that land, and still turn a profit. It may sound counter intuitive, but if restrictions were tightened, that is, you couldn't build duplexes or townhouses in what were lots with free standing homes, the investors wouldn't be able to profit from subdivision, and they certainty wouldn't be willing to pay so much. This would depress prices a little, but you'd have to lower the demand side otherwise you will have a real shortage (instead of the fake shortage we have now). So nimbys who stop development aren't raising prices, they are helping put a lid on them!