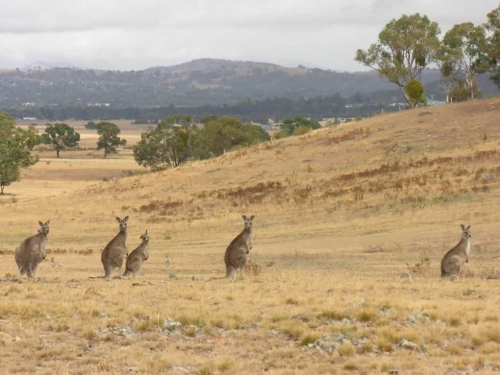 Defence land in Canberra was cleared of supposedly 514 "starving" kangaroos last year that were “threatening” native grasslands and other species. The public were persuaded and conned by the pseudo-science of kangaroos as environmental pests, and their "humane" deaths as the best scientifically-concluded solution. The 149 hectare site at Belconnen, with 19,000 tonnes of waste including asbestos, is now planned to be developed for between 1100-1300 new dwellings!

Now, Majura kangaroos are blamed for threatening several rare species of grasses, insects and lizards due to habitat degradation. This is despite the fact that sheep have created a dust-bowl across the fence, and unsound farming practices are being ignored.

‘...there is a good reason to obtain access to carcasses from at least one future cull which is conducted to an acceptable sampling design.’ (D. Fletcher, Senior Ecologist, Wildlife Research and Monitoring, Environment ACT)

Mr Fletcher is NOT a vet, yet he wants carcasses to do his research on, to assess their "health"! Doesn't this sound like Japan's illegal and brutal whaling? Whaling continues under thin disguises, like Mr Fletcher's excuse to "cull" kangaroos!

Why are thousands of kangaroos being needlessly cruelly slaughtered at Majura when the facts and figures being used by Defence to justify this action are flawed?

The "threatened species" and native grasses are not at threat from kangaroos! No other science has come to the conclusion that Dr Maxine Cooper has come up with! The REAL threats are urban sprawl, heavy grazing from livestock, invasive weeds, rabbits etc. NOT kangaroos! They have evolved and co-existed together for millions of years and the grazing "pressure" from kangaroos is only about 1/3 of that of a sheep.

There are reliable reports of sheep grazing over the fence and have made a dust-bowl there. Why aren't agricultural impacts being assessed! This pseudo-science is about using "science" to justify a pre-determined outcome - the slaughter of kangaroos that are not wanted in the "Bush Capital". 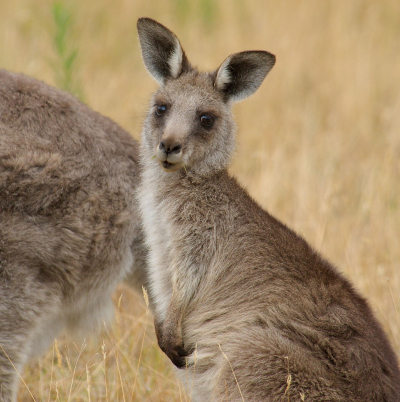 These animals are on our Coat of Arms, and part of our heritage, part of our biodiversity and landscape. Making them a "threat" is purely pseudo-science so that a confused public is lulled and quietened by a "humane" solution!

Three kangaroos per hectare are quite sustainable, as evident! They are NOT STARVING but in peak condition! One kangaroo per hectare is just a way of ensuring that they die off, due to predation, loss of gene pool, human attacks and traffic.

Defence has not produced data to prove there are 9000 "starving" kangaroos, and what their REAL MOTIVES are! Housing estates are due to be built where the last kangaroo massacre took place at Belconnen! Now they will shoot 6000 roos instead of 3000 of these so-called 'environmental pests'!

There is no way of a "humane cull"! They will be running in fear, and bones will be broken, joeys will panic and be lost from their mothers, and the panic and fear and stress from these animals is well known!

If Defence were telling the truth they would let some trustworthy, independent, non-government-funded wildlife vets, entomologists, botanists and other experts visit to see for themselves, but they won’t because they think they can get away with lies and breaking the law by starting the massacre early.

There needs to be investment in wildlife corridors and crossings over roads. Kangaroos could be quite a tourist attraction, a draw-card for Canberra. This massacre is a scandal for Australia and our “management” of wildlife. We have such an abysmal record of animal treatment in Australia, and this killing field will just add to condemnation world-wide!

Tribunal president Linda Crebbin has ordered a stay to the "cull" of kangaroos at the Majura site until the issue can be considered by the tribunal's full panel. The slaughter started before the end of the public submissions deadline was due, and without independent scientific reports, the killings were based on shonky and biased reports. This "stay of execution" should send a strong message to our Government that green-washing , the blaming of kangaroos for environmental damage and threats, will not be so easily swallowed! The army has already massacred 4000 kangaroos. The "overgrazing" of native grasslands excuse for target practice, under the guise of "conservation" and concern for staving joeys, is particularly insidious. Congratulations for the campaigners, and let's hope that the corruption and pseudo-science is exposed ,!

A 'stay of execution' should not apply to Maxine Cooper

The blood of the slaughtered 4000 kangaroos at Majura should be on ACT Commissioner for Sustainability and the Environment, Dr Maxine Cooper. It is she of unqualified authority who is ultimately accountable for one of Australia's worst natural heritage massacres, and Joel Fitzgibbon the immoral gatekeeper of all this. The two of them have lost all credibility. Flagged 'The Fitzgibbon Massacre' and 'The Maxine Cooper Conspiracy', I call on Cooper and Fitzgibbon to be jointly sacked and dragged publicly to be defiled through the powerful International Ecological Court of Justice, if only it existed.

There is a $220 million 4 lane Majura Parkway planned road, taking 90 ha of land, to cross Majura land in Canberra. No wonder Defence and Stanhope were keen to see the kangaroos "managed" by this time, to one per hectare. The scientists were on the payroll of the ACT and it is clear that their Kangaroo Management Plan was more about human convenience than poignant concern for striped legless lizards and golden sun moths! Kangaroo "expert" Don Fletcher claims that the best "animal welfare" for the kangaroos on this land was the "cull" so they don't have to be killed later? What type of defeatist logic is this? The Kangaroo Management Plan was clearly not based on robust science, and there was no logic or science about adhering to one kangaroo per hectare except that the land was earmarked for development. Kangaroos do not threaten their ecology or endangered species. However, 4 laned highways do! Maybe the ACT could pay to independent scientists to write a report about non-lethal kangaroo and wildlife management. With wildlife corridors and crossings to minimise environmental impacts, kangaroos, legless lizards, sun moths and roads should be able to co exist with minimised impacts.

The reliance on generic terms like 'scientist' and 'expert' to try to justify wildlife killing and habitat destruction, mean nothing. Any land use proposal in Australia that poses an adverse impact on Australian wildlife species, should require a mandatory Environmental Impact Statement including a report by an independent zoologist(s) to assess the various impacts of the land use development on native species (both flora and fauna). Given the vast areas of habitat that have been destroyed (over 75% of NSW), no native species can any longer be assumed to be prolific and so not at risk of decline and local extinction. Such a test would demonstrate the ecological costs of land use development. By the way, on the subject of 4-lane highways, there is one being build across the Blue Mountains, threatening the integrity of the World Heritage Area; also one down the NSW South Coast north of Jervis Bay and up north along the Pacific Highway. The NSW RTA has a mandate to build bigger and faster roads. Hundreds of millions is funded by both the NSW and the Federal Government's Infrastructure Australia department to build massive expressways.