Since 26 July it has been known that Malaysian airlines Flight MH17 was shot down by Ukrainian air force figher jets and not by a surface-to-air missile launched by anti-Kiev-regime rebels on the ground. German commercial passenger airline pilot Peter Haisenko closely examined photos of the wreckage on the ground and found exit and entry holes on both sides of the flight cabin holes that could only have been made by projectiles such as are fired by the 30 millimetre cannon with which Ukrainian Sukhoi 25 (Su 25) fighter planes are armed. At least one SU 25 was observed near MH17 by Russian radar. Witnesses on the ground saw two Sukhoi 15 fighters near MH17, whilst the Kiev regime has denied that any of its fighters were in the area.

In the face of this overwhelming evidence and much eyewitness testimony from the ground below, Australian Prime Minister Tony Abbott, Foreign Minister Julie Bishop and Opposition Leader Bill Shorten continue to libel the anti-regime rebels, as culpable for the crime. Russian President Vladimir Putin, who allegedly supplied the rebels with the missiles with the surface-to-air missiles, has also been persistently condemned without evidence by these Western politicians, who are bringing the world towards war.

Listed below are selected GR references pertaining to the downing of MH17 by a military aircraft, which were used as source material for the NST article.

KUALA LUMPUR: INTELLIGENCE analysts in the United States had already concluded that Malaysia Airlines flight MH17 was shot down by an air-to-air missile, and that the Ukrainian government had had something to do with it.

This corroborates an emerging theory postulated by local investigators that the Boeing 777-200 was crippled by an air-to-air missile and finished off with cannon fire from a fighter that had been shadowing it as it plummeted to earth.

In a damning report dated Aug 3, headlined "Flight 17 Shoot-Down Scenario Shifts", Associated Press reporter Robert Parry said "some US intelligence sources had concluded that the rebels and Russia were likely not at fault and that it appears Ukrainian government forces were to blame".

This new revelation was posted on GlobalResearch, an independent research and media organisation. (emphasis added)

They also denied all allegations made by the Russian government and said the country's core interest was in ensuring an immediate, comprehensive, transparent and unbiased international investigation into the tragedy by establishing a state commission comprising experts from the International Civil Aviation Organisation (ICAO) and Eurocontrol.

"We have evidence that the plane was downed by Russian-backed terrorist with a BUK-M1 SAM system (North Atlantic Treaty Organisation reporting name SA-11) which, together with the crew, had been supplied from Russia. This was all confirmed by our intelligence, intercepted telephone conversations of the terrorists and satellite pictures.

"At the same time, the Ukrainian Armed Forces have never used any anti-aircraft missiles since the anti-terrorist operations started in early April," the statement read.

Yesterday, the New Straits Times quoted experts who had said that photographs of the blast fragmentation patterns on the fuselage of the airliner showed two distinct shapes — the shredding pattern associated with a warhead packed with "flechettes", and the more uniform, round-type penetration holes consistent with that of cannon rounds.

Parry's conclusion also stemmed from the fact that despite assertions from the Obama administration, there has not been a shred of tangible evidence to support the conclusion that Russia supplied the rebels with the BUK-M1 anti-aircraft missile system that would be needed to hit a civilian jetliner flying at 33,000 feet.

Parry also cited a July 29 Canadian Broadcasting Corporation interview with Michael Bociurkiw, one of the first Organisation for Security and Cooperation in Europe (OSCE) investigators to arrive at the scene of the disaster, near Donetsk.

Bociurkiw is a Ukrainian-Canadian monitor with OSCE who, along with another colleague, were the first international monitors to reach the wreckage after flight MH17 was brought down over eastern Ukraine.

In the CBC interview, the reporter in the video preceded it with: "The wreckage was still smouldering when a small team from the OSCE got there. No other officials arrived for days".

"There have been two or three pieces of fuselage that have been really pockmarked with what almost looks like machinegun fire; very, very strong machinegun fire," Bociurkiw said in the interview.

Parry had said that Bociurkiw's testimony is "as close to virgin, untouched evidence and testimony as we'll ever get. Unlike a black-box interpretation-analysis long afterward by the Russian, British or Ukrainian governments, each of which has a horse in this race, this testimony from Bociurkiw is raw, independent and comes from one of the two earliest witnesses to the physical evidence.

"That's powerfully authoritative testimony. Bociurkiw arrived there fast because he negotiated with the locals for the rest of the OSCE team, who were organising to come later," Parry had said.

Retired Lufthansa pilot Peter Haisenko had also weighed in on the new shootdown theory with Parry and pointed to the entry and exit holes centred around the cockpit.

"You can see the entry and exit holes. The edge of a portion of the holes is bent inwards. These are the smaller holes, round and clean, showing the entry points most likely that of a 30mm caliber projectile.

"The edge of the other, the larger and slightly frayed exit holes, show shreds of metal pointing produced by the same caliber projectiles. Moreover, it is evident that these exit holes of the outer layer of the double aluminum reinforced structure are shredded or bent — outwardly."

"It had to have been a hail of bullets from both sides that brought the plane down. This is Haisenko's main discovery. You can't have projectiles going in both directions — into the left-hand-side fuselage panel from both its left and right sides — unless they are coming at the panel from different directions.

"Nobody before Haisenko had noticed that the projectiles had ripped through that panel from both its left side and its right side. This is what rules out any ground-fired missile," Parry had said. 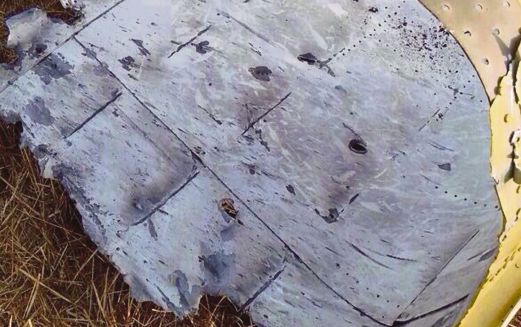 The holes in the wreckage of Malaysia Airlines flight MH17 are believed to have come from 30mm cannon fire.

Evidence
Is Now Conclusive: Two Ukrainian Government Fighter-Jets Shot Down
Malaysian Airlines MH17. It was Not a ‘Buk' Surface to Air Missile

Systematically Reconstructing the Shoot-Down of the Malaysian Airliner MH17: The Guilt Is Clear and Damning

No Evidence of a Missile Attack. Shot Down by a Military Aircraft?"

Washington's Determination to Drive the World to War": Will Putin Realize That Russia Holds The Cards?

Revelations of German Pilot: Shocking Analysis of the "Shooting Down" of Malaysian MH17. "Aircraft Was Not Hit by a Missile"

Intelligence analysts in the United States had already concluded that Malaysia Airlines flight MH17 was shot down by an air-to-air missile, and that the Ukrainian government had had something to do with it. Associated Press reporter Robert Parry said "some US intelligence sources had concluded that the rebels and Russia were likely not at fault and that it appears Ukrainian government forces were to blame". Malaysian Airlines confirmed that the pilot was instructed to fly at a lower altitude by the Kiev air traffic control tower upon its entry into Ukraine airspace. Spanish air traffic controller claimed it was not an accident, that the Ukrainian authorities shot down MH17 and were trying to "make it look like an attack by pro-Russians" . His Twitter account was closed down shortly after the tragedy.

Although his account has yet to be fully corroborated, some of his claims have been confirmed by Malaysian Airlines and the Russian authorities.

Despite claims to the contrary, there has not been a shred of tangible evidence to support the conclusion that Russia supplied the rebels with the BUK-M1 anti-aircraft missile system that would be needed to hit a civilian jetliner flying at 33,000 feet. How could such a conclusion be formed so early, before full investigations? Pro-Russian activists fighting the Ukrainian government said the jetliner had been shot down by a Ukrainian jet.

Looking at photo-reconstruction, one can easily tell that the SU-25 or other fighter-jet that was firing into the cockpit from the pilot's left side didn't just riddle the area surrounding the pilot with bullets, but that it then targeted-in specifically onto the pilot himself, producing at his location a huge gaping hole in the side of the plane precisely at the place where the pilot was seated.

Evidence Is Now Conclusive: Two Ukrainian Government Fighter-Jets Shot Down Malaysian Airlines MH17. It was Not a ‘Buk’ Surface to Air Missile (8/8/14) by Eric Zuesse on Global Research

There were 270 eyewitnesses of the explosion of the TWA 800 who said they saw what looked like a missile strike the aircraft. The testimony of these witnesses was corroborated by radar data and the investigators ignored all these witnesses. There were three investigations into TWA800 that did not agree with the "official" story. One was by the Union for aircraft workers, one by the organization for retired air crash investigators, and one by the NTSB (National Transportation and Safety Board).

Operation Northwoods (see Wikipedia page - Ed) was a series of proposals written by Department of Defense back in the 60s, which directly advocated committing acts of terrorism within the United States, and even proposed shooting down a civilian airliner in order to blame it on Cuba, and this would be used to justify a war. These documents were declassified in 1997, and there are thousands of copies available for download on the internet (for example this one from George Washington University). On July 3, 1988 the U.S.S. Vincennes shot down Iran Air Flight 655 killing 290 people. The TWA flight 800 tragedy occurred exactly 18 years before the MH17 tragedy, on the very same day. On July 17, 1996 TWA flight 800 was downed over Long Island.

Kiev confiscated the voice recordings of the Ukrainian air traffic controllers and is not making them available and if the US Military do not release their radar and satellite raw data, chances are slim that we get the undoctored versions.

Exclusive: Deep inside Ukraine, we track the murderers who shot down flight MH17, killing 38 Australians.

It seems that his will be the first of 3 stories covered in the one hour program. Let's hope that 60 Minutes gives some justice to the 38 Australians, amongst the 298 victims of the Poroshenko regime's botched act of false flag terrorism.