Observations and reflections of a suburban tree

My first memories are of when I was a tiny sapling amongst my contemporaries bordering the fence line of a sprawling four bedroom house, a house which was the height of fashion in architecture back then in 1912. It was a lovely environment for me to grow up in as it was for the children who lived in the house. They used to spend a lot of time with us outside, especially in the warmer months. They had a swing suspended with ropes from a branch of one of the larger trees. Mostly they took it in turns, but occasionally they would quarrel over whose turn it was next. One of the children built a tree house in that same tree and used to sit up on high, higher than I was, reading his favourite books and eating biscuits. 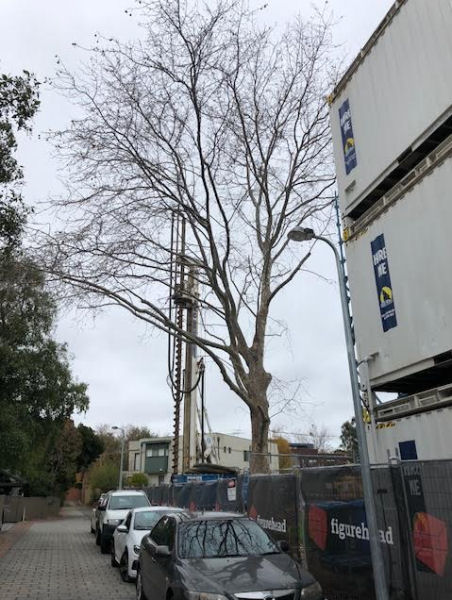 Eventually the children grew up and moved away but not before many happy social occasions in that garden which became more complex and beautiful as we smaller trees grew, spreading and intertwining our branches, casting a filigree shade on the lawn.

End of the first era

The day the house was sold, we all looked on with trepidation. The first couple who had bought it moved to another city after being there for nearly thirty years We had enjoyed this family who didn't make a lot of demands on us and included us in their alfresco entertainment, rarely causing any cuts or abrasions of our roots with the lawn mower.

The house was auctioned and we trees were an important part part of the marketing campaign! I was thrilled and proud. The older trees had acquired an absolute grandeur of scale with their straight trunks. Although I say it myself, I was a very attractive … with delicate blossoms in summer. I was developing a character of my own.


The house sold at auction for more than twice what "my family" had paid all those years ago. The new family had three children, already teenagers. We didn't see the same games played in the garden, but the children did spend a lot of time with us. The boys used to kick a football to one another, often bumping me in the same place on my trunk each time. It didn't really hurt, but was a little annoying. Despite this minor irritation, we were all good friends and co-existed happily. By this time I could see out into the street. I could not see over the house but, as I was near the fence, I had been looking out into the street for some time. It was interesting watching the passing trams, the cars, all in different colours, and the horse drawn vehicles. I came to know when the grey horse would pass by with ice for the ice chest inside our house and the brown horse hauling the bakers cart. They were happy days and I was never bored. I saw things slowly change over the next couple of decades. I no longer saw the horses, I saw more cars. The trams still rumbled along the track on the road.

One day I got a terrible shock! I had been very friendly with a eucalypt over our fence. He was about my age but quite a bit taller. He used to enjoy watching what went on in our garden and we would chat over the fence. On this terrible day there was an ear splitting noise. I saw a man aloft in the next door tree. He was cutting off the branches some of which fell on top of me and into our garden. The next door tree looked terrified and was moaning with pain. I didn't know what to do and felt paralysed with grief. My friend was being decimated before my eyes. It was my first loss.

I was sad when our first family left but I am a tree and I felt far more about losing a fellow tree than about people. Furthermore, I knew that our family was happy to be leaving, and were looking forward to new adventures. This loss of one of my kind, so sudden and unexpected, touched me at my very roots. Within an hour my friend was gone. I watched as, branch by branch, he disappeared and, finally, with a loud crack, he was felled to the ground. I was devastated, as were my contemporaries and the older trees. A silence fell in our garden for the next week. Gradually we started to talk and expressed our fears to one another. If this could happen to our neighbour what was to stop it happening to any of us?

Apart from this fear things did not feel the same without our friend and neighbour. We were in shock, in fact, especially me. For the next few months I looked over the fence to see what was happening, why my friend had been removed. Small green sprouts started to appear and by summer there were a number of red fruits, tomatoes The man next door pulled on some of the leaves sprouting out of the ground - carrots , things he seemed to value highly and collect in a wicker basket. I could see that this produce could not have been grown with a large tree over shadowing and taking up space but was it worth the sacrifice?

As years went by I got used to the new climate since our neighbour had been felled. I accepted the afternoon heat on my western side which had previously been shielded.

Decades went by. The view into the street was far busier but less varied and interesting . The cars became large and square, more like buses. The trams still rumbled by, but sported a different more streamlined look. My job of absorbing carbon dioxide became harder and I felt tired more often.

Fast forward to 2018. The house was sold again. We trees were not at all a marketing feature this time. The board at the front showed an ominous red outline around all of us seen from above and in context with other neighbouring properties. We were in the firing line. I could see that. The red outline meant that all land within it could be utilised, built on, and be a rental earner. Auction day came. The property sold for $2.16 million. The house did not count at all. People hardly looked inside. This was land value only, and the value was 300 times that of the land and the brand new house back in 1912!

A feeling of doom come over me. I knew nobody would ever live in the house again. No children would ever again swing from our branches. There would be no more footballs kicked into my trunk, no more lazy summer afternoon parties in the shade of our branches.

The bulldozers arrived. I trembled to my deepest roots. One by one members of my family were cut down as had been my friend from next door all those years ago. This time it was devastation. By the end of the day, nothing was left but me standing right on the edge near the fence, alone. I was just a specimen, a reminder, a nod to what had been before.

As night fell, the cries of displaced possums reached me. Distress was in the air. My loneliness and fear were overwhelming. What was my future? What was going to surround me from now on?
The next day all was quiet. No work was done and rain fell on scars of what had been a haven in suburbia, a quiet place of contemplation. All was awash with gritty tears from a heavy sky.
A few days later the excavations began. Different coloured layers of clay were exposed as the earth that had supported my family of trees was discarded as a waste product of what was about to be constructed.

Now my roots are surrounded by concrete. I stand alone in an expanse of paving and concrete. I am dwarfed by a six storey block of apartments. Most of my view to the street is blocked by the width of this characterless edifice. It doesn't matter. I have lost interest as I have no company apart from two displaced magpies who now have nowhere to search for food.
It makes me think of an old song that I used to hear through the windows of the sprawling four bedroom house

A caller on Jon Faine's show this morning, speaking out for Elsternwick complained that - all the car yards along the Nepean Hwy will be replaced with 12 storey apartment blocks but that this represents only 30% of what they are about to do - the rest will be demolitions - (Do people do a direct swap of house to apartment? Someone I know did this - a run down house and garden for a townhouse on much smaller land! Jon Faine asked the caller "Are you against anything being built?" The man replied "No I'd be happy with 6 storeys," and Jon Faine then filled in the rest -"with lower rise going back from the highway." How reasonable they both are! The 12 storeys several deep is probably an ambit proposal from developers and with 6 storeys being their fall back position!

Developers have declared war on citizens

How can adults be so gullible, and how can they not realise that they have to fight the developers. This is war by bulldozers instead of tanks, but it is war.