Twenty Thirteen where shall we meet?

Twenty thirteen awaits us tomorrow. What is reasonable to expect of the year which some may see as being an unlucky number? Should we reach for the sky or just try to maintain business as usual? 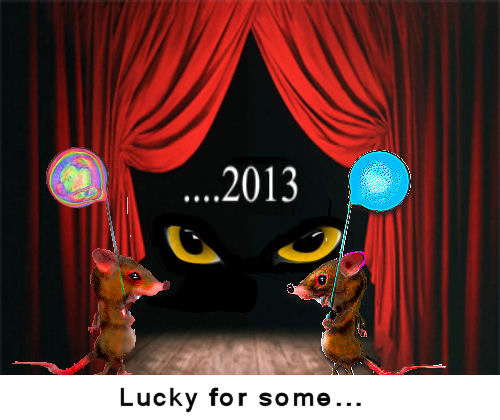 Twenty thirteen, where have you been?
At midnight, where shall we meet you?
We’ve known you were there, so far and so fair
Unlucky some say. It’s the number.

But is it just numerals that signify doom?
Or is it the way we are living?
The Earth’s still benign; to me it’s a sign
That something is there that’s worth saving.

For most of this year we did not live in fear
But we addled our heads with vexation.
Our Earth’s getting hotter, this seems to be clear
It’s really much worse than taxation.

But the little we do keeps us right on and true
Towards the temperature that’s untenable!
What should we do as we open the flue?
And fill up all our convertibles?

Twenty thirteen, didn’t think I would see,
A year so far into the future!
How would we explain all the chaos and shame?
To a person long dead at this juncture?

If things were bad in eighty four
We were losing species by the score
2012 was worse with little hope
Population's up, should we blame the Pope?

The Arab Spring has done its thing
With tensions and power struggles arising
Was it all good? Did it do what it should?
Or is there something that it’s disguising?

I wonder anew at all the “to do”
Europe’s Germany much like a strict father
What worries me most is not burning the toast
But the economia of “Ellatha” *.

We stand upon the Fiscal Cliff
Marionettes precariously dangling
What strings to pull to mend the rift
caused by money printing and wrangling?

But that’s not all, we’ve hit the wall
What will be left, what’ll be the score?
Twenty thirteen, it’s too much to ask of you
To fix it all is too big a task for you!

Twenty thirteen, it’s too much to explain,
But you know what I mean, to you, it’s plain
The things to be fixed are so fundamental
And it’s all strung together, it’s elemental.

* Ellatha is Greek for Greece