ALEPPO, SYRIA, 8 SEPTEMBER 2015: I have several points that I would like to share with you, they might shed a light or help us understand what's really going on. They might be unrelated, contradicted, or has an argumentative nature. I'll share my own ideas, and those of my Syrian friend who moved to Germany 2-3 years ago.

- The hysteric focus on the immigrants to Europe, is to create a public opinion, to support the European governments and armies to interfere in Syria, under humanitarian grounds. It's like scaring their people: "If we don't go to war, Europe will be invaded by Muslims, Arabs, Africans, and Asians."

Why the focus on Syrian refugees?

- Refugees to Europe (and North America and Australia in lesser numbers and portions) have never stopped since the end of WWII. Sinking boats filled with illegal refugees have never stopped in the last decades, and they used to be either totally ignored or partially shown at the end of the news, just to feel a little pity about that tragedy. The whales who committed suicide at the shores would have more cameras though. So what had changed today to focus on the Syrian refugees?

Not all Syrian refugees are Syrian

- A new Syrian refugee who made it up recently to Germany, told my friend over there, that Syrian refugees with him were about 20% of the total refugees on the boats and trains! The rest were from North Africa, Afghanistan, and even from Balkan states (southeastern Europe), yet the mainstream media focus only on Syrian refugees, or worse, call them all as Syrian refugees!... Although I admit that I'm not following the news, [...] but I remember watching some news by coincidence showing refugees reaching different areas in Europe, and I thought that they look like Afghanis or Asians. Then I guessed that they might be Kurds? I didn't give it more attention, till I received that interested note from my friend over there. So what does it mean? Does it mean that many nations are taking advantage of the Syrian crisis, and immigrating to Europe as Syrians? From another source, I heard that some Lebanese are doing so right now, going to Europe as Syrian refugees. Some Syrians families did the same in the 80's, immigrated to Sweden and pretended that they are Lebanese fleeing their civil war....

The game of exaggerated numbers

- Or, European governments do know where these refugees are coming from, but they are turning a blind eye, to make the numbers of the alleged Syrian refugees 10 times more? The game of exaggerated numbers of dead, wounded, and refugees had been played a lot in the last 5 years. When NATO interfered in Libya, they said that "Qaddhafi's army" had already murdered dozens of thousands of Libyans around Benghazi, and they had to interfere to avoid a massacre of hundreds of thousands. After the toppling of the Libyan state, the real numbers came out, that the casualties were around 200-250, half of them were Libyan policemen and pro-government officials. Lies in numbers today about the real number of Syrian refugees to Europe is very possible. Maybe few years from now, the real numbers will shown, as one tenth or less than what they are shown now on the media.

Is the West coordinating ethnic and religious triage in selecting refugees for a reason?

- There is some two year old gossip, that each European state is taking certain type, sect, or ethnic group of Syrians, to divide them forever. I remember that Cyprus was accepting Syrian Orthodox Christians refugees, while other states were accepting Protestants, Catholics,...etc. Syrian Circassians were asking to take refuge in Russia but Russia offered to support them to stay in their lands. Syrian Armenians were immigrating to Armenia. That wasn't the same for Muslim sects. Iran and Hezbollah for example, are supporting the Shi'a community to stay in their land and to defend it. It was so obvious to me when Da'esh attacked the Assyrians and ancient Christians in northern Iraq, and kicked them out of their homes and towns: France invited them to come right away, as if Da'esh and the French government were working together to cleanse the Levant and the Middle East from its original authentic nations to replace them with all the international trash militias they brought from overseas. Each time a Christian village or town attacked in Syria, France or other European state offer them safe haven outside of Syria. That way of scattering the Syrian people around the globe is a very evil plan.

Rather than help us leave, help us to stay in Syria

- There is an argument about what European states had to do: If they helped the poor Syrian (or other) refugees of seniors, women and children, we say over here that they are cleansing our communities and nation in a systematic pattern. However if Europeans didn't do anything for the Syrians, we will say over here that "No one is helping or giving a hand or offering us a visa as refugees in their states." Part of that type of problematic thinking is because of the dominant idea of "conspiracy theories" over here. Long history of fooling the Arabs made them so suspicious about everything, sometimes not in a healthy way.

I think that supporting people to stay in their lands and to defend themselves instead of simply helping them to leave, might be one of the answers of that ongoing argument.

What do you think?

Turkey is organising illegal migrant flood to Europe in busloads

We have the evidence. Was just watching a CNN report from Turkey, which was reporting on the Refugee crisis. What he stated was the following. 1) That these were a new wave of refugees from across Syria. The earlier 1.5 million continued to live in the Camps. 2) So they were flowing in across the border after which they would assemble in certain town where there would be buses waiting in BROAD DAY LIGHT!! 3) This was happening with Turkish policemen standing right there 4) After which the buses would ply to the Turkish coast, get the people into boats run by Smugglers and Human Traffickers, who then take them and dump them into the Greek Islands,from where they would start heading towards Germany, the promised land. Its all happening due to the complicity of the Erdogan-Dovutoglu Govt and Turkish Intelligence. The target as we all know is to provoke a war on Assad's Syria. Also another immediate target is the November elections. Today the Kurdish party HDP HQ has been attacked. With the growing "terror attacks" in Turkey by the "PKK". The Turkish Jets are attacking PKK targets in Iraq. Unfortunately even the opposition secular centrist CHP and the ultra-nationalist MHP (very anti-Kurdish), both have succumbed to do growing nationalist rhetoric and have voted for Turkish strikes in PKK areas of Iraq. This does not bode well for them electorally, as now the AKP seems to be controlling the political narrative. The essence of that is that basically the Kurds in the South-East need to be reigned in and the Syrian Kurds need to be neutralised. For which only the AKP can - vote Erdogan - vote Dovutoglu, get us a majority, break the back of the Kurdish HDP party. For that we will worsen the war in Syria, send in more Isis into Aleppo and Idlib. And send in a flood of refugees into Europe so that they are compelled by public opinion to support our war against Assad!! This is what its all about.

The reports on CNN by Ivan Watson, from Izmir Turkey.

It's all happening right there in broad daylight.

Shops are selling Life-Jackets to the Refugees, who are waiting out there in the open.

It's all being micro managed and overseen by Turkish Intel beyond doubt.

This is not some surreptitious smuggling operation. It's happening in broad daylight wth tv crews interviewing the refugees in Izmir.

Photos taken from TV set below: 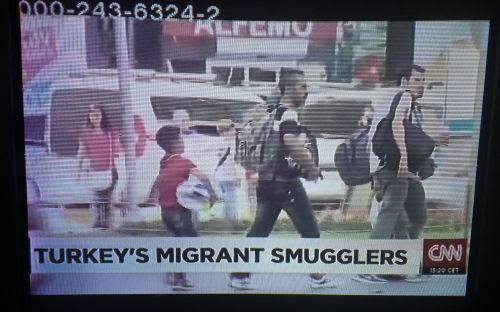 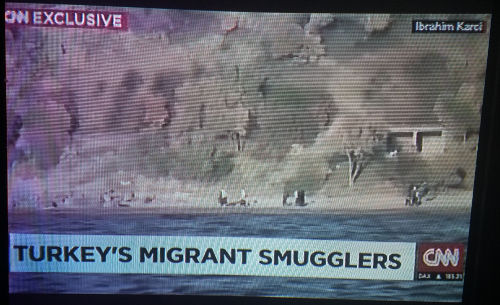 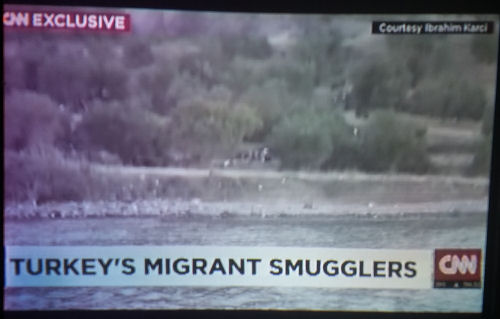 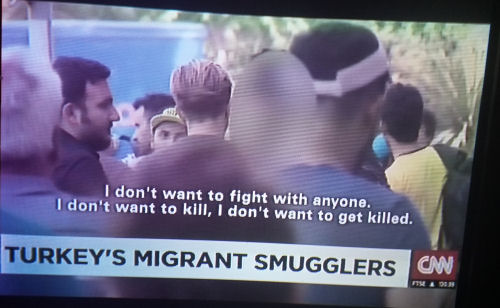 The Syrian Girl video: #RefugeeCrisis: What the media Is hiding

This comment has also bee posted to #comment-262765">JohnQuiggin.com and Online Opinion. Below is of the start the transcript of the above 13:24 minute video "#RefugeeCrisis: What The Media Is Hiding, Help #SyrianRefugees Go Home" by Mimi al Laham, also known as "the Syrian Girl".

This is Syrian Girl. The media's Painting the refugee crisis as an acuteissue, but the Syrian war and refugees had been there for four years and Aylan [Kurdi] wasn't the first child refugee to drown. Last month an eleven year Syrian girl old drowned off the coast of Egypt. So, why is there such a media push now? Well, it's just in time for when France, Britain and Australia were asked to join the US's war on Syria. In fact, the US asked Australia to join his coalition a week before Aylan died. So, they're using sympathy for this child's death to drop bombs on more children while crying crocodile tears over them as they run from those bombs.

Just look at this headline from the Sun: "BOMB SYRIA" "FOR AYLAN". You'd think they'd make themselves less obvious. This is the city that Aylan comes from. The area was blown to smithereens by the US. Rupert Murdoch couldn't even wait for Aylan's body to go cold before he started exploiting it for more war on Syria. ...

Australia's illegal war is against the people of Syria

This has been #comment-262779">posted to a discussion on Syria on JohnQuiggin.com

I note that you have yet to provide even one source to substantiate your own views on the Syrian conflict.

Presumably, I was right to #comment-262752">say that you are arguing that the video that I #comment-262557">linked to on September 4th, 2015 at 02:16 on the "Monday Message Board" of 24 August 2015, and innumerable others like that video were staged and that many thousands of very good actors were hired to stage those videos. Presumably you also think that the many more Syrians, whom we are told by the MSM, oppose President al-Assad have been hidden away from the view of all the local and international journalists who recorded those scenes.

... you trust the five international observers because when they made their claims they were not contradicted on the spot by their audience of journalists.

If the mainstream media claims about Syria were true, then what those observers told the press conference must have been a pack of lies. Any competent journalist would have had no trouble in tearing to shreds the claims made by those observers. The fact that none of the observers' claims were challenged shows me that either :

1. The journalists, who had been reporting elsewhere that Bashar al-Assad was a brutal mass murderer, were grossly negligent in not having put that to the observers, or

2. Those journalists knew that the 'reports' they had written about Syria were untrue and that they would be shown up for the liars that they were if they had attempted to present that narrative to the press conference.

Given that the Syrian conflict was so much the focus of the news at the time, how do you explain the complete failure of the media outlets that had so demonised President Bashar al-Assad to even utter a word at that media conference, let alone report it?