(This article has been republished as an article here, with thanks, after it was submitted as an anonymous comment here. Headings have been introduced by candobetter editor.)

The co-founder of the medical charity Doctors Without Borders, Jacques Beres, discovered some interesting information while treating Syrian rebels in the besieged city of Aleppo. He says the fighters aren’t focused on the fall of the Assad regime. Instead, they have their eyes on a different kind of prize – implementing Sharia Law throughout the country. Overpopulation, draconian monotheism, rising enforcement of Sharia laws, declining democracies, and religious intolerance is an awakening deep set powers and rebellion, and spreading the dis-ease of unrest. It fosters rebellion, hatred, suffering, division and persecution. 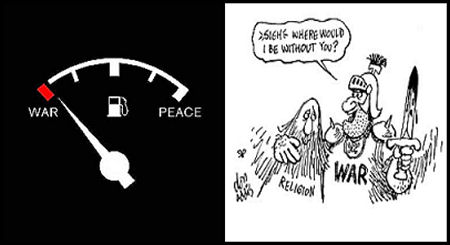 There are the forces who have long opposed the rule of Assad based on faith. Assad is an Alawite, a mystical sect based on Shiite Islam that held most of the ruling offices as a minority in Syria. Nearly three-quarters of Syrians are Sunni, and some consider the Alawites to be non-Islamic.

In Iraq around 60% of all Christians have fled. Also, in Saudi Arabia not one single Christian church or Buddhist temple is allowed. Ten million Coptic Christian minority in Egypt now faces greater Sharia Islamic law and persecution. The iron grip of religious extremism is an wakening force, being propagated by illegal wars.

Syria of Assad is a place where Alawites, the Druze, Christians, Sunni Muslims, secularists, socialists, and others, are (were) part and parcel of society. Also, Afghanistan and Iraq were SECULAR societies which were overthrown by America and its allies. Egypt is now entering a stage of GROWING Sharia Islamic law and anti-Christian persecution. The Obama administration WELCOMED the demise of more liberal forces which have been replaced by the “radical Sunni Islamic Arab Spring.”

Syria which was multi-ethnic and multi-religious and secular – but then Obama insisted on supporting an opposition which isn’t unified and whereby radical Sunni Islamists were waiting in the wings in order to take power. This is despite the fact that this nation, Syria, was LIGHT-YEARS ahead of pro-Western supported nations like Saudi Arabia – with their religious Sharia laws. Syria shames nations like Turkey where Christians and Alevi Muslims suffer such blatant discrimination.

Assad and the government of Syria are fighting to maintain the sovereignty of Syria and the military of this nation, which is multi-religious. The losers are always moderate and secular Muslims, and Christians, such as those who make up the vast majority of Palestinians and Syrians. There's hatred for Assad’s minority Alawite sect, an offshoot of Shiite Islam that some Sunnis reject as not being Islamic at all.

Those battling the secular Bashar al-Assad regime are NOT trying to create a “democracy” with “human rights” for all. Instead, they are waging so-called "holy war,” to build an Islamic dictatorship under Sharia law as part of an emerging international Muslim system. As The New American and several other sources, including U.S. officials, have documented for months, a large percentage of the Western establishment-backed fighters are actually openly affiliated with al-Qaeda.

More than 20,000 people have been killed since the start of the conflict and over 250,000 have fled Syria, according to the U.N. Read more at "Human Rights Group Says Syrian Opposition Committing War Crimes" of 17 Sep 2012 at http://www.businessinsider.com/syrian-opposition-committing-war-crimes-2012-9#ixzz26la34iWS.

Around half of the rebel fighters in Syria are foreign Islamists who aren’t interested in toppling the Assad regime. Instead, they’re seeking to implement SHARIA LAW throughout the country, according to a prominent French doctor.

­The co-founder of the medical charity Doctors Without Borders, Jacques Beres, discovered some interesting information while treating Syrian rebels in the besieged city of Aleppo. He says the fighters aren’t focused on the fall of the Assad regime. Instead, they have their eyes on a different kind of prize – implementing SHARIA LAW throughout the country.

According to all contemporary schools of Islamic jurisprudence, converting to another religion is a crime punishable by death, in accordance with the Prophet Muhammad's command: “Whoever changed his Islamic religion, then kill him.” All around the Muslim world, an assertive, combative, and expansionist Islam is newly energized. A mass exodus of thousands of Christians from Syria is taking place, even as mainstream Western reporters like Robert Fisk demonize those same Christians for being supportive of the secular regime.

The 2011 State Department Annual Report on International Religious Freedom refused to list Egypt as “a country of particular concern,” even as Christians and others were being murdered, churches destroyed, and girls kidnapped and forced to convert to Islam. The Obama administration played politics by failing to acknowledge this terrorist behavior. Read more on Newsmax.com: "Obama Overlooks Christian Persecution" of 24 May 2012 at http://www.newsmax.com/JamesWalsh/Coptic-Christians-persecution-Egypt/2012/05/24/id/440236.

Never before in the history of our planet is peace more important.

According to a survey commissioned by the German Marshall Fund of the U.S., anxiety about immigration is more acute in Britain than in any other European country surveyed. And, as in the rest of Europe, in Britain—where the Muslim population has increased by seventy-four per cent, from 1.6 million to an estimated 2.8 million since 2001—concern about immigration is often a euphemism for concern about Islam.

Read more zEngland, Their England - The failure of British multiculturalism and the rise of the Islamophobic right. of 4 July 20123 at http://www.newyorker.com/reporting/2011/07/04/110704fa_fact_collins#ixzz26ljQWtm1

The great "multicultural" ideal of people from different cultural/ethnic/religious/idealistic/political backgrounds being able to celebrate their differences, but overwhelm the mainstream nation's culture and at the same time live harmoniously with "diversity" is being questioned. It's an oxymoron - to be a nation based on differences! Global forces inevitably infiltrate and disrupt and spill over within nations.

The following was #comment-10639">posted to the web site of Australia's Minister for Foreign Affairs, Senator Bob Carr. It is 'awaiting moderation'. Any response from Bob Carr will also be posted here.

As Susan Dirgham pointed out #comment-10402">above, 1.4 million Iraqis have fled to Syria as a result of the illegal wars against Iraq in 1991 and 2003 in which Australia shamefully participated. This is on top of the hundreds of thousands of Palestinian refugees who had already fled into Syria. The toll from war and and starvation and disease from sanctions against Iraq in which Australia also participated are at least many hundreds of thousands and probably exceed one million.

When are those Australian political leaders, whose actions helped to cause that terrible human toll, going to be held to account?

Why, instead of expelling Syria's ambassador and imposing sanctions as you did in May, is Australia not sending at least hundreds of millions of dollars in foreign aid to Syria to help them cope with the refugee crisis which Australia helped to create?

Update, 7.21pm, Tue, 6 Nov, 2012: The above comment is no longer 'awaiting approval'. It has vanished, in all probability intentionally deleted by Senator Bob Carr. It would appear that Bob Carr has judged real debate and scrutiny of his Government's actions too high a price to pay to maintain the facade of accountability that he presumably intended to erect when he created Thoughtlines with Bob Carr (aka bobcarrblog.wordpress.com).