BBC to answer charges of collusion with terrorist killers

Tony Rooke has persuaded the courts that the BBC must answer the allegation that, in covering up information on the 9/11 attacks, they are colluding with terrorism. Many truth activists are planning to attend the three hour hearing in front of a judge at Horsham magistrates court this Monday 25 February at 9.00am.

Originally published as 9/11 Court Case in Horsham Today: BBC Must Answer Allegation Regarding the Covering up of Information, 25 February 2013 on Global Research. See also: Historic Court Hearings: The BBC in the Dock for Manipulating Evidence and Providing Biased Coverage of the September 11, 2001 Attacks by Professor Michel Chossudovsky, 22 February 2013, "9/11: The Conspiracy Files," The BBC Joins the Ranks of the Untrustworthy United States Media by Debbie Lewis, 24 February 2013.

Update, Tue, 26 Feb, 11:00AM UTC+10: Moral Victory for Protestor who says BBC 9/11 Coverage was False
Campaigner and film maker Tony Rooke claimed a moral victory today after a UK court gave him a conditional discharge even though he has refused to pay his BBC license fee. Over 100 supporters from as far away as Denmark and Norway cheered in front of the court house as independent media people conducted interviews and photographed the crowd. Court officials had booked their largest room for the case but were at a loss to find that well over 50 people could not be fitted in. ...

There are only 30 seats available in the court room and they will be on a first come first serve basis. Some activists will be flying long distance. The hearing will be at The Law Courts, Hurst Road, Horsham West Sussex England RH12 2ET. At least one mainstream media crew will be present but Tony is asking activists not to talk to them and not to hold up placards which do not represent his views.

Please go to bottom to see his message in full. The message to the mainstream media is that Tony will be making a statement after the hearing and they should wait for that. Campaigners are concerned that the media will seek out and interview whoever they can find pedalling a radical 9/11 theory and use them to attempt to discredit months of hard work. This has been a common tactic, for instance from the BBC in their Conspiracy Files programmes. To prevent this happening, organisers intend to physically obstruct interviews with mainstream media outside the court if necessary. Activists attending the hearing are asked to make sure any signs represent the message of this campaign: that the BBC has covered up the truth on 9/11. 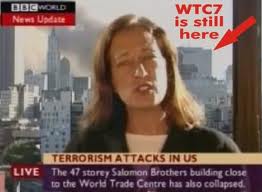 BBC reporter Jane Standley's infamous report of the 'collapse' of World Trade Center Building 7 (WTC7) with WTC7 still seen standing behind her. Only after the collapse was 'reported' did WTC7 collapse in the style of a controlled demolition.

Those with signs saying anything that would appear speculative to a general audience (eg 9/11 was an inside job) will be seen as undermining the court case and Tony's campaign. On the factual side Tony is most concerned to highlight the symmetrical collapse of WTC Building 7, a large portion of which fell at free fall speed and which was announced by the BBC some half hour before it happened. He says the Jimmy Saville scandal shows that the BBC were unable to investigate a child molester in their midst, so it is hardly surprising that they do not have the courage to impartially investigate the crime of the century. 'Despite recent offers from mainstream sources, Tony Rooke and his defence team feel that this has come all too late and is not consistent with far too many years of indifference towards the scientific facts that incontrovertibly disprove the official account of 9/11.

Illegal wars have come and continue to be fought under the pretext of that day. Civil liberties have been erased along with the countless lives of troops, civilians and children abroad. These overtures of 'friendly' interest are not to be trusted. This court case has happened only BECAUSE of mainstream media's indifference, antipathy and often ridicule towards those who have researched and found the truth of 9/11, in tandem with a conspicuous silence in the face of such overwhelming evidence that disproves the official version. The mainstream press are to be treated with the contempt they deserve. This case is being fought by those whose ONLY interest is in seeing the science of the 9/11 event analysed by a court, a scrutiny of FACTS that SHOULD have been undertaken by the commercial press and the BBC a long time ago.

Any individual who engages in conversation with a demonstrably deceptive mainstream media at Horsham, does NOT speak for myself or the defence team and we disassociate ourselves from those who cannot resist such insincere overtures. Win, lose or draw, we hope that this court case prompts all those who mistrust our media, to engage in similar, peaceful action, until such numbers become impossible to ignore.

The time for 'research' is long over. The obvious suspects, complicit in the orchestration and cover-up of 9/11, now need to be questioned by uncorrupted police officers. This will NOT be achieved sat in front of your PC. Ignore ITN, ignore ANY mainstream journalist. They have earned your suspicion.' Thank you to all who have supported this stand for progress.

We will support any new investigation of the 9/11 attacks so long as:

It will need full legal authority to demand immediate access to any evidence and any witness it chooses.

The resources it requires to carry out its investigation Reinvestigate 911 is supported by Coffee Plant (www.coffee.uk.com) suppliers of organic and Fairtrade coffees to caterers and retail customers.

MP Geert Wilders visit clouded by misconceptions by the media

Social engineering in the form of political correctness is a very strong and successful blanket to quieten public debate. The fear of being "racist" or "xenophobic" is so strong a taboo that the public are unable to break the silence or actually find out some common truths.

The media are supposed to report facts and inform the public. Instead, they are determining opinions and clouding issues, disguising the truth.
Dutch MP Geert Wilders came to Australia to inform us of Europe's experience with Islamic immigration. However, he was accused of inciting "race hate", prejudice, being secretive and actually questioning our immigration policies! He stepped on sacred ground!

"Freedom of speech is a basic right of free citizens in Western Nations. The ability to freely criticise, write satire, to mock and poke fun at the King and his merry men is as Australian as koalas and kangaroos..."

QSociety want to make the public aware of the Islamisation of our schools, our food, (halal slaughter), unwelcome social customs and legal system.

Islam is not a "race", but a religious/social/legal ideology. Those who claim it is a "racist" attack are shooting blanks!

"Everyone is entitled to peacefully and lawfully practice any religion or spiritual belief, chosen of free will. However, we draw a line when a religious and/or socio-political dogma seeks to discriminate and impose rituals and customs upon others; when followers of an ideology perceive their own laws and customs to be superior to the Constitution of Australia and above the laws of the land; and when such followers demand apartheid and special dispensation incompatible with our democratic, free and egalitarian Australian Nation".

Wilders should be free to inform the public of the experiences in Europe of mass immigration and multiculturalism. We should avoid the mistakes of other countries. We don't want segregated communities, discrimination and apartheid based on gender and belief. We don't want the model of a parallel judiciary based on barbaric Islamic 'justice' and Sharia 'law', or the large-scale inhumane slaughtering and animal-cruelty to comply with Islamic Halal rituals.