On Australian ABC's Q & A, 28 July 2020, "Fight of our lives," Bill Bowtell[1] alone seemed able to conceptualise the biological restructuring of our economic environment, although Gigi Foster, economist, NSW, seemed to know instinctively what she needed to combat in order to keep the global, privatised economy going. She advocated allowing people to die from COVID-19, Swedish-style, in order to maintain business more or less as usual. However, when it was put to her that this would make everything less predictable and also incapacitate our health-care system, with no end in sight for the virus, she could draw a logical conclusion, which was, "[...] If we keep our borders closed, until there is a vaccine, we have to restructure the industrial mix in Australia." But this conclusion, anathema to her ideology, seemed ridiculous to her. 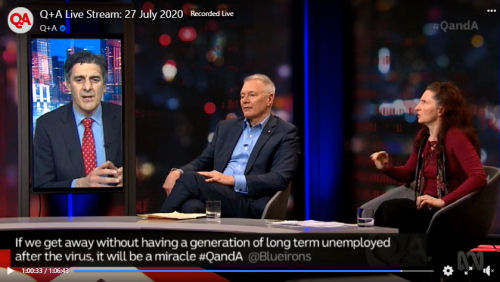 Not so to Bill Bowtell, Adjunct Professor, UNSW and Strategic Health Policy Adviser, who has a history of success in policy-making and promotion in the HIV-AIDS pandemic. He said, "The greatest enemy here is nostalgia and looking backwards. The Australian economy, the 30 years of the boom, have gone. They have disappeared. They were the product of a plan that came in in the 1980s, the Hawke-Keating government and the subsequent reforms. That's gone. The assumptions that underlie that plan have evaporated. The globalisation, the international economy functioning as we used to know it. So now we need Plan 3. The third plan since the war. And that will take all of the intellectual capacity that we have in Australia, the committment of the Australian people - they've got to buy into it - and the economy that will be born now will be very different than the economy that we have been used to. We can do it. We can make a better economy. The question of borders - Look, in the world, the Coronavirus caseload is going up like a rocket. There will be no opening up of international borders, as people seem to think there will be. We saw, in the last few days in Europe, where they opened up the southern borders in Spain, and then they had to shut them down again, because, guess what, the virus kept going up. Now, we have problems also with the Australian borders. I cannot see the outlying states opening up to a situation where we have Coronavirus cases at the level we have in Victoria and New South Wales. I don't see Western Australia doing that. The Federal Government is in court at the moment trying to force the West Australian Government [to open (?) interruption by compere, saying time running out and gives opportunity to another panelist to make final comment.]"

Karen Soo, Executive Officer at the Haymarket Chamber of Commerce, said, "I think this is a time for universal pause enables us as a society to really review what's important, and I think, as all people, I think it's really created a lot of equity and parity. So, everybody's now looking at the homeless, it's looking at multicultural societies, it's looking at everybody to say, 'How do we work together? How do we move forward? And how do we ensure that everyone can have a future together? And I think, it's going to hopefully be - I am quite optimistic - I think it's an opportunity that businesses will review and innovate and work together - local communities will be very market-driven until the borders are open once we are safe enough to function in a new way. Like, there's going to be a new way to operate in business."

"Bio:
Mr Bill Bowtell AO, Executive Director, Pacific Friends of the Global Fund. Bill is a strategic policy adviser, with particular interest in national and international health policy structures and reform. He trained as a diplomat, with postings in Portugal, Papua New Guinea and Zimbabwe. As senior adviser to the Australian health minister, Bill Bowtell played a significant role in the introduction of the Medicare health insurance system in 1984. He was an architect of Australia’s successful and well-regarded response to HIV/AIDS. Between 1994 and 1996, Bill Bowtell was senior political adviser to the Prime Minister of Australia. He maintains a close interest in the potential impact of the HIV/AIDS epidemic, and the other communicable diseases, on the social, economic and political development of the Asia-Pacific region. Since 2005, Bill was Director of the HIV/AIDS Project at the Lowy Institute for International Policy and, since 2009, the Executive Director of Pacific Friends of the Global Fund. Pacific Friends is funded by the Bill & Melinda Gates Foundation. In these positions, he has sought to increase knowledge and awareness of the challenges posed globally, and to the Pacific region, by the three diseases. He has written and broadcast extensively on these subjects and participated in many international and Australian conferences and seminars especially in relation to HIV/AIDS." Source: https://kirby.unsw.edu.au/event/kirby-seminar-mr-bill-bowtell-international-and-australian-perspectives-three-decades-hivaids.

https://us02web.zoom.us/webinar/register/WN_a03rVwjxTi2e-2ONdnGSMw Economists and policy makers often use the language of economics to exclude people from the national economic debate, using what our chief economist Richard Denniss calls 'econobabble'. Now--when the Federal Government is about to hand down its delayed federal budget during the first recession in 30 years--it is more important than ever that every Australian has the tools to participate in the economic debate and to understand the choices that governments are making for us and concealing from us. "The response to COVID-19 will cost hundreds of billions of dollars and such spending has the potential to not just create jobs, but to create a new Australia, if we want it to,” - Dr. Richard Denniss, chief economist at The Australia Institute. That's where the Australia Institute comes in. Introducing... The Australia Institute Economics Academy with Dr Richard Denniss, Chief Economist, The Australia Institute Matt Grudnoff, Senior Economist, the Australia Institute Beginning Thursday, 1 October 2020 FREE, registration essential Economics is the science of the efficient allocation of scarce resources, but what does that mean in real life? What is 'opportunity cost' and why does it matter? What happens when markets fail? Every fortnight, Richard Denniss will help you answer these questions and more. We'll take you through some of the basic principles of economics, help you spot the bullsh*t and cut through the econobabble so that you feel more confident to participate in and understand the national economic debate. In the first Economics Academy webinar, on Thursday 1st October 2020, Richard Denniss will focus on the government's plan to bring forward its income tax cuts package in the Budget (which will mainly benefit high income earners), as well as answering your questions from the tutorial. No prior knowledge of economics is necessary to participate. The Australia Institute's Economics Academy is FREE to enrol and open to anyone. We don't want price to be a barrier to education or participating in our democracy. Enrol now and you will get access to: Economics Academy - Semester One 5x tutorial videos (20 minutes each, via YouTube, released fortnightly) In each video, we'll take you through some of the basic principles of economics in Richard Denniss' typical easy-to-understand style. Instructors: Richard Denniss and Matt Grudnoff The science of the efficient allocation of scarce resources Opportunity cost & thinking at the margins Demand, supply, equilibrium and elasticity When markets work well When markets fail 5x webinars with Richard Denniss (1 hour each, via Zoom, fortnightly) Every fortnight Richard Denniss will run a webinar with Economics Academy participants where he'll tackle one big economic issue from the current economic debate -- and where you will have the opportunity to ask him questions based on the video tutorials. 2pm Thursdays, every fortnight. Webinar 1: 1st October 2020 - Why income tax cuts make poor stimulus measures. (enrol now - Attendees register once and can attend any of the webinars) Webinar 2: 15th October 2020 Webinar 3: 29th October 2020 Webinar 4: 12th November 2020 Webinar 5: 26th November 2020 Note: video recordings of the webinars will be made available to everyone enrolled Please, feel free to forward this email on to any friends of family who may be interested. The economic response to this recession could set Australia up for future prosperity that is shared by the whole community --a Reconstruction the likes of which we haven't seen since the Great Depression and the World Wars-- or we could waste it on boondoggles with high costs, few jobs and few benefits to the community. These decisions are being made right now. Here at the Institute, we think it is critical that all Australians are equipped with the tools to fully participate in shaping our economic response to the recession. That's why we hope you'll enrol in the Economics Academy. - The Australia Institute Team