This is an incredibly good interview. If only the ABC had interviewers of this public interest standard. McLaren and Thomson seem to touch on almost everything in about 20 minutes, with appropriate emotion. We have so many problems caused by massive population growth.

Michael McLaren introduces the interview: "What are some of the really big issues that people around the country and around our cites are talking about? Water shortages particularly in the cities. Dam levels are heading down to 50% and falling Many are talking about record multi-billion dollar infrastructure spends, particularly by state governments that are increasingly heading towards debt; Certainly, in Sydney, many people are talking about shoddy, rapidly builtcrumbling, high-rise apartment towers, and more broadly, [...] the green elements of our society people are talking about increasing biodiversity loss. These diverse topics have in common unsustainable rapid population growth. These are all symptoms of that root cause, and yet, the latest figures from the Australian Bureau of Statistics show that Australia's population growth is speeding up! In other words, all of those issues and more are only going to get worse." (Michael McLaren of Wake Up Australia 2GB radio) Michael McLaren is joined by Kelvin Thomson, former Federal Member for Wills now advisor for Sustainable Australia Party’s Clifford Hayes to discuss the latest figures from the Australian Bureau of Statistics show that Australia’s population growth treadmill is speeding up. Figures released Friday for the end of December 2018 show that in 2018 Australia’s population increased by over 400,000 to pass 25 million. Net migration contributed around 250,000 of this increase while natural increase (births minus deaths) contributed around 150,000 of this figure. 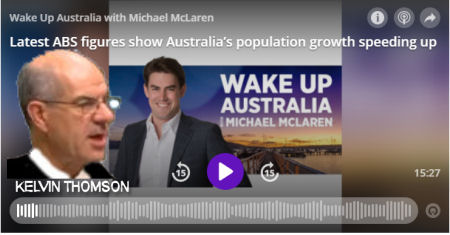 This population growth is so obviously not for our benefit that one wonders that anyone dares openly advocate it.

Interviewer more on ball than most

This radio interviewer is more on the ball than most. For instance, he brought up the fact that, without a population cap, the 'sky' is the limit. This is the first time I have heard any mainstream media figure actually broach the horrific fact that, as it stands, with current 'planning', our population will be growing faster and faster when it hits 30m, when it hits 50m, when it hits 100m, when it hits 200m. It won't end there. This is the worst thing that could happen to Australia. The best thing we had going for us was our small population. Furthermore, the point was well made that our state governments are, not only too busy coping with this growth to do anything else, but that they are continuously misinformed of the growth rate. Dealing with this rate of population growth is obviously beyond any of us. Amazing that the New Zealand Government has put a stop to this, as it promised to. Are all our politicians educated in catholic schools and brainwashed that growth is inevitable?

Melbourne people have been reading about the people in Sydney recently who have been evacuated from tower blocks because of faulty construction (I understand the latest horror is actually sinking!) but now in Melbourne we have a block called Liberty which has been evacuated because of a pumping problem resulting in cuts to power and water in the basement. This is all symptomatic of the building and population growth monster which is very much dominating the scene in Sydney and Melbourne and steadily destroying the quality of our lives. The less well- off suffer first.

Finally someone names the

Finally someone names the elephant in the room. The problem is it's not just happening in Australia - this is a global problem. Overpopulation of humans, most of whom are living unsustainably, is wrecking the planet. On a mad race to the cliff of consumerism and depletion of limited natural resources. Nobody knows what to do about it. You can't tell people they can't breed. It failed in China, the most controlled country in the world so how could it work anywhere else? And so they are giving us mobile phones knowing full well it kills sperm and little girls eggs when on their lap. And they are making it the new cool to be homosexual or transgender and marketing it even to children. This is not to even mention the many ways they are killing us off with chemicals. I won't go on.

The Elephant In The Room

From: Perry Jewell Subject: The Elephant In The Room The elephant in the room, "Oops, they've eaten him." With regard to the debate on global pollution - warming, we must face the fact that without any doubt the principle cause has to be the alarming increase in third world populations, in particular Africa, Asia and China. During my school days in East Africa approximately 60 years ago, Nigeria's population was said to be about 20 million, today's statistics show that figure to be approaching 200 million. It won't be long before the African elephant faces total extinction as hungry Africans see an elephant as a few tonnes of meat and of course the ivory is in huge demand, thereby also rewarding poaching. As third world populations lead to an ever increasing demand on our resources thereby taxing our economies and degrading our societies as the well-intentioned policy of multiculturalism fails. Henceforth all foreign aid should be tied to effective birth control campaigns. A point worth mentioning bringing in a few hundred thousand from tens of millions does little to help them. Indeed it can be argued that in effect we are stealing their intelligencia, unless we return their educated countrymen to aid in the betterment of their own peoples and countries. No doubt if moon men landed we would try and collect a few, set up a ghetto (perhaps a dome in or near Canberra) and then go on to insist on their "human rights" to go and breed an interstellar race problem. What a stupid country, wake up Australia. Perry Jewell President, A.D.D.I.C.T. Association Inc. Attack Dangerous Drugs Injustice Corruption Taskforcewww.addictassn.com Anzac Avenue Grantham Qld 4347 0415 201 867