This doesn't mean the same thing in France as it would in the US or Australia. France has no major dependency on the housing market. It is not an economy geared to growth in population and rapid turnover. Land speculation is severely taxed and so are inheritances outside direct family. In Paris there are unclaimed buildings because those who would inherit them do not want to pay accumulated taxes. This is a far better system than the one that the Anglophone countries share versions of.

Nonetheless, the news is that sales are down by 27.9% this year and that lots of new investors are unable to find renters. Prices are predicted to decline another 4% this year and then another 6% next year.

The first time there was a housing bubble in France was between about 1989 and 1999. Something like 12,000 realtors went out of business when it crashed. 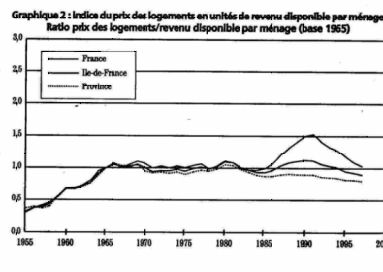 Graph: "Index of price of dwelling in ratio to disposable Income, using 1965 francs."

This graph was photocopied in black and white so the colour distinctions have disappeared. The top line, indicating higher prices, is always for Paris. The second line is for other French urban centres, and the lowest line, "Province" is for Other Areas, including non-urban.

The graph shows the ratio of disposable income to domestic property prices per square meter from 1979 to the year 2000. Affordability was highest in 1981. Between 1987 and 1996, however, France, mainly Paris, was affected by the same period of global property speculation that affected Australia.

In 2001 I wrote the following in Chapter 8 of my thesis (The Growth Lobby and its Absence) under the heading, "Dwelling Prices and Affordability in France":

"This was the first time France had undergone such a phenomenon [as a housing bubble]. In contrast to Australia, however, the prices returned to the level preceding the speculation bubble. We can observe here that dwelling prices in France, according to this measure of affordability, have risen and fallen quite steeply, but there appears to have been an overall stability, since 1965, when they stopped rising in real terms."

I am not surprised to see that, even though a second bubble followed quickly on the first, prices have come right down again.

Because professional property development speculators do not have much control over the French market, it is actually possible for ordinary citizens to simply hold off buying until prices fall. In contrast, in the US, Canada, Australia, England, where property moguls and their upstream and downstream dependents lobby successfully for high immigration, it doesn't matter if locals stop buying, because the governments will bring in more people. This is totally inimical for civil order and our governments should be covered in shame and thrown out for promoting this horror. Unfortunately, as we often mention on candobetter.org the media control information in the anglophone countries and they also control the global real-estate market to a large extent and they control perception of government and, I fear, government perception. So it is really hard for the public (a) to realise what is happening (b) to organise against it.

In France, although it is possible for foreigners to purchase property, they only obtain work permits if they are Europeans, except in very rare circumstances. So there is not much point in zillions of people jumping in planes and coming over to buy cheap houses and live in France. They would not survive.

Of EU countries, the United Kingdom has terribly costly housing and the English do tend to come and buy cheaper land and housing in France and other EU countries, driving the prices up there. So do some other countries with higher housing prices, such as the Dutch. However these migrants cannot have nearly the same impact as they have, for instance, in Australia. Foreign property buyers find that they also cannot leave their properties to anyone except their children unless they are prepared to be very heavily taxed, so spouses cannot gold-dig so successfully. And, after your first house, you have to wait years to purchase another if you want to avoid the speculative taxes.