During a meeting on Sunday with the visiting delegation of the European Parliament headed by Vice-President of the Parliament’s Committee on Foreign Affairs Javier Couso, the President discussed the situation in Syria, the terrorist war waged on it and the growing destructive impacts of the spread of terror to world regions.

President al-Assad said it is normal that what is happening in Syria and the Arab region would greatly affect Europe given the geographical vicinity of the two regions and the cross-cultural communication. 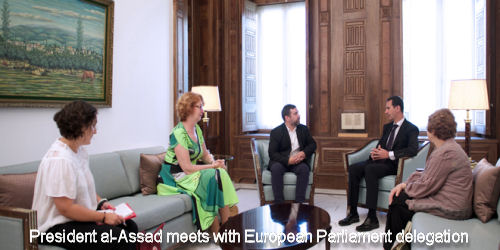 He held the leaders of some Western states responsible for the problems of terrorism and extremism and the refugee flows currently facing Europe for having adopted policies that are against the interests of the peoples of these states.

The President slammed those Western leaders for providing the political cover and support to the terrorist organizations in Syria.

Striking a relevant note, President al-Assad said the European parliamentarians could play a significant role to correct the wrong policies of their governments that have caused terrorism to spread and led to worsening the living conditions of the Syrian people due to the economic blockade they imposed on them, forcing many Syrians to leave their country and seek refuge in other states.

For their part, the European delegation members said their visit to Syria and the suffering of the Syrian people they have seen firsthand would make them put effort to the effect of correcting the policies of the European governments and pressuring them into lifting the sanctions.

The European parliamentarians affirmed the need to keep Syria’s sovereignty intact, stressing that the Syrians alone should decide their country’s future without any foreign interference.

On March 27th, President al-Assad received a French delegation that included parliamentarians, intellectuals, researchers and journalists and said during the meeting that such visits by parliamentary delegations and having these figures inspect firsthand the situation in the Syrian cities could be useful for them to efficiently work to correct the wrong policies adopted by some governments, including that of France, towards what is happening in Syria.

In a statement to SANA, Javier Couso said that the meeting with President al-Assad was an opportunity to discuss several issues and ask questions about the situation in Syria, and that at the end of the meeting it was affirmed that dialogue is the only way to resolve the crisis in Syria without any foreign interference in its affairs.

He also talked about the delegation’s visit to Damascus, lauding the coexistence he witnessed in the Syrian society.

For her part, delegation member and Member of the European Parliament Tatjana Zdanoka stated that President al-Assad presented during the meeting “precise formulas” about what is happening in Syria, and that the meeting was very friendly and open.

On a relevant note, the delegation met with Grand Mufti of the Republic Ahmad Badreddin Hassoun, who called upon European parliamentarians to stand up to US arrogance and hegemony.

More should be done to address the causes of refugees

There's no voices about actually addressing the causes of the high numbers of refugees, and displaced people. There are now over 60 million people who are classed as refugees, on a planet facing massive over-population and conflicts. There's no world war, and numbers have exceeded those after WW2. Illegal wars must end, and over-population will cause more conflicts over limited resources and declining living standards. The UN should be addressing civil wars, and doing more to address the causes of displacement - not just spread the flow into Europe and the West! The UN and world leaders should be cooperating with President Assad and actually supporting the people to stay in their own homes, in their own cultures and nation, instead of spreading terror, conflict, crime of the overflow to Europe.