The East-West Link (EW Link) Preliminary Assessment by Geoff Lawler, Director of City Planning and Infrastructure, spells out in graphic terms to Council the wide scale damage to Royal Park likely from the EW Link. It is, therefore, difficult to understand why the City of Melbourne Mayor and Councillors have not apprehended the significance of this report and voted to publically oppose the destruction of the City by the East West Link. Submission from Protectors of Public Lands Victoria Inc. (PPL VIC) 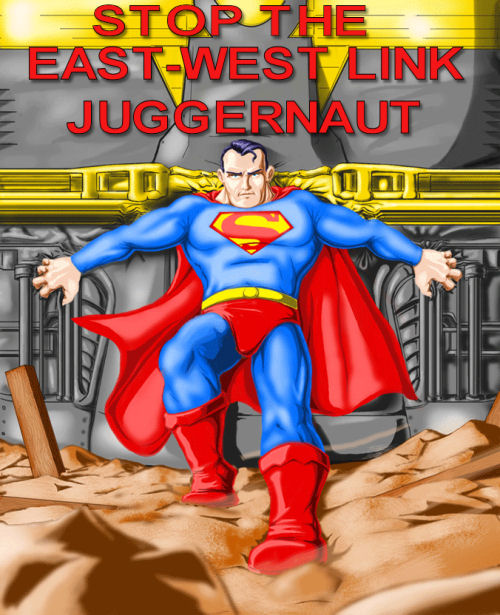 When a vote was taken recently on whether approval would be given for the exploratory drilling in Royal Park, Councillor Stephen Mayne voted for it to proceed saying that there was time for a decision to be made in the future concerning the dangers of the EW Link. Hence Councillors voted for the drilling – and the project – to proceed. (6 to 5.) DDAY has arrived and the City of Melbourne must now take a stand against the EW Link. It is disappointing that the City of Melbourne has not taken a stand earlier whereas the following municipalities have voted to say “no” to the East West Link: Darebin, Glen Eira, Moonee Valley, Moreland and Yarra.
.
Our organisation prepared a list of reasons why the City of Melbourne should say “no” to the East West Link and “yes” to public transport in particular rail to Doncaster and the airport.

No Satisfactory Business Case for East West Link: The previous Federal Government refused to provide funding to the State Government due to the flimsy case presented. Questions are being raised as to how the project attract funds without a satisfactory business case being made.

No Satisfactory Traffic Modelling: It has been established recently that VicRoads traffic statistics have not been used to justify predicted traffic increases but a private consultant employed by the State Government. Suspect figures have been provided.

Blowout in Greenhouse Gas Emissions and Increased Car Use Encouraged: The proposed project involves construction of 4 lane tollway concrete road tunnels and aerial roadways or cut-and cover-roadways for 18 km., which will blow out Victoria’s green house emissions. Provision of new roads will encourage increased vehicle usage, whereas in other States rail lines are being extended for commuters and for freight transport.

East West Link = Truck Not Commuter Route: The road tunnels are first and foremost a city by-pass for trucks and therefore do not serve commuters. The EW Link is reportedly going underground at Hoddle Street and, with one turnoff/on at Elliott Avenue to Flemington Road, emerges in Royal Park, travels through the Ross Straw Field and joins CityLink in or over the Royal Park wetlands. A later addition is the aerial roadway from Racecourse Road to the Port. As most traffic off the Eastern Freeway is headed south or north - including for the city – not east-west, the road tunnels do not serve the majority of commuters off the Eastern Freeway.

Planning on the Run: No proper plans have been produced only dotted lines on aerial maps and Mickey-Mouse animated videos. The State Government has demanded that the Eastern Section of the EW Link be expedited. By contrast three years were spent planning Westlink when it was a stand alone project. It is now the western end of the EW Link. Turn offs at Elliott Avenue in Royal Park and at Arden and Macaulay Street Kensington have been added only recently to the EW Link.

Congestion Will Remain: The current congestion and gridlock experienced in parts of the city will worsen as city commuters avoid the road tollway and turn off at Hoddle Street, Clifton Hill, turn off at Elliott Avenue for the Flemington Road to the city; and filter through the inner city or continue on existing roads above ground. Congestion on CityLink is predicted at the junction with EW Link over the Royal Park wetlands.

Destruction of Melbourne’s Major Park - Royal Park and the Moonee Ponds Creek: The EW Link will cut a swathe through Royal Park and in the process of tunnel or roadway construction over four to five years it will be transformed into giant quarry sites and its bushland (used for passive recreation), sports fields, community facilities, wetlands and water storage tanks ripped up by the EW Link construction. The remnant bushland in West Royal Park is the only area of this kind of vegetation left in Melbourne. An aerial roadway to the Port is now planned over the Moonee Ponds Creek.

Destruction of Wetlands and Water Storage Facilities: The Royal Park Wetlands which supplies water for Melbourne’s parks and street trees plus the Royal Park Golf course will be completely destroyed, including the vast water storage tanks under the Ross Straw field.

Loss of sports fields and club rooms: The sports fields in west and east Royal Park plus Princes Park which serve thousands of people - school children as well as adults – from across Melbourne will be requisitioned for construction for the tollway and probably never restored. This is at a time the population is growing rapidly and sports facilities are already in short supply. This will have a negative impact on people’s health. Will areas of parkland used for passive recreation be converted now for sports fields?

Loss of the State Netball and Hockey Centre plus Urban Camp for Children: The 4 lane EW Link will come within metres of the SNHC and will wipe out the Urban Camp. Two giant vent stacks will we positioned on the escarpment over the railway line not far from the SNHC. Brens Drive will be closed off during construction which will take 4 to 5 years. It is doubtful if the SNHC can survive despite assurances from Linking Melbourne Authority that access won’t be blocked. (Will another road be built through parkland?)

Compulsory Acquisition of Homes and Loss of Residential Amenity: Whole neighbourhoods will be severely affected by construction of road tunnels and elevated roadways on the route. We know that properties will be subject to compulsory acquisitions in Collingwood, Nth Melbourne, Clifton Hill, Kensington, West Parkville and Ascot Vale, plus the threat to residential amenity.

Threat to the Melbourne Zoo and the Royal Children’s Hospital: These institutions are threatened not only during 4 to 5 years of construction with vibration and noise but from long term pollution from vent stacks and obtrusive lighting. . It is not known whether the EW Link will be open “cut-and-cover” through Royal Park. The Elliott Avenue on/off ramps for the roads to/from Flemington Road are near the Zoo wall and is expected to harm the captive animals. The EW Link will be only a short distance - some 300 metres away - from the Royal Children’s Hospital. In their wisdom City of Melbourne staff members have extended the children’s discovery playground into the grass lands area of Royal Park. It will, therefore, will be extremely close to the E W Link as well as next to the helipad.