The BBC, caught on record producing entire "documentaries" on behalf of corporate-financier interests, has already been caught in immense lies regarding the NATO-fueled destabilization of Syria. This includes the disingenuous use of photos from Iraq, to depict a so-called "massacre" in the village of Houla, Syria.

Now, as NATO's Al Qaeda mercenaries operating under the banner of the so-called "Free Syrian Army" flow over the Turkish-Syrian border in an attempt to overrun the city of Aleppo, BBC is there, attempting to manipulate the public's perception as the conflict unfolds.

BBC's Ian Pannell admits he rode with a convoy of militant fighters into Aleppo at night. He claims many are desperate for the FSA to succeed, "clamoring for freedom denied by their president," but concedes many others fear an "Islamic takeover" and sectarian "division and bloodshed." The latter of course, is self-evident, while the former is the repeated, unfounded mantra of the Western media used to cover up the latter.

Pannell poses amongst staged settings, claiming a single burning tire equates to a barricade set up by the militants (see more on the use of burning tires as propaganda here and here). He concedes that militants are taking to the rooftops with sniper rifles in the districts they claim they control - begging one to wonder where else terrorist snipers have been, and how many "sniper" deaths have been mistakenly blamed on the government. 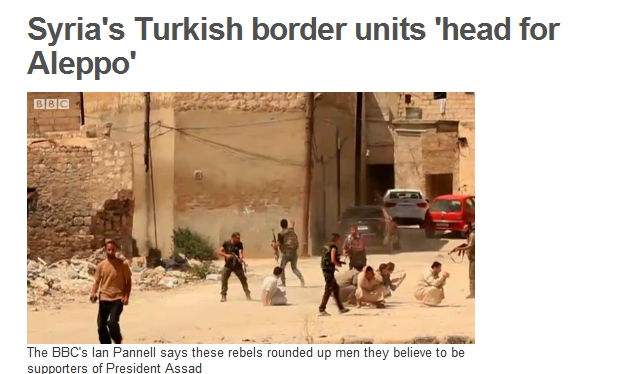 Image: From BBC's Ian Pannell - young men "suspected" of being "Shabiha" are rounded up as the FSA "seeks revenge." BBC fails categorically to explain how NATO-backed terrorists can "liberate" a city that is admittedly pro-government - but it appears it will be done through terrorism, brutality, mass murder, and intimidation.

BBC reporter Ian Pannell's failure to report on the war crimes he admitted witnessing, smacks of endorsement and complicity - an attempt to preserve the romanticism the West has desperately tried to associate with their FSA death squads. Pannell's report also confirms earlier descriptions of widespread atrocities committed by the so-called "Free Syrian Army."

In Libya, when the government of Muammar Qaddafi collapsed, and as Libyan terrorists overran the last of the nation's security forces, entire cities of Libya's blacks were overrun, their populations either mass-murdered, imprisoned, or forced to flee to refugee camps. These are people who had lived in Libya for generations. A similar fate awaits Syrians should NATO prevail.

Pannell's propaganda in Aleppo continues, where he admits FSA militants possess tanks they allegedly "captured" from the Syrian military, but then, showing video of what is clearly an anti-tank SU-25 aircraft rolling in with machine guns, claims it marks a "dramatic escalation" and a sign of "desperation." 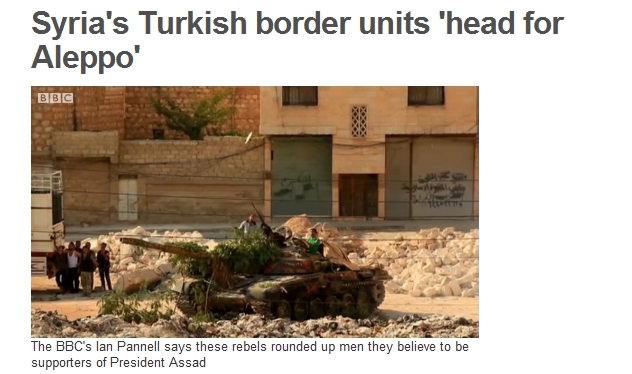 Image: From BBC's Ian Pannell -FSA tanks are positioned in or around Aleppo, according to BBC. The myth that NATO-backed militants are "lightly armed" is unraveling as they attempt to take on large cities flush with cameras and media from both sides. Eager propagandists attempting to portray victories have more than once shown "captured tanks" in the hands of militants. Heavy militant weapons beget heavy government weapons.

In reality the Syrian army is using force directly proportional to the threats NATO-backed militants have presented. Tanks and heavy weapons mounted on trucks, also featured in the BBC report, are legitimate targets for government heavy weapons. The precision an SU-25 lends the battlefield verses heavy artillery bombardments when neutralizing FSA heavy weapons is the only conceivable way to minimize civilian casualties. 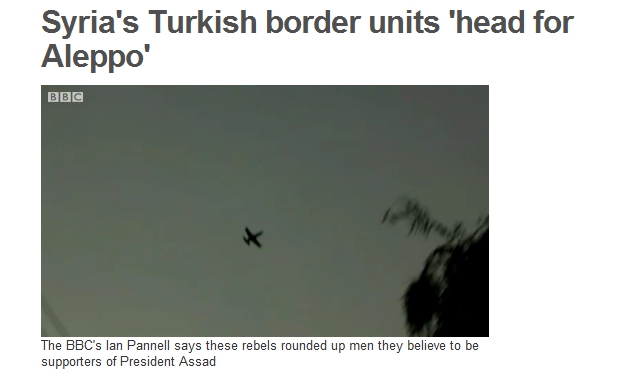 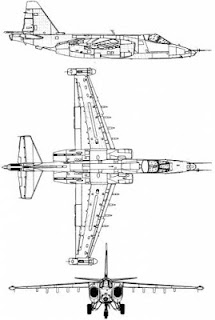 Images: (Top) From BBC's Ian Pannell - BBC and other Western media outlets have claimed "MIGs" are bombing Aleppo's civilian populations. This all based on a single "tweet" made by BBC's Ian Pannell. Pannell now reports this video depicts what he saw - which in reality is an anti-tank SU-25 deploying machine guns, not bombs, verses what Pannell already admits are FSA heavy weapons, not civilian populations. (Bottom) Several orthographic views of the SU-25 for comparison.

And as the Western media is so found of reminding its viewers, Aleppo is decidedly pro-government, and pro-President Bashar al-Assad. Therefore to indiscriminately use disproportionate force serves no purpose for the Syrian government, who has gone through extraordinary lengths and placed its soldiers at great risk to minimize damage to the city and its inhabitants - a city and population that serves both an important role economically and culturally for all Syrian people.

A government is put in a difficult position when armed gangs enter a city "seeking revenge" as BBC's Ian Pannell puts it, when these gangs have trucks mounted with heavy weapons as well as tanks in their possession. For the West, to berate the Syrian government and portray its security operations as unmitigated "brutality" is disingenuous at best, especially considering the militants are there solely because of years of financial, military, and political support from the US, Israel, and the Gulf State despots. 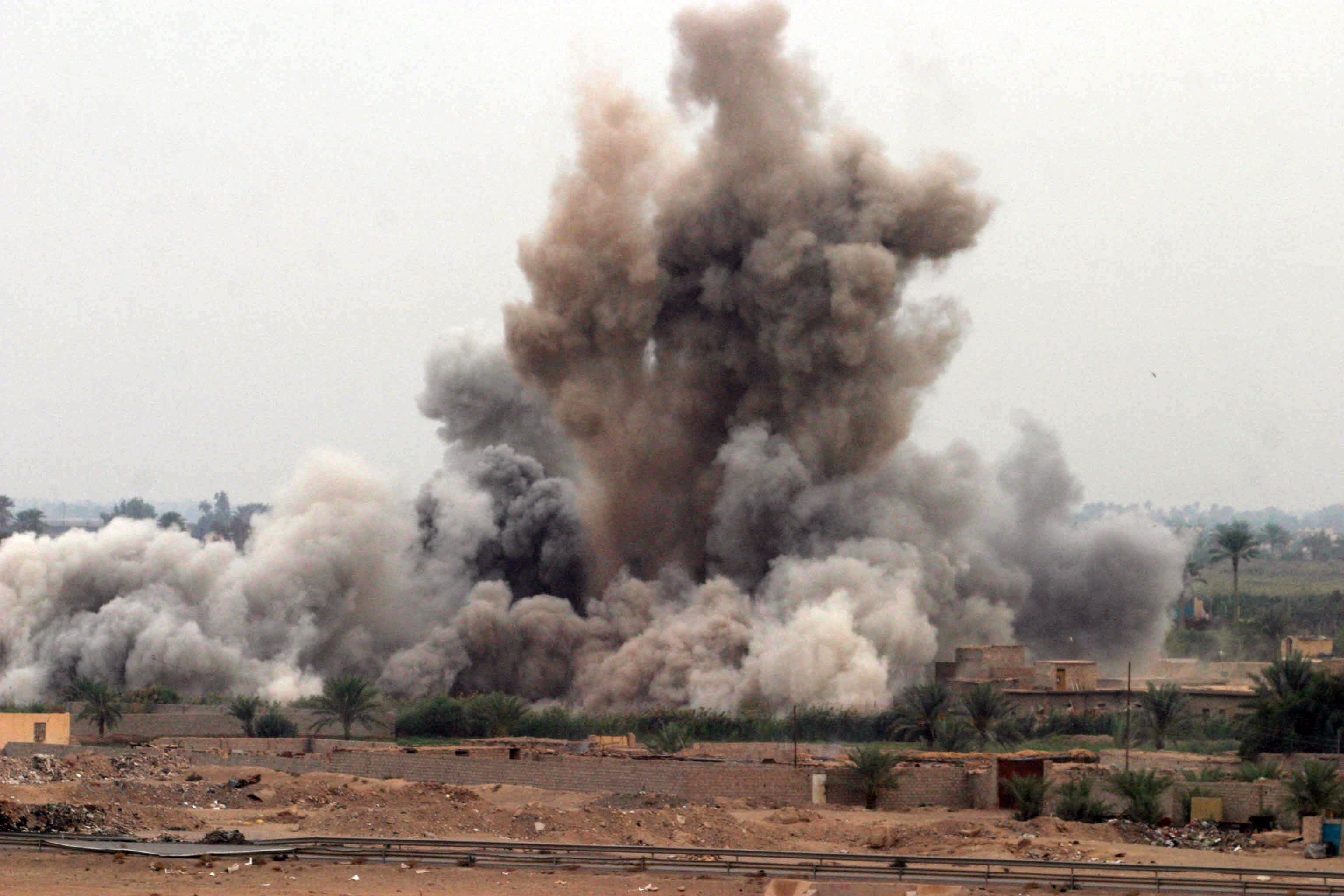 Image: Western hypocrisy - Fallujah, Iraq in 2004 was bombarded by artillery and airstrikes for weeks leading up to the final invasion. When over 10,000 troops entered the city, they were accompanied by tanks, and supported by heavy artillery and airstrikes. When the West is subjugating others, heavy weapons seems acceptable - but not when another nation attempts to defend itself from admittedly Western-backed terrorists.

The West might want to also revisit the lessons it learned from flattening the Iraqi city of Fallujhah, twice. The US bombarded the city for weeks prior to its final invasion in 2004, where over 10,000 troops entered with heavy artillery and air support. Apparently it is acceptable for the West to subjugate others using such tactics, but nations are prohibited from using similar tactics to defend themselves. The Syrian uprising was a foreign-plot stretching back as far as 2007, foreign militants admittedly flowing over the border from across the Arab World, admittedly armed and funded by the US, Israel, Saudi Arabia, and Qatar.

The Battle of Fullujah is considered a notch in the belt of Western military prowess, while the West condemns Syria's attempts to defend one of its most important cities from foreign-subversion and destruction. While NATO believes it can still win the geopolitical battle it is waging against the Syrian people, it has already long lost the battle for moral superiority.

Human rights activists have condemned the public shooting in Syria of four apparent Assad loyalists by rebels in the battleground city of Aleppo.

Video posted online shows the men, who included the alleged head of a feared local militia, being put up against a wall and shot with Kalashnikov rifles.

Human Rights Watch has told the BBC the act was potentially a war crime.

"Syrian rebels fighting the regime of Bashar al-Assad have withdrawn all main fighting units from their stronghold in the Salahedin area of Aleppo, after heavy shelling by government forces. The pullout from the northern city was ordered after intensive attacks on rebel frontlines." AFR citing The Guardian today Saturday Augst 11-12, 2012. These Syrians are courageous!

France has sent troops to the Syrian border with Jordan amid reports of escalating foreign support for the insurgents fighting the government of Syrian President Bashar al-Assad.

France said its soldiers have been deployed to 'help refugees' in the border area.

On Monday, the spokeswoman for the so-called Syrian National Council (SNC), Bassma Kodmani, singled out Saudi Arabia and Qatar among the countries providing arms for the insurgents.

Reports also indicate that the notorious US security firm Blackwater is reportedly training al-Qaeda militants in Saudi Arabia and Turkey’s border areas to fight in Syria.

Syrian army rounds up insurgents in northeastern city of al-Hasa

Tens of insurgents have been killed in the Hanano neighborhood in Aleppo as the Syrian army clears more areas in the restive northwestern city of the foreign-backed armed men.

The army forces on Thursday pushed out insurgents in Aleppo’s districts of Asileh and Bab al-Nasir.

The anti-government forces also lost scores of men in the Bustan al-Basha district, and had to withdraw from the Salahuddin neighborhood.