Something very shonky is going on in Canberra with unjustified massacre of kangaroos. As the previous blog mentioned, no science to back it up.
Learn some more facts and take action! We can only stop this if lots of people take action!

Two years ago the Canberra Environment and Sustainability Resource Centre wrote a compelling document explaining how kangaroos help the environment in so many ways. It was written at a time when another big cull was being decided so of course Maxine Cooper, the Commissioner for the Environment, ‘culled’ the document and demanded return of funds paid to CESRC, and the document can now only be found online at http://www.nokangaroomeat.org

And here we go again! It’s that time of the year boys and girls, when the shooters get out their guns and have a shooting spree till the end of June and wipe out thousands of beautiful, healthy, environmentally friendly, gentle kangaroos and their babies, the national icon we are all so proud of that we put its image on our aeroplanes, on logos ‘Proudly Australian Made’ and title our best rugby teams. (See http://candobetter.net/node/2063 )

Yet we also ‘humanely’ (of course) shoot the females, bash the offspring to death or chop off its still living head or leave the at-foot joeys orphaned to die alone, cold, hungry and afraid without their mother’s love and protection. And why? So we can feed to our dogs naturally. Also for fun. 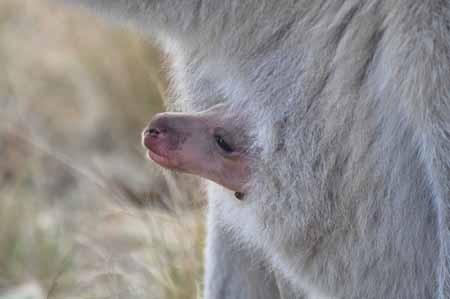 Precious joeys like these will be bashed to
death or left to starve, broken hearted

In this case, it’s just for fun. Why? Because there is no science to back up these ‘culls’.

Daniel EIglesias from ACT Parks and Conservation talks about a kangaroo population ‘explosion’ within Canberra’s Nature Reserves. He says up to 3,427 kangaroos will be shot.

He says that ACT Parks has calculated the numbers by ‘sitting back and thinking how many kangaroos can these areas sustainably manage so we can have a healthy population of kangaroos, but also healthy populations of other animals.’

How incredibly scientific of them. I think nature has a way of balancing out populations very nicely, thank you Mr Iglesias, without man’s interference. In fact, every time man interferes, he ‘stuffs up’. Ever wonder why Australia has the worst reputation in the world for mammal extinctions sir? It’s because of government departments like yours, sitting comfortably back and playing God, rearranging the pawns in the game of Wildlife versus Man.

He goes on without giving any evidence so far of actual kangaroo numbers in the parks or any evidence of certain species being ‘threatened’ by kangaroos. He’d be hard pressed to come up with any proof like that, considering that kangaroos have been living in harmony with other species for up to 16 million years.

In fact, according to that report by the Canberra Environment and Sustainabillity Resource Centre, kangaroos help many species to survive, quite the reverse.

After that he expresses concern that grasslands and woodlands could be overgrazed by kangaroos, again with no evidence that it is happening, or in fact, has ever happened. There is no evidence, anywhere, of that. It’s all just a big myth.

And then he maligns our poor kangaroo for ‘soil loss’. Our soft-padded native kangaroo, creates soil loss. What about introduced feral livestock with hard hooves, wouldn’t they cause soil loss? Indeed, but they are off ACT Parks’ radar.

Parks assures us that while the cull is higher this year than last not to worry because it isn’t too many compared to the general kangaroo population. Is Iglesias comparing the numbers of kangaroos to be killed in Canberra’s Nature Reserves to the total numbers there or is he comparing numbers to be killed to the total kangaroo population of Australia?

No matter how good a year they have had, what with rainfall etc, each kangaroo can only give birth to one per year and of those born there is an 80% attrition rate, meaning only 20% survive. So it’s not like their population can double in 12 months. Besides the new kangaroos are still only joeys, 12 months old and dependent on their mothers. That means this year’s ‘cull’ will be primarily the killing of joeys since the ones not killed the previous year who are approaching 2 years of age are still not adults and only just independent of their mothers.

Hard questions need to be asked. For example:-

1. Has there been an official count of kangaroo populations on the six reserves where the killing is to take place?

2. Where is the proof and how did they arrive at the numbers?

3. Since the quota is 75% of the total estimated populations (3,427 out of 4,482), and since last year was a drought, where is the precautionary principle in action?

4. What if there is a drought next year (or any other disaster or epidemic disease which kangaroos suffer from) and you wiped out 75% last year, how can that be regarded as sustainable especially when the commercial quota is only 15-20%?

4A. Did you forget about the high to extreme risk or even certainty of a cascading of extinctions of various endangered species (insects, lizards etc.) if all kangas were removed altogether? Kangaroos are considered a keystone species in the ecosystem, that all other species relied upon for reasons relating to kangaroo dung. This means that if Parks "overshoot" with their killing total estimates and end up leaving no kangaroos in a particular area, that is likely to have a devastating impact on the species reliant upon the kangas' presence, including the endangered ones.

5. While kangaroos have lost their natural predator, the dingo, they now have a much more formidable predator i.e. humans (via habitat loss, feral dogs, foxes, barbed wire fences, cars, farmers with guns, hoons) and that is not even counting bushfires and drought. Why is Parks not factoring this in?

7. Why isn't Parks ACT introducing fertility controls (such as at Belconnen in 2008) or relocation.

8. Why aren't there wildlife corridors to help kangaroos move on should there be no more food for them in the future? If they could move out, there would never be a need for killing or relocating them.

9. What is the cost (yes the public is entitled to know) of shooting 3,500 kangaroos?

10. Will you be killing the in-pouch joeys or throwing them live into the pits with their dead mothers?

11. Will orphaned and bashed joeys be included in the death count?

12. Has there been any factoring in for kangaroos who will die from stress myopathy in coming weeks as a result of watching their families get murdered and fleeing in terror?

13. Would Parks ACT be willing to consider an urgent quote for relocation of the 'surplus' kangaroos?

14. Are livestock allowed to graze on Parks and Lands properties? If so, wouldn't that be more of a concern with regard to soil loss and overgrazing?

15. Has Parks ACT given any consideration to the effect of their 'culls' on wildlife-loving Australians, many of whom are right now unable to sleep or eat, suffering from depression and anger because of this 'cull'? What else would drive them to leave the comfort of their homes at night in sub-zero temperatures to go to the Nature Reserves and try to intervene, risking not only their health but also their lives (in case they are shot) and potentially their police records and finances (in case they are charged and fined)? 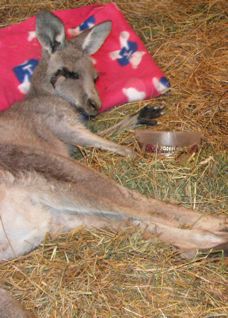 * envcomm@act.gov.au (Office of the Commissioner for Sustainability + Environment)

* Daniel.iglesias@act.gov.au (Member of Parks and Lands)

* David.lindenmayer@anu.edu.au (Member of Parks and Lands)

Or better still, go to Canberra and be present to watch and document the sordid massacre of our country’s national icon and their babies. That is one thing the killers hate, to be watched doing their dirty deeds. You might even be called to a protest. I hope there will be a huge one in Canberra one day, the sooner the better, with thousands of people rallying against the largest slaughter of land-based wildlife on the planet - i.e. kangaroos.

GETUP PETITION:
Please vote for the kangaroos. You can use up to 10 votes per issue. At present kangaroos are at #79 so we need more votes. Please get the word out to your friends. Thanks.
http://suggest.getup.org.au/forums/60819-campaign-ideas/suggestions/1142043-stop-the-shocking-cruelty-in-the-kangaroo-trade?ref=title