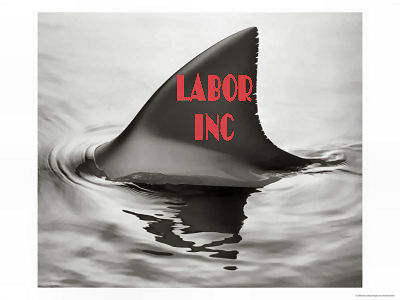 I have been putting off finishing a long and detailed article about why the Labor Party's business interests and the policies of Labor Governments in Australia are cause for disquiet. No, more than this, they give cause to question the right to govern of our governments. The area is so big and scary that one would rather read a novel or stare out the window. How to open up a description of the way I see our situation escaped me.

Tonight, however, I wrote this short article in reply to Peter Bright's comment, "Be fair; The Prime Minister has to overview the whole picture in the national interest, long term as well as short term. Although a Green, I believe that he and his government are being unfairly criticised and insultingly abused with insufficient cause."

The PM is forcing population growth on Australians and thereby depriving them of secure and affordable futures through driving resource scarcity. We have not been consulted. Not unrelated is the fact that he and Wayne Swann were also involved in the initial creation of Labor Holdings P/L and Labor Resources P/L see "Expert discusses 'deliberately confusing' Labor donations" in Queensland (when they were working for Wayne Goss in the opposition). These ALP-owned companies helped build up massive property holdings and insurance and development investments for the ALP.

The ALP governments, state and Federal, now resemble huge commercial corporations, far richer than the other parties in Australia and richer than many others in the world, according to Steven Mayne. Labor Holdings and Labor Resources are used by the ALP to hold donations and other payments so that those moneys will not have to be declared as ALP donations from their original sources; they are declared as donations or 'other receipts' from Labor Holdings or Labor Resources. You can, however, look up income tax declarations for Labor Holdings and Labor Resources here and see where their income comes from. Then, in the same site, you can look for the ALP's income tax declarations and see where the money goes to.

State Laws made for private profit against democratic objection

State governments control land-use in Australia. One must suspect that the laws that the State Parliaments make to privilege property development (e.g. Major Transports Facilitation Bill; DACS) also privilege the ALP's investments or those of their friends. The ruthless pushing of laws to override democratic objections is an indication of where the state and Federal governments' loyalty really lies.

The growing presence of property lobby professionals in government and as the major options in elections should raise alarm bells. See, for instance, the participation of candidates from or backed by the Property Council of Australia in elections here and here.

The Federal Government's pushing of population growth through high immigration is a way of keeping property and infrastructure development going (at great cost to the rest of us) - and that seems to be a major business of Labor Party investments in Queensland where Labor Resources and Labor Holdings started, although they go way beyond that state now.

The Federal Government's nearly successful attempts to finance private development through taxpayer funding in RuddBank is another indicator of the sick state of our parliaments.

Labor: In government or in business?

The relationship between the Labor Party's friends in private Lobby Groups, their people in government, and the staff in State investment companies (such as Queensland Investment Company) has been the subject of damning journalistic investigations. See, for instance: "In the murky world of lobbying ..." and It is now so blurry that I think you would have to be naive or not to have been aware of these vested interests to believe that our governments were in government rather than in business for themselves. But maybe it is hard for most people to figure out what this all means unless they already know the picture in the jigsaw.

What I make of all this is that our governments have crossed over the line between being governments into the area of being commercial corporations. And my next question is: Have they abdicated their right to govern since they no longer represent the electorate?

I think they have. I don't think that we have representative government in Australia anywhere anymore. Even under the Westminster system our governments are supposed to be seen to represent the public. Such representation is easily fudged around the edges on issues where cost and benefits are hard to pin down, but that is not the case here. It has become obvious that governments at state and federal level routinely benefit private corporate interests over the objections and interests of constituents by making laws to remove virtually all democratic rights to control the size of population, the ownership of public assets, and the extent of infrastructure expansion - whilst financing these undemocratic investments with taxpayers' money.

If the current government were governing in the interests of Australians it would not import 230,000 more people from overseas in the coming year (all needing houses) when housing affordablity in our country is said to be near crisis. The government is in fact thereby exacerbating a severe social ill. (article in The Australian today- "AUSTRALIA'S housing undersupply is at risk of becoming an entrenched economic and social problem, according to BIS Shrapnel senior economist Jason Anderson.") Of course the government response will be to throw (our) money at the private housing sector rather than rein in population growth. It would appear from the information in the above article that disclosure of all donations to political parties would not make transparent the donations to Labor Holding and Labor resources.

This needs to happen in Australia. Balanced Migration com * Declaration by Cross Party Group on Balanced Migration signed by 20 leading Parliamentarians including Baroness Boothroyd and Lord Carey * Declaration calls for manifesto commitments to reduce net immigration to the levels of the early 1990s – less than 40k compared to 163k in 2008 The Cross Party Group on Balanced Migration today publishes a ground-breaking Declaration on Immigration, calling on the major parties to make manifesto commitments to take action to prevent the UK population reaching 70 million in under 20 years, as is officially projected. 70 MILLION IS TOO MANY 1. We are gravely concerned about the rapid increase in the population of England that is now forecast. We note that the official projections show the population of the UK will increase from 61.4 million in 2008 to exceed 70 million by 2029. Over the next 25 years the population will increase by 10 million, nearly all of the increase being in England. 70% – 7 million – will be due to immigration. We believe that immigration on such a scale will have a significant impact on our public services, our quality of life and on the nature of our society. 2. We welcome the considerable benefits that immigration has brought to British life. However, we note that over the last decade immigration has reached unprecedented levels. Furthermore, we note that a major enquiry by the Economic Affairs Committee of the House of Lords found no evidence that net immigration generates significant economic benefits for the existing UK population. We note also that the latest household projections show that nearly 40% of new households to be formed by 2031 will be the result of immigration – approximately one every five minutes. 3. Accordingly, we call on the major parties to make clear commitments in their General Election manifestos to reduce net immigration to the levels of the early 1990s – that is less than 40,000 a year compared to 163,000 in 2008 – in such a way as to ensure that the population of the UK will not reach 70 million. 4. We recognise that this will not be easy to achieve. Over the last decade or so we have lost control of immigration. It will take several years to put this right. But the first requirement is a clear political decision to put in hand the measures required to restore control over our borders, to break the present almost automatic link between coming to Britain and later gaining citizenship, and thus take a range of further measures to limit the growth in our population. 5. We are convinced that failure to take action would be seriously damaging to the future harmony of our society. Nearly a million votes by our fellow citizens for an extremist party amount to a danger sign which must not be ignored. For too long the major political parties have failed to address these issues and the intense, if largely private, concern that they generate throughout our country. If politicians want to rebuild the public’s trust in the political system, they cannot continue to ignore this issue which matters so much to so many people. The time has come for action. Signatories to the Declaration on Population 1. Rt Hon. Frank Field MP 2. The Hon. Nicholas Soames MP 3. The Lord Jordan CBE 4. Daniel Kawczynski MP 5. Rt Hon. Michael Ancram QC MP 6. Peter Bottomley MP 7. Christopher Chope MP 8. Roger Godsiff MP 9. John Horam MP 10. Robert Key MP 11. Peter Kilfoyle MP 12. Rt Hon. the Lord Anderson of Swansea 13. Rt Hon. the Baroness Boothroyd OM 14. Rt Rev. and Rt Hon. the Lord Carey of Clifton 15. The Baroness Cox 16. Rt Hon. the Earl Ferrers DL 17. The Lord Leach of Fairford 18. Professor the Lord Skidelsky 19. The Lord Vinson LVO DL 20. Hazhir Teimourian