Mark O’Connor and Bill Lines’s Overloading Australia has only been out for a short time and the growthists are becoming hysterical. Their arguments are as hopeless as ever. One Telegraph journalist, Tim Blair, has even attacked Mark O’Connor for being a marriage celebrant. In a sort of three-year-old’s idea of getting married,

“Interestingly, O’Connor is a wedding celebrant. How he combines that with his opposition to population growth is anyone’s guess.”

It must be hard working for the Murdoch Press, where no-one writes sensibly about serious democratic and environmental concerns, presumably because they will affect sales on realestate.com.au which rely on continuous population growth of course.

And just when you thought it was safe to read Fairfax again (after the decent article on page 3 on Overloading Australia) they drag the recent expatriate, Brigid Delaney, in from the cold (she has just spent three years in London) to do a number on O’Connor and Lines.

Delaney starts out with some very old-fashioned cultural cringe. Holding up her subjective ideals of [battered] New York and [impoverished] London as ‘models of innovative and successful cities’, she stigmatises stopping population growth as ‘stagnation’. She implies that O'Connor and Lines's book calls for no immigration. This is not true.

What stopped her from urging Australia to have cities more like Calcutta and Mexico City, I wonder?

This does not compute

She says that Australians live 'high on the hog', then, instead of suggesting we should be less materialistic, she proposes more economic growth and lauds imported 'work ethics'. Is she really so stupid that she doesn't realise that work and economic growth mean more material production and consumption?

She even tries to sell the idea that failing to surrender our remaining quality of life to overpopulation for ‘diversity’ in order to have ‘economic growth’ may ‘slow the development of our inner lives’!

Frankly, if Brigid’s ‘inner life’ is as bereft of originality and cogency as her writing, I would urge her to seriously review her lifestyle goals.

The article reads as if she fell asleep between paragraphs and woke up forgetting what she had just written.

Fails to address content of O'Connor and Lines' book

Unable to counter the environmental concerns raised by Mark O'Connor's and Bill Lines's book, Brigid instead tries to frighten people away from the serious nature of these concerns, by implying that they are dangerous to articulate because they could be used by people to cloak a dislike of immigration for other reasons. She doesn't dare to directly slur the authors themselves, who are both seriously accredited environmentalists; instead she tries to stigmatise their subject as socially dangerous.

At the end she is conflating environmentalists wanting to reduce population with Nazis in Berlin wanting to stop immigration, because one might provide a cloak for the other! To me, it is Brigid’s arguments that are dangerous, because they seem contrived to polarise people away from their democratic right, of voicing their opinions about unsustainable political, environmental and economic policies.

She talks of how immigrants “energise their adopted countries; they bring new skills, culture, views and work ethic,” then later she describes xenophobia as rife in Britain.

Does she not realize that the people she describes as xenophobic are exactly the kinds of British immigrants we are accepting in droves here? People who will tell you openly that they came here to get away from the high immigration there, and, far from hiding under an environmental cloak, express no environmental concern or interest at all?

For one with such Macarthyist ideas, Brigid doesn't seem to care that the mass-immigrationists use their purported love of 'diversity' and 'multiculturalism' to hide their real agenda for Australia, which is to make an enormous amount of money at the expense of taxpayers and grab more political power at the expense of democracy and to hell with the environment. I hate to say this, but those selfish vested interests find most of their support and many of their members, in the mainstream media (which they also own, I forgot to say). Brigid's thesis in her article is unsettling for the reason that she really doesn't seem to know what she is talking about, but she is prepared to slur a seriously documented concern, and by association, the authors of Overloaded Australia, presumably to make a buck.

Australians should all be aware that Fairfax Press makes enormous amounts out of marketing Australian property globally through its domain.com.au, as well as in those forest-destructive pages and pages of real-estate advertisements and consumer lifestyle images.

It is sad that that is about all that the mainstream press can find as a response to widely shared and felt environmental concerns and despair about wildlife, water, soil and democracy. And it is sad that a journalist shows so little human concern for the feelings and intelligence of her fellows. It seems as if, only those who come from elsewhere, might have intrinsic worth. And, only other cities, not ours, might be worth living in.

Right at the end she comes out with what seems to be a bizarre confusion of high immigration with ecological diversity:

"A society without immigrants will be the social equivalent of what's happening to our gardens — less colour and movement, less diversity, a sort of homogenised, sun-bleached patch where the only things growing are the plants we've seen before."

This isn't Shakespeare. And she seems to be a true ecological illiterate. Apart from the counter-intuitive assumption that people cannot bear to live without constantly changing environments, right to the plants in their gardens, her statement doesn't make any sense. 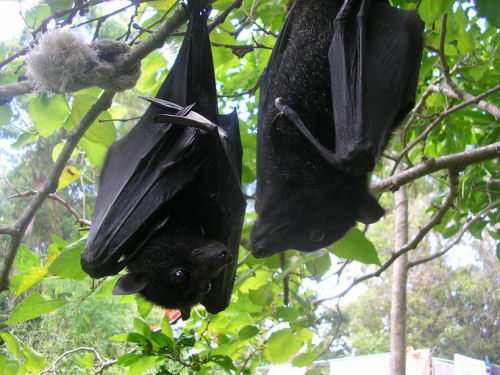 Fruit bats in an Australian garden (Photo by Julia Buch)

What does she mean by there being 'less colour and movement, less diversity' in our gardens? The only way that is true is where we have concreted them, deprived them of water, and where immigrant plants and animals: pencil cyprus, privet, aloe-vera, African agapanthus; Indian mynas and Euruopean blackbirds, European wasps and cane toads, domestic cats and dogs – not to mention the humans, of course - have taken over en masse and annihilated the indigenous diversity; the quolls, potoroos, snakes, lizards, butterflies, microbats, flower-wasps and rosellas, cuckoo-shrikes, honey-eaters, wattle-birds, magpies and kookaburras, which is so much more intense in Australia than in most places – making concrete New York and grey London seem like dead planets.

Overloading Oz does not call for no immigration

I just added a line to this article to clarify that Brigid's implication that Overloading Australia advocates no immigration is untrue. Sheila Newman, population sociologist home page

Brilliant article- another point is that couples intending to marry and perhaps have children want those children to have the resources to lead reasonable lives and raise their own children in circumstances which are at least as good as those they experienced and would probably applaud Marks' cause . Brigid's arguments are quite mad- there is a fertile field there for a clear thinking analysis massacre of just about every one of her assertions. Interest point hat she does not mention Calcutta or Mexico City- and if Australia is so boring why would anyone want to come. We must have somethng here that makes non- refugees leave family and friends to begin a new life here? I wonder what that is.....

I was surprised to see an article by Ziggy Switkowski in Thursday's Australian newspaper questioning population growth
www.theaustralian.news.com.au/story/0,25197,24976804-7583,00.html
Maybe an awareness of this issue is finally beginning to permeate the mainstream?

Thanks, for the good articles ...I am very interested..