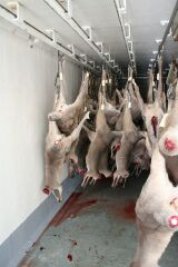 Australia's Defence Minister, Joel Fitzgibbon MP, has just been handed $26,950,000,000 to unjustifiably escalate Australia's military aggression, at a time when Federal Treasurer Wayne Swan says the world economy is gripped by the worst recession in 50 years. Labor's 2009 Defence White Paper indulges to the extreme, planning for so-called "Defence" (against what?) to receive some $146 billion in additional funding across the life of the White Paper to 2030.

Hypocritically at the same time, Fitzgibbon has rejected spending just $3.5 million to save thousands of Australia's grey kangaroos fenced in on Defence land at Majura training range just outside Canberra. And at a time when Federal MPs have just awarded themselves another pay rise of $4000 pa for 'electoral allowances'. It all stinks like British Parliamentary abuses.

Australia's kangaroos, stressed from people altering their habitat, have been denied their freedom to roam their traditional grazing lands due to it being bulldozed for selfish property development, due to drought, consistent shooting and from uncontrolled bushfires.

Despite wildlife ecologist Dr Dror Ben-Ami telling the review tribunal that the Defence Department has no assessments of any impacts caused by the kangaroos nor that the kangaroos pose any threat to any threatened species on the Majura range, Fitzgibbon has condoned the senseless slaughter of 4000 of a population of 9000 trapped kangaroos be shot in secret, just last Saturday, 9th May 2009. Fitzgibbon approved a similar massacre just on a year ago at the same place - it must be some idea of a sick sport to him!

Fitzgibbon says it is to reduce the kangaroos to 'sustainable levels'. How's the language?

How is this mass killing different to April 1994 when the Hutu militia hacked thousands of Tutsis to death in Rwanda, or July 1995 in Srebrenica when Serb General Ratko Mladic systematically selected and then massacred 8,372 men and boys 'of fighting age' (between the ages of twelve and sixty), or in May 2000 when the Sri Lanka Army used banned cluster bombs, multi barrel rocket Launchers killing 2,000 Tamil civilians in the island's north?

Just four days ago, 378 Tamil civilians were killed after Sri Lankan forces fired a massive barrage of artillery shells at Tamil Tiger rebels. Again the UN stands by - bit like how Pope Pius XII stood back while Hilter's Nazis massacred millions of Jews during WWII.

Like these human massacre, thousands of Australia's iconic kangaroos, have just as much right to life as humans, yet they are been similarly slaughtered in secret. Defence uses fabricated propaganda like the kangaroos being in “plague proportions” and “hordes” and “pests”, that their “populations have exploded”; that they “compete for pasture”; and the latest ludicrous example; “they are eating endangered species of grass”. All so as to spin the sick aim of "sustainable culling".

It's simply a ecological massacre. It has just been done in secret with approval of Joel Fitzgibbon. How is he any different to Sri Lankan Defence Secretary Gotabhaya Rajapaksa?

This tragic massacre deserves to be written into Australia's history as...

I feel ambivalent on the issue of Australian military spending. On the one hand many wars in which Australia has participated have been clearly immoral. These include: the Korean War, the Vietnam War, the invasion of Iraq and the invasion of Afghanistan. The latter two have been justified largely by the Big Lie of 9/11 of which I have written elsewhere on this site.

Nevertheless, there has been at least occasion in our history when a large expenditure on our armed forces was clearly essential, that being during the Second World War. Given the massive size of Australia's potential enemies in the region, it is hard to know for sure what amount of spending on our armed forces would be necessary to hope to dissuade or, if necessary, defeat, any military aggressor as it did in 1942.

Of course, our first line of defence should be a Foreign Policy which seeks to establish justice and harmony in the world. This is clearly not what the purpose of our Afghan military adventure is or what our Iraqi military adventure was.

Nevertheless, even if (for a change) Australia behaved like a model world citizen, I don't see that as being an absolute safeguard against military aggression from China, Indonesia or India.

Today some, including Bernard Salt spuriously justify the ever greater encroachments upon Australia's sovereignty by China, in particular, as necessary price to pay in order to prevent outright occupation.

However, if we don't have an adequate defence force as our forefathers did in 1942, that choice will be taken away from us altogether.

However, the difficult question posed in 2009 is to what extent that military expenditure will be abused to threaten world peace rather than safeguard our own borders.

For a contrary view, see Australian Military Buildup And The Rise Of Asian NATO of 6 may 09 on Global Research.

Ya can't splurge $26 Billion on a warchest and cry poor!

The biggest unaddressed issue of the federal budget is the massive war spend, while Rudd and Swan cry poor and utter innumerable cliches of belt tightening. How is this different to hubby getting a new SL-Class Mercedes because because, while the family budget cannot fund school fees, health insurance, housekeeping and bus concession tickets for the kids. The $26 billion largess is perhaps the greatest budget elephant in the room during any recession. Rudd deserves to win an award for spin so tantalising that none of the media nor opposition or Greens are critical. Wow, he could get a job at Clemenger in his after-life!