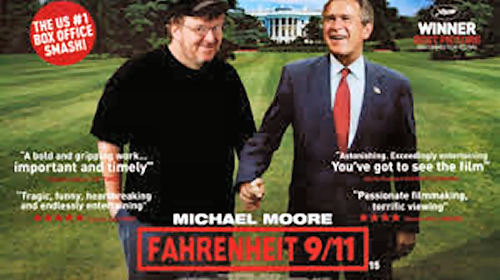 Michael Moore’s Fahrenheit 911, which dates back to 2004, has probably not been bettered. It is the highest-grossing documentary of all time. (Link to free online version by clicking picture). It stands out for its immediacy, in time and content, and its documented account of the Bush family and Bush regime’s links to oil investments, Saudi Arabia, and the installation of investment friends in the new government of Afghanistan, and the concept of both a domestic and a foreign war on terror.

Michael Moore has made a full text documentation and detail of the claims in the film at https://web.archive.org/web/20040715020956/http://www.michaelmoore.com/warroom/.

In the absence of the release of relevant documents, little new has emerged to explain the who and why of the crime, since Michael Moore’s film. President Trump promised to release classified 9-11 documents, unredacted, about the role of Saudi-Arabia, but in the end only highly redacted ones were made public.
President Biden has made similar promises, but we have yet to see the results.

Cause of collapse of the towers

Various groups have, however, made many allegations about the material facts of the crime. Notably there has been serious questioning of the role of the aeroplanes and their relationship to the crumbling of the first two towers, soon after the planes impacted, and then a third adjacent building, which suffered no contact with planes at all. Most people assumed that the first two towers collapsed due to impact of the planes, not thinking through the unlikelihood of this. Huge towers like the World Trade ones are expected to easily withstand the impact of a plane, although it would obviously do some damage. Additionally, most people did not know of, or did not attempt to explain to themselves, the collapse of an adjacent third tower (WT7), which no plane had flown into. Within these considerations, the impact of the aeroplanes would be irrelevant to any of these collapses. One would therefore assume that these apparent suicide flights were designed by someone to create a visual impression that many would take to be a cause, but that the actual destruction of the towers was accomplished in some other way, which could not have been accidental.