The timber industry is calling for more than a million hectares of NSW national parks to be opened to logging, including iconic natural treasures like Nightcap National Park.

This logging stands to severely disrupt and damage the habitat of a number of threatened flora and fauna species (e.g. Sooty Owl, Koala).

This koala was killed by loggers at Whian Whian, near Lismore, with the assistance of the NSW Police who prevented protesters from stopping the operation. 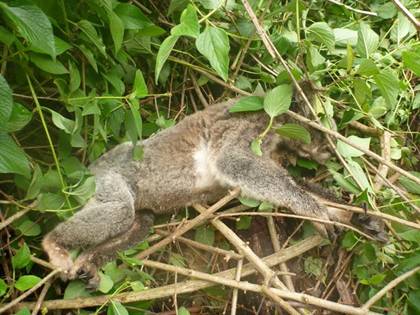 This is a cruel indication of what Barry O'Farrell thinks of koalas - just rubbish that must be cleared out of the way so loggers can profit from old growth forests. This was not the only animal to die, there were many others.

It's time to stop this madness. We should now be logging only plantations. The logging industry has had enough decades to plant its own resource without pillaging and plundering the last remaining ancient forests.

A lone protester sleeping on private property adjoining the logging site on Whian Whian Road was assaulted overnight by up to 12 people who caused head trauma and bleeding.

A logger hit by a falling tree branch at Whian Whian last week has passed away, the Forestry Corporation has confirmed.

The man was injured when a dead branch fell from a tree during a logging operation on private land at Whian Whian, striking him on the head.

The government knows the threats. A track built by the Forestry Corporation a few weeks ago, overseen by the EPA, has outraged forest campaigners who say it makes a mockery of the environment minister Robyn Parker’s promise that koala habitat would be maintained there and threatened species looked after. In the presence of the EPA, the North East Forest Alliance (NEFA) undertook further searches of two trees and found that there were more than 20 koala scats under them.

Huge numbers of discarded logs and branches now lay on the ground adding a significant fuel load to the area, and increasing the bushfire risk to the Whian Whian community. No koalas could be seen and the moisture had disappeared. The forest was grieving the death of itself, its inhabitants and a man. The "karma" of the area is fuelled by death and destruction.

Dailan Pugh , from the North East Forest Alliance, says an inspection of the site last week showed high-use koala habitat trees had not been properly protected.

He says it's a special site adjacent to the Nightcap National Park.

"We have all sorts of laws aimed at protecting threatened species, unfortunately they're poorly applied, they're poorly worded and in this case even though there is the potential to provide a modicum of protection, that's not being taken."

Mr Pugh said loggers have singled out 43 Parks and other conservation reserves in the region.

"There's lots of very important areas here and we've just got to make sure that we don't lose them."

According to new figures, each of the four native forest operations run by the Forestry Corporation of NSW made a loss, combining for a total loss of $7.9 million.